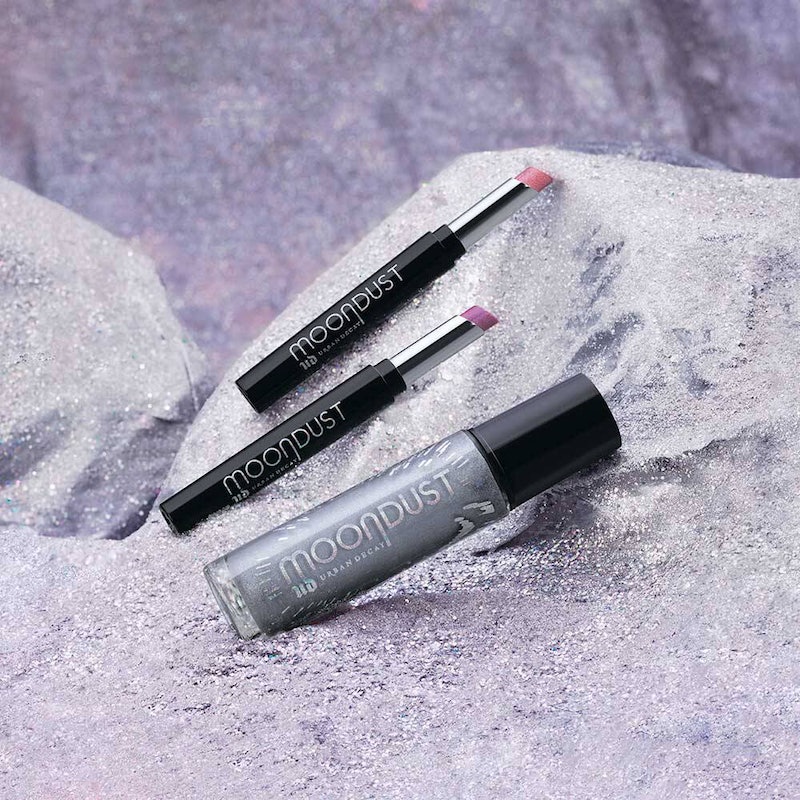 Urban Decay's iconic Moondust range has been the source of your sparkly eyelids for the past demi-decade. Now, it'll also be the reason your cheeks are glowing, your pout is sparkling, and your legs are somehow perfectly bronzed even though they haven't seen the sun in six-plus months. In addition to new eyeshadow hues, Urban Decay's Moondust collection got a full-body Glitter Liquid and four new lipsticks, too.

The brand introduced this vivacious line years ago with a spread of eyeshadows that promptly became cult classics, eventually leading to the launch of its now-legendary palette. As it turns out, the glitter trend still hasn't gone away. Rather, it's become even more mainstream now than when Moondust launched (Proof: Marni's Fall/Winter 2020 show was absolutely dripping in the stuff).

Keeping up with the demand, Urban Decay is widening its Moondust range to include more than just eyeshadows, which has in the past been its M.O. Starting Sun., the collection will also include a face and body illuminizer and a line of "multidimensional" lipsticks that are devastatingly shimmery, available in metallic mauve, sunrise gold, fiery red, and iridescent periwinkle, if you can even envision such a thing.

The MVP of Moondust 2.0 is its all-purpose Glitter Liquid. You apply it like a cream to your cheekbones, arms, legs, or wherever, then when it dries, you're treated to out-of-this-world shimmer. At $29 a pop, it's available in four shades ranging between silver and bronze.

Then there's the new Lip Eclipse line of pearlescent lipsticks, formulated with shea and cocoa butter, jojoba and avocado oils, and Vitamin E that helps keep lips extra soft and nourished under all that glitter. And it wouldn't be a Moondust launch without at least a few eye products, of course.

The new additions to Urban Decay's original Moondust Eyeshadow range (which already had more than a dozen shades) include Lithium, or greige; Specter, light pink; and Powder Trip, luminescent burnt orange. These promise bold color and "look at me!" shimmer without all the mess that other glitter eyeshadows make.

The reinvigorated Moondust collection will available starting Sun., March 22, on UrbanDecay.com as well as Sephora, Ulta, and select Macy's stores.