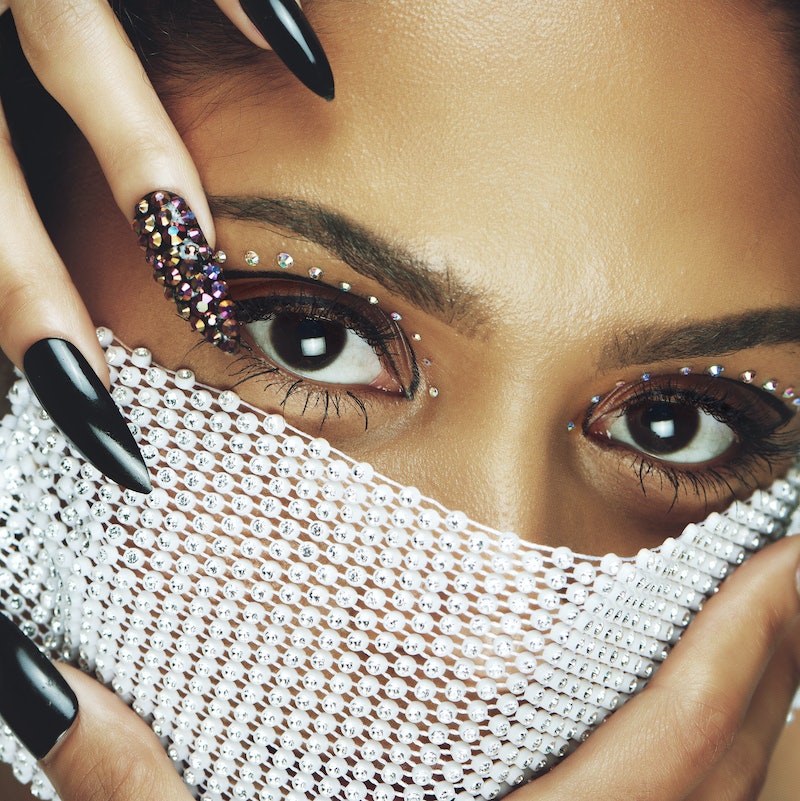 The beauty industry's severe lack of inclusivity has taken on a new urgency since being kicked up by 2020's Black Lives Matter movement and Sharon Chuter — brand founder and creator of the Pull Up for Change campaign — is paving the way. Her makeup label contains more than 50 shades of foundation and, now, one of the first products to cater specially to BIPOC lashes. Drama Bomb marks UOMA Beauty's delayed entrance into the mascara category, but it was worth the wait.

Sometimes it's the obvious lack of foundation shades for dark skin tones or a problematic usage of the non-universal word "nude;" other times, the industry's exclusionary nature is more subtle, like making mascara that doesn't cater to the needs of people of color. According to UOMA Beauty, Black women tend to have short lashes, and Asian women's lashes tend to be short and straight — yet mascara has long ignored short lashes entirely.

And so the objective of Drama Bomb is primarily to lengthen, then to volumize, thicken, lift, and simultaneously nourish and strengthen small lashes, instantly taking them "from nonexistent to 'damn girl'," a press release from the brand said. The formula is packed with natural ingredients like avocado, castor, and golden jojoba oils, rice wax, and vegan beeswax instead of parabens and other unwanted nasties. Additionally, an hourglass-shaped wand makes getting it onto each individual lash — no matter how tiny — that much easier.

The new mascara joins a range of palettes, falsies, a liquid eyeliner, and the highly popular Brow-Fro franchise in UOMA's eye category. It comes in full size for $19.50 and a mini version for $10.95, and it simply couldn't launch at a better time than during the face mask era, in which eye makeup is of the utmost importance.

Starting Sept. 25, you're likely to see the mascara accompanied by special Adolfo Sanchez-designed masks inscribed with the famous Martin Luther King, Jr. quote, "Silence is Betrayal." The bespoke covering is part of a greater campaign aimed at encouraging UOMA Beauty fans to vote in the November election. Shop the mascara at the center of it, ahead.