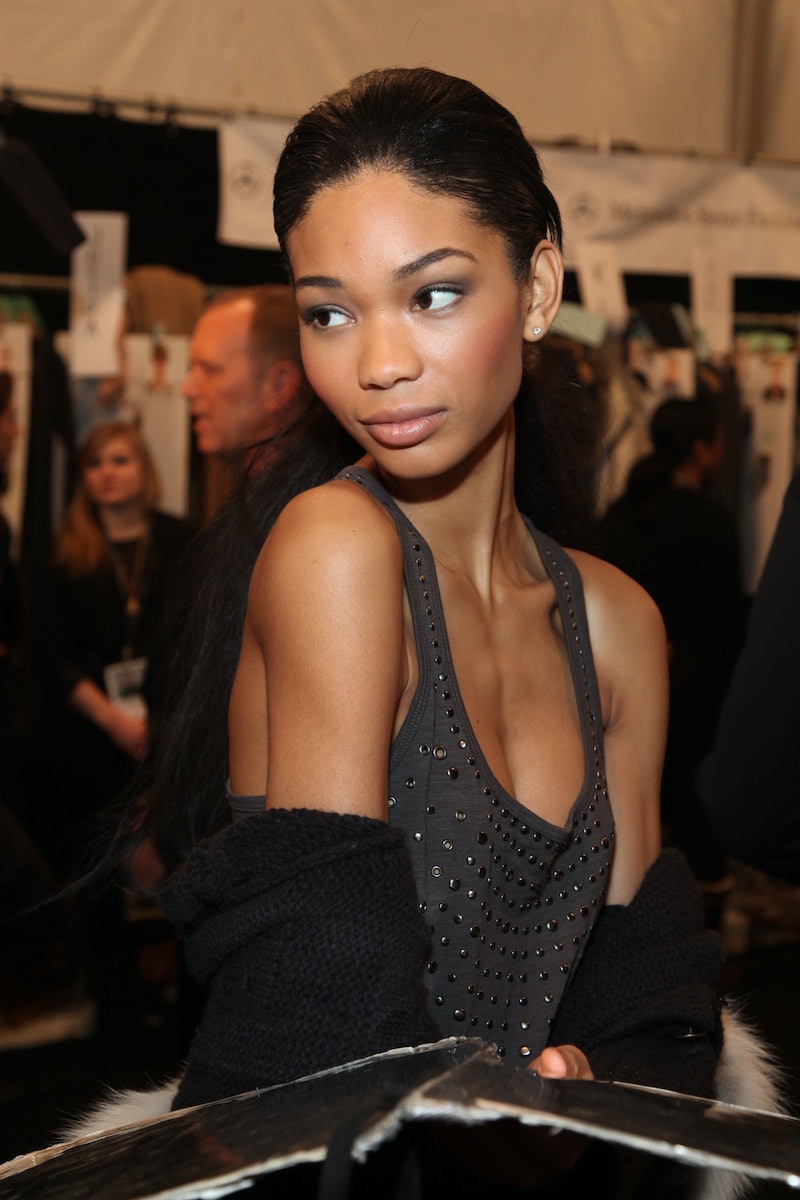 About 10 years ago, 2010's beauty trends were just as over-the-top as they are now, if you can believe it: the brows were bushy, the contoured makeup was swept on heavily, and the eyes were smokier than ever. The same can be said of the trends seen backstage at Fashion Month 10 years ago. In fact, many of those looks from the early aughts can still be seen on runways today.

"There are always versions [of the past]," makeup artist Dick Page, who's been a mainstay backstage during fashion month as early as the mid '90s, tells me over the phone. Though he doesn't believe in beauty trends, he does believe in the repetitive nature of the trend cycle. "I've lost count the number of times I’ve gone to a show, meeting the designer and stylist, and looking at the mood board thinking 'OK, I did that and that and that,'" he says.

Hairstylist Sam McKnight agrees that trends always see a revival. He says there's inspiration from decades before, but the look is modernized. "We like to look back, at happy times, times in our youth that might have possibly been more carefree," he tells TZR. "There’s a nostalgia to looking to the past, and styles that encourage us to reminisce."

In 2010, McKnight says there was a clear departure from the stick-straight hair of '90s to the "cool girl" hair that's still prevalent today. He describes the look as "barely straight with a hint of natural movement." And McKnight says there was an evolution of natural texture, as well. "Products and tools have greatly improved so different styling is now much more easily achievable," he says.

What other striking looks made their way down the runway 10 years ago? Keep scrolling to take a trip down memory lane.

"It's about perfection," makeup artist Tom Pecheux told Allure in March 2010 about the theory behind this look. "Perfect eyebrows, perfect skin, perfect cheeks, perfect contour, perfect lips." To achieve such magnificence, Pecheux skipped blush and eye shadow and, instead, contoured the face with highlighter and warm-toned powder.

McKnight was the mastermind behind the hair for Balmain's 2010 show. "The hair still had to be iconic Balmain, with that nonchalant carefree attitude, but more polished for that season," he tells me, describing the look as "grunge-plus." It was straight, but not a natural straight. "Every model had her hair washed and conditioned, then [we] blowdried the hair with a diffuser to create an air-dried feel. For those with wavy, curly, or frizzy textures, we stretched the hair whilst drying and smoothed with an iron." Minimal product was used, just a small amount of serum on the ends for polish.

Page has been the makeup artist behind Michael Kors' shows since the '90s. For Fall/Winter 2010, he says Kors wanted the models to look rich and warm. And with the layer on layers they had draped over them, the designer did just that. The goal was to create the look of a tan on the models, which was paired with a glamorous eye — a little unusual for the minimal Michael Kors aesthetic.

The messy, lived-in hair was courtesy of hairstylist Orlando Pita. According to Allure in February 2010, he sprayed the hair with his Orlando Pita + T3 Elevate Heat-Seeking Iron Volumizer (currently unavailable), and then gently teased it.

"Karl always treated his shows as theatre," McKnight, who keyed the show, says. "The iceberg was a giant backdrop, so the scale of the hair had to balance [the scenery] as the audience was at a distance." Ten years ago, dry texturizing sprays weren't available yet, so the look was achieved with a strong mousse and blowdried to create grip and hold. After, McKnight backcombed the hair at the roots to form lots of volume. Lastly, he gently smoothed the surface without losing its shape, and rolled the ends in to make a faux bob.

The makeup for the show was done by Peter Philips. Allure said in March 2010 that the eyes, the focal point of the look, were inspired by the texture of white boots in the designer's collection. The lids were painted with a gray-taupe shadow and black liner in the crease.

At Narciso Rodriguez, the brows were intended to be seen from the furtherest seats in the room. "You can see the paint strokes in them. It wasn't meant to look natural," Page, the MUA for the show, explains. "Even with blonde girls, we toughed up the eyebrows."

While the arches were as deep as can be, the eyelashes were barely noticeable. The British-born makeup artist admits he doesn't really care for mascara, which often gets him in trouble with beauty editors. "Sometimes the stuff you don't do on the face becomes as important as the ones you do," he notes about the lack of eye makeup. He compares this idea to opting not to accessorize a collection. "It tells a story about the way they see the clothing."

James Kaliardos told Elle in February 2010 that the beauty for Diane Von Furstenberg Fall/Winter 2010 was inspired by a woman changing and evolving "like a butterfly." He got the intense eye look by dusting shades of green and blue shadows on top of a black cream formula.

If there's one thing that has stayed consistent over the years, it's Jeremy Scott's ability to wow show-goers with over-the-top beauty looks. At its Fall/Winter 2010 show, the sky-high, slicked-back ponies were the life of the party. Elle reported in February 2010 that its lead makeup artist, Val Garland, was influenced by '90s supermodels for the look. The result: a mauve-pink pout and frosty eyelids.

"The collection is uptown girl meets Woodstock, and I loved that feel of it," Tom Pecheux told Allure back in February 2010. "Women in general are no longer just punk, just romantic, just Upper East Side — they're a combination. Now they have more freedom to mix those all together." The makeup Pecheux created for Peter Som's Fall/Winter 2010 is fairly simple to recreate today — all you really need is a bold plum lipstick. "It's a violet, matte, very metallic lip — and the hair will be dead straight. It's a gothic Betty Boop." And for the rest of the face, the makeup artist kept it polished with minimal color. The cheeks were mostly bare, with the exception of the tiny bit of silver applied to the outer corner of the eyes, which Pecheux blended down to the top of the cheekbones.

Laurent Philippon was the hairstylist behind the show. According to Allure in February 2010, his vision was to create simple, yet graphic hair. "We looked at [photographer] Steven Meisel's work from the '90s, and thought about doing something slightly Goth, but in a minimalist way," he said. You can easily try out the hairstyle at home, too. Philippon used Bumble and bumble's Prep spray (still available today!) to create a center part, and then straightened the hair in small sections.

Balenciaga co-signed the bold eyebrow movement, but in a slightly different way. Pastel arches on the models replicated bowls of sorbet. According to Allure in March 2010, the eye-catching brows were done by makeup artist Pat McGrath, who first bleached the hairs, then covered them with grease paints. "I just thought about the playfulness and the fact that it was like children's toys and I was thinking, 'Where can I put it?,'" she told Allure. "The eyes are kind of boring, so do it on the brows." And the sleek, groomed buns? The look was, of course, created by hairstylist Guido Palau. To get the slicked-back finish, he sprayed Redkens' Forceful 23 Super Strength Finishing Spray.

The poppy makeup for Marc By Marc Jacobs mirrored its Spring/Summer 2011 line. Page, the makeup artist for the show, says the orange lip helped animated the way the clothes looked. For the rest of the face, he gave the models a healthy glow. As for the hair, Palau was responsible for its frizzy, curly texture. "Marc liked the frizz so much he wanted to keep it," he told Allure in September 2010. "But I'm pulling part of it back so it looks a little younger, more girly."

"We wanted the models to look glamorous with an androgynous face. We play a lot in fashion in androgyny," Pat McGrath told Allure in September 2010. The focal point of the look was on the eyes. To make the eyes pop, McGrath opted for no blush or lip products. She applied a silvery eye shadow on the lids, and even skipped eyeliner and mascara. McGrath was on board with the bold brow surge that erupted in 2010 and created full, fluffy arches.

Palau was the expert behind the hair for the show. "It has a '30s, very lacquered feeling; a young girl in Cuba going to a dance," he told Allure backstage in September 2010. "It's sophisticated, but we wanted it to feel fun and frivolous."