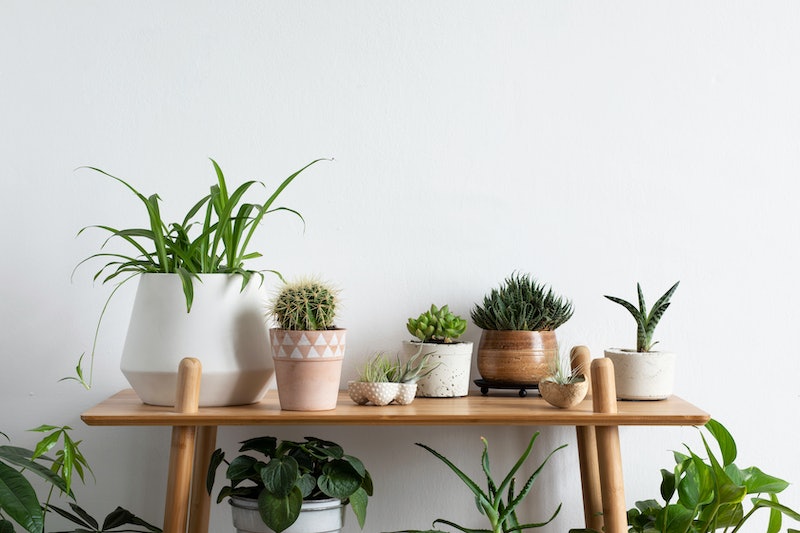 Lush, plant-filled spaces have become more coveted than ever over the past few years, sparking envy from anyone who wasn't blessed with a green thumb. But as it turns out, they don't always have to be so difficult to care for. And upon investigating the most popular houseplants — based on a study by e-conolight — it would seem that was a main criteria for those most searched and shopped. That said, the ones in the top spots might not be what you'd expect.

The lighting brand used Google Trends to discover which plants had been most searched per state over the past 12 months as well as the past five years, and the results showed that while some failed to budge from the top of the list, others were decidedly losing steam. As for those that appear to be waning in popularity? Bromeliads, Calatheas, Umbrella Plant, and Fiddle-leaf Fig, for example. Unwavering however was the desert native Aloe Vera.

So what makes some plants more popular than others? The Zoe Report turned to Erin Marino, Director of Brand Marketing for The Sill, to analyze e-conolight's findings for the five most popular plants in terms of their appeal, their best care practices, and even a suggestion for what other types to try if you've already got them at home.

Not only was aloe searched by far and away the most states (15 to be exact) over the last year, but it also got the top spot overall from the last five years. According to Marino, this could be due to its versatility. For one thing, they don't require excessive watering, which makes them easy to care for. "Aloes are desert dwelling succulents who need a ton of light and a little water to thrive," she says, noting that the light can be either direct or bright indirect.

Beyond that it also offers the added benefit of medicinal properties. "You can extract aloe vera gel at home from your aloe plant," Marino adds. However, if you need to cut your plant, she suggests picking a mature bottom leaf and cutting right at the base. The snipped leaf won't regenerate, but if you keep your aloe happy and healthy, new leaves will grow. And if you've already got one at home and want to try something similar, the plant experts recommends a Haworthia as a lovely addition.

This air purifying plant was most searched by eight US states, and Marino believes that's due to its classic aesthetic appeal. "Its traditional look and trailing shape have made it [a] popular houseplant indoors," she says. "It is a popular pick for hanging planters and baskets."

Common ivy is happiest outdoors, but if you want to keep yours inside, the plant expert advises giving it bright to medium, and mimicking the outdoor conditions (warm and humid during the day and cooler and drier at night) if you're able. You can also keep it looking lush by pinching off the tips.

Want to shake things up? Ivy lovers might also enjoy adding a Philodendron to their green family.

"African Violets are loved for their soft, coin shaped leaves, and their vibrantly colored flowers that are usually white, blue, or purple," says Marino of this plant that earned the third place slot for most searched in the US. To keep yours looking great, she suggests placing them in medium to bright indirect light and watering the soil (not the leaves or flowers) weekly. Additionally, you can simply pinch off the dead flowers to encourage new growth.

Got an African Violet at home? Try an Anthurium, which boasts long-lasting, exotic-looking blooms.

This fragrant herb tied for the fourth spot, likely due to its use in the kitchen and the fact that it's relatively easy to care for inside. "Basil does best in bright, indirect light, with a few hours of direct sun," says Marino. "Generally, windows with south or southwest exposure are ideal, but those facing the east or west will work as well. And if you live in an urban environment, make sure there’s nothing right outside your window blocking the light." Already growing basil at home? Perhaps some mint would be a good accompaniment.

This tall-growing houseplant, like basil, was most searched by three separate states. "The Dracaena is a popular houseplant because of its easy-going nature and its tolerance of lower light levels," Marino explains. "It can also grow upwards of 3 to 4 feet indoors."

She also notes that there are many varieties to choose from (her favorite being Marginata) so plant enthusiasts may be interested in trying a few at once — especially since they all require the same kind of care: Water just once every week or two, or when the soil feels dry. For a slight change of pace, Dracaena owners might also try adding a snake plant to the collection.