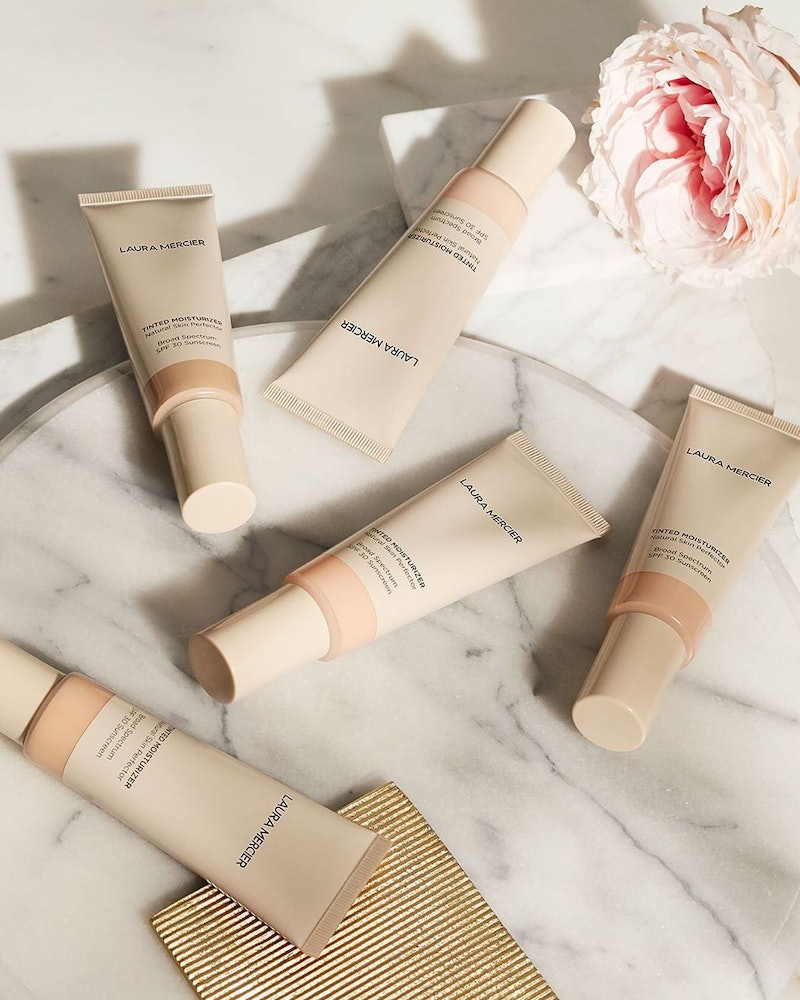 Tinted moisturizers are somewhat of an underdog in the cosmetic realm. They usually get pushed behind foundations, BB & CC creams, and concealers, but they're really makeup magicians in their own right. Whether you use them to even out skin tone, provide some sun protection, or moisturize and illuminate your skin, the best tinted moisturizers are more than glorified day creams, and there's an option out there that's meant to work for every skin type, tone, and texture.

I personally have always avoided tinted moisturizers because of my acne-prone skin and just assumed I'd be chained to a life of sweaty foundation every time summer rolled around — and boy, I've never been more happy to be so wrong. Yes, tinted moisturizers often lose brownie points because of their lack of coverage, and while they're not as opaque as your go-to foundation, they're steps above a transparent primer.

But before you start shopping for your next purchase, it's worth knowing what a tinted moisturizer is, since they blur the line between most kinds of face makeup.

Drawing a distinction between a BB cream, CC cream, foundation, and tinted moisturizer can be tough since they all overlap in some ways, but they do have differences. Tinted moisturizers are creams with a slight tint to them that are meant to hydrate the skin. They're great for people who prefer more natural makeup looks, are looking for lighter coverage, or just want something that doesn't require excessive blending every morning.

Tinted moisturizer's cousins — BB creams — are balms that focus on blurring uneven texture, but typically have a little more coverage than the former. This leads into CC creams, which are nearly the same as BB creams, but focus heavily on color correction (which is what the CC stands for). And the most different, but still closely related face makeup, is foundation, which tends to have a wider range of colors and can build up coverage thicker than any of the others.

This is the oil-free version of Laura Mercier's cult-favorite tinted moisturizer and it has earned more than 3,100 five-star reviews for good reason. It has a satin finish and is infused with vitamins C and E, which fight off free radicals and other environmental pollutants. It also provides a nice even color across your face that's supposed to last all day.

A potent mix of squalene and electrolytes on top of a mineral-based sunscreen probably explains the 1,700 five-star reviews this tinted moisturizer has. These ingredients moisturize and nourish your skin while delicately covering impurities.

More than 1,000 five-star reviews have been given to this tinted moisturizer. Its formula is easily buildable and wont dry your skin out because it's loaded with hyaluronic acid. Moringa seed extract is also included to help your skin battle free radicals.

If hyperpigmentation is something you're concerned about, this tinted moisturizer with 1,900+ five-star reviews has a vitamin C derivative to combat that and do what your favorite C serum does (hello, glowy skin). Mineral rich sea water and kopara are also featured to hydrate and revive your complexion.

Another tinted moisturizer to put on your radar is this one from Glossier that has 880 five-star reviews. It's not your usual lotion-based formula, but rather an oil-like substance that melds with your skin for sheer coverage and a dewy finish.

This formula has received a little over 600 five-star reviews and is ideal if you have oily or acne-prone skin, or simply just prefer better coverage. Its goal is to provide you with medium- to full-coverage face makeup that doesn't feel heavy like a foundation. The brand added its IonCharged water, probiotic technology, and chia seed extract to help soothe and nourish your skin at the same time.

This lightweight tint illuminates your skin and gives it a healthy glow. The formula glides on easily and features kalanchoe extract, which is intended to protect your skin. It's also SPF 30, so you're getting your daily sunscreen in the same bottle.

Vitamin C and sodium hyaluronate (the salt in hyaluronic acid) are mixed in this clean tinted moisturizer that has earned 1800+ five-star reviews. These ingredients along with black currant and peony flower root extract give you a light bit of coverage while getting rid of dull, dry skin.