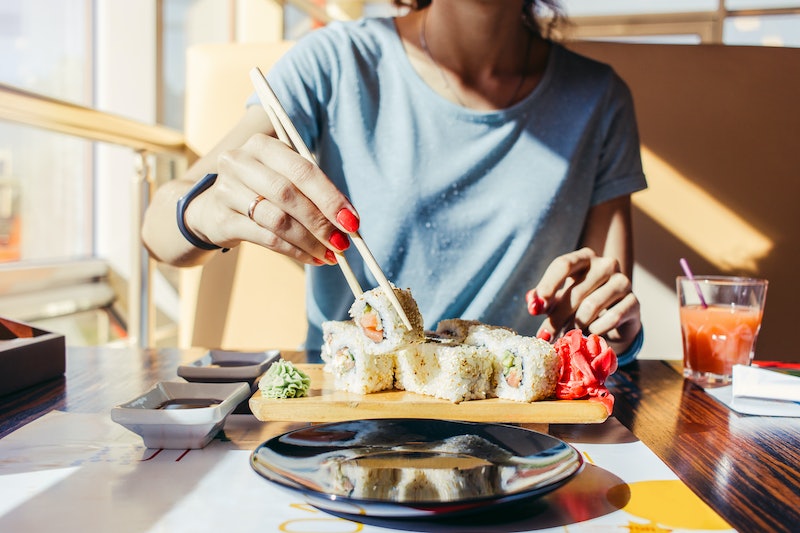 From keto to collagen, every so often there's a new food trend you can't seem to avoid hearing about, whether it's on the artful plates of your favorite wellness influencer, on the menu of the hippest, healthiest eatery in town, or in an article you're reading on a popular lifestyle site (well, hello there!). And of late, the algae food trend seems to be one of the buzziest around.

As is characteristic of some of the most coveted wellness ingredients, algae has already made its way into beauty products, as its known for offering skin benefits like boosted hydration and pollution-fighting antioxidants. But how does it work when ingested? Well, sort of the same, actually. "[Edible algae] is regarded for its anti-inflammatory and antioxidant properties," says Laura Farnsworth, certified Integrative and Functional Nutritionist. "Because many chronic health conditions are tied to inflammation, seaweed is considered a powerhouse health food."

Not only that, but according to Farnsworth, sea vegetables — like chlorella, kombu, wakame, kelp, spirulina, and dulse to name a few — are low in fat, high in protein, and are filled with vitamins and minerals that your diet may be missing. Algae is especially known for its high levels of iodine, which the nutritionist notes is required for adequate thyroid function.

Considering the fact that roughly a third of people aren't getting enough iodine, there's a good chance you could use some in your diet. And this is especially the case for pregnant women, Farnsworth says, who run the most risk of being deficient in the mineral. "Because the mother directly supports thyroid function for the growing fetus in the early weeks, it’s imperative that pregnant moms obtain sufficient iodine," she explains. "Quality dietary forms of sea vegetables can be considered after verifying the product’s reputation for safety and integrity."

However, before you go grabbing every kind of algae on the market, there are a few catches. Firstly, the nutritionist suggests being wary of taking algae by way of supplements, which can be too concentrated. Instead she advises eating high quality varieties of edible sea veggies (she prefers making vegetable sushi rolls with nori, adding wakame to miso soup, or sprinkling some dulse flakes into savory dishes) in moderate amounts. "At most, it’s best to begin with one to two servings of sea vegetables per week," she says. "As with many nutrients, having too little of a key nutrient can manifest in the body similarly as having too much of that nutrient. Iodine is a nutrient that requires a Goldilocks approach and synergistic micronutrients like selenium for optimal use."

And when you're buying your edible algae, one thing to take note of is the addition of preservatives and processed ingredients, which you'll want to avoid. "Carrageenan is a processed seaweed that is commonly used as an emulsifier, to act as a filler and a binder in non-dairy and dairy milk products," Farnsworth says. "Research findings suggest that carrageenan may negatively affect gut health or be a trigger for inflammatory gut conditions."

As for who should be be careful of algae, Farnsworth believes those with thyroid issues and/or autoimmune issues should consult a doctor before diving into the food trend. And while pregnant women can seriously benefit, they should also be clear with their physician about their intake to be as safe as possible.