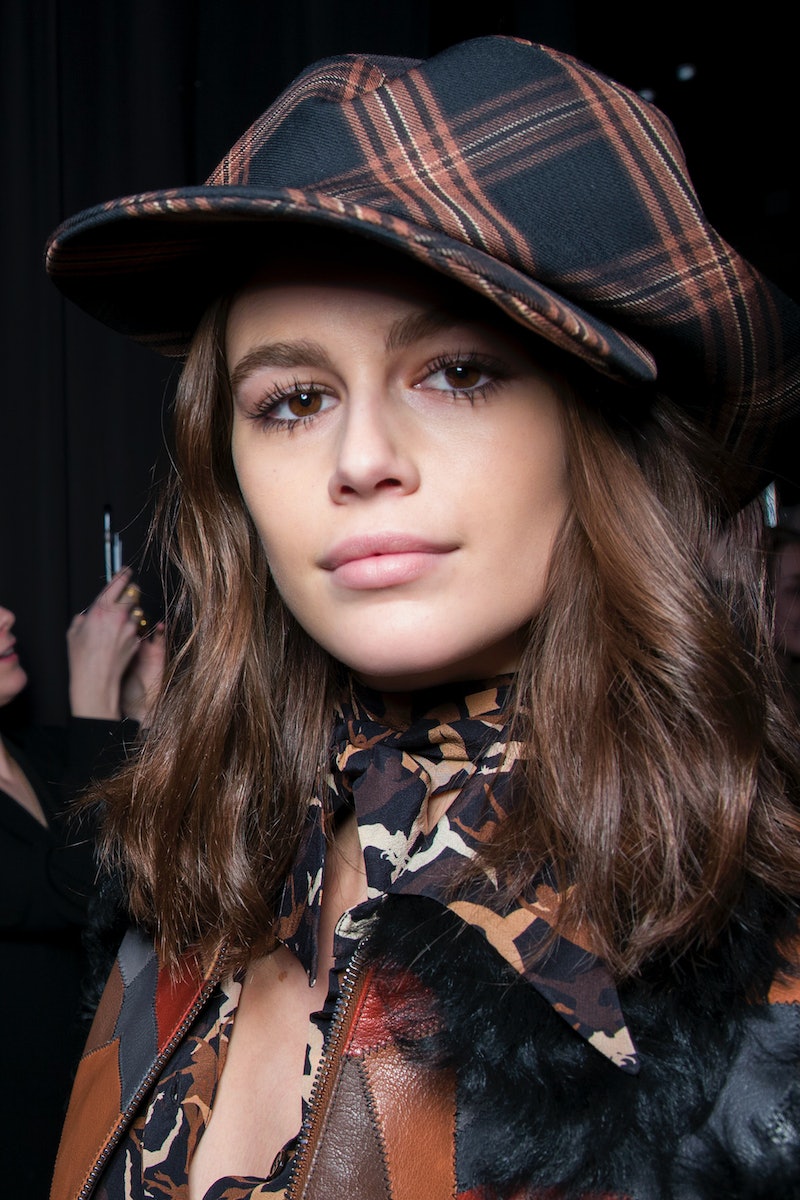 From a beauty standpoint, there's always been a sort of fascination with '70s beauty trends. From the disco hair to the Farrah Fawcett waves, the gilded eye makeup to the gorgeously bronzed makeup hues, the hair and makeup has always been the stuff of fantasy. Who hasn't looked back at their mother's old photos and thought, "I wouldn't mind rocking this look in 2019?"

Well, at the Fall/Winter 2019 shows during New York Fashion Week, hairstylists and makeup artists were all feeling a little Saturday Night Fever when it came to the beauty looks they conjured up. The clothes were the inspiration behind many of these looks, and the shows sometimes resembled a dance floor instead of a runway. Don't believe me? Barry Manilow crooned to Gigi and Bella Hadid during Michael Kors, and the models shook their groove things on the Staud runway. Other shows, like Naeem Khan, Kate Spade, and Rodarte also piled on the retro glamour that felt refreshing rather than dated.

Rodarte kicked off the week in Los Angeles, sending etherial-looking models down the runway wearing hair inspired by Jerry Hall, the beauty icon of that era. And lead makeup artist Odile Gilbert, working with Sultra, created the Bombshell 3/4-Inch Clipless Curling Rod to achieve the look. She wrapped the hair away from the face to create those classic '70s waves, breaking up the curls and brushing them for volume.

The inspo didn't stop up top, though: lead nail artist Steph Stone for Morgan Taylor painted on gorgeously frosted pastels. She filed the nails into pointy almond shapes to be reminiscent of '70s movie starlets.

At Michael Kors, the models were dressed up for what lead artist Dick Page called a "Michael party." Working with MAC, he created three distinct makeup looks. Some girls had a copper, black, and gold smokey eye, while others had violet tones swept across their lids. And others still had a little liner and mascara. But the main thing Page was looking for was undone makeup. "It's cab makeup," he explains. "It's not soup-to-nuts makeup." So he left the lines a little fuzzy, and the girls who had the smokey eyes didn't have liner or mascara. Who has time for those things when you're dashing off to the disco?

The makeup at Staud took a different approach to the '70s — that of Charlie's Angels California girls. Working with Maybelline, lead artist Erin Parsons achieved that by applying Maybelline's Fit Me Matte + Poreless Foundation onto the models' faces like moisturizer for a glow. Each girl got a shade one or two shades darker than their natural color in order to achieve that sun kissed glow.

The hair at Staud, however, was pure disco. Peter Gray for Cutler/Redken kept the top of the hair shiny and flat, allowing the bottom to air dry and flare out. He accented the styles with a little gold comb, which he kept in place with a tiny track braid hidden below the hair. The models danced down the runway like they were taking their turn on Soul Train.

The makeup look at Kate Spade was also a nod to the '70s — specifically Twiggy. "It's done in a thoroughly modern 2019 way," lead makeup artist Romy Soleimani tells TZR. Using Maybelline's Burgundy Bar Eye Palette, she created rosewood smokey eye which she then topped off with loads of black mascara for that true Twiggy look. The hair was long and wavy, topping off that '70s nod.

Finally, the hair look at Naeem Khan could be summed up in one sentence — "the bigger, the better." Tressemé lead hairstylist Justine Marjan actually used Velcro rollers to achieve the volume, before spritzing on Tresemmé Compressed Smooth Micro Mist Hairspray for serious staying power.

Call your mom and tell her she was right all along. Big hair and big lashes are back for fall and winter. Now, if only I can find my platforms...