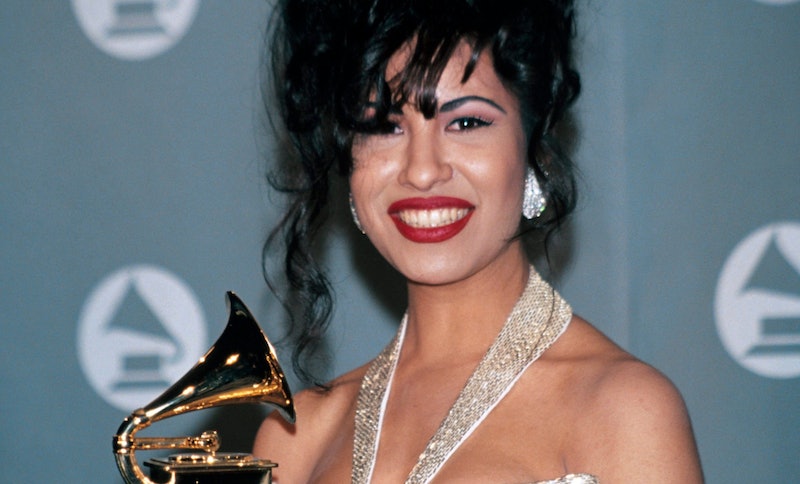 It'd be difficult to sum up the impact Selena Quintanilla-Pérez had on beauty in just a few words. To this day, a red lip, manicured bangs, and softly arched brows bring to mind singer Selena's iconic beauty looks, a decades-old trend that'll only be solidified with the upcoming debut of Netflix's new Selena: The Series on Dec. 4. In retrospect, it's easy to see how her makeup style bridged the gap between Old Hollywood glam and the new era of the strong and feminine pop star that bloomed throughout the late '80s and early '90s. Yet, at the time, it was just one thing: Selena.

Since then, the makeup world has continued to change and grow. You can't buy the L’Oréal Sangria nail polish that Jennifer Lopez wore to emulate the star in Selena. (Well, not new, anyway.) Selena's Chanel lipstick shade, Brick, was discontinued, only to be replicated later in a MAC Cosmetics x Selena collection. But if there's one lesson to be learned first from Selena's beauty looks, it isn't so much about the products she used, but the way that the Tejano superstar used them. Ahead, the most iconic makeup and hairstyles from Selena, because there's never been a time that her perpetually chic style hasn't been in fashion.

Flawless skin, a bold lip, and dark cat-eye liner are the Selena way to take on "everyday" beauty. However, the hair is just as important. Not just the bangs, but the texture — her long black hair was piecey and lived-in, as if she just finished dancing.

Selena's signature look — brick-red lipstick and slender cat-eye — felt extra glamorous when paired with the intricate white and silver dress she wore to the 1994 Grammys. There, she won the Best Mexican-American Album award for Live!, a first for any female Tejano musician.

Once you have bangs, it's easy to think of them as a perpetual must in your styling routine, but Selena always broke that mold too. The superstar pulled back her trademark fringe often for concerts or photoshoots, using '90s accessories like newsboy caps to frame her face.

Although she routinely wore brick-red lipstick that could easily be seen on stage, Selena incorporated all shades of red into her makeup wardrobe, like candy apple or deep scarlet. She wore nude pink lipstick on occasions, as well, though it was always just as precisely and opaquely applied with a touch of creamy sheen.