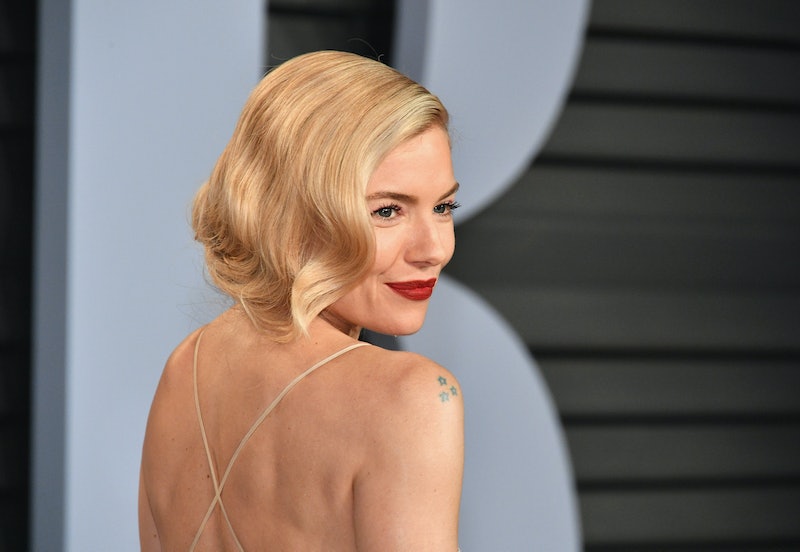 Get ready to travel back in time a few decades when you see Sienna Miller's glowy makeup at the American Woman premiere. The actor opened her latest movie looking like the modern-day version of Brigitte Bardot. With those dark lids and brushed blonde waves, it was a full-on '70s takeover.

Miller might have been raised in London, but she plays an all-American woman in her new namesake film, which premiered in Los Angeles Weds. night. The special occasion called for a glittery gold dress that Bella Hadid actually modeled during Ralph Lauren's Spring/Summer 2019 runway show.

The metallic hue and deep-V cut of the fit and flare radiated '70s vibes, and Miller's glam squad fully succumbed to the throwback theme, giving the actor a Bardot-inspired pale pink pout and dark eyeshadow with center-parted glossy waves.

Chanel makeup artist Kate Lee gave The Zoe Report a run-down of the look she gave Miller, calling it "a smoky khaki eye and tawny natural lip." The retro beauty routine is actually refreshingly simple to follow, too.

First, Lee prepped the actor's face with Chanel's Hydra Beauty Camellia Water Cream and Nourishing Lip Care, she says, then the first order of business was a layer of the complexion-perfecting Ultra Le Teint foundation and a dusting of highlighter from the Duo Bronze Et Lumière on the cheekbones.

The focus of the look was the lids, which Lee achieved by drawing Chanel's Stylo Yeux Waterproof in Jungle Green along the lash line and smudging it for a softer look. Then, with the dark khaki shade in Les 4 Ombres eyeshadow palette, she worked from the base of the lashes into Miller's sockets, finally finishing it off with the Ombre Première Gloss Top Coat Eyeshadow.

As for the actor's neutral lip color, Lee used the Rouge Coco Flash in the nude-like Chicness hue.

Abergel blew it out from roots to ends, swapping his Denman brush halfway down for an Ibiza round brush. Miller's "slight bends," as he calls them, were made with a 1.25" curling iron, then brushed out for that classic '70s effect.

To hold in place, Abergel finished the style with a spritz of Virtue Finale Shaping Spray, correcting any flyaways with the anti-frizz cream.

So, now that you're ready to recreate Miller's retro look, it's time to try your hand at home. A few key products you need for the look, ahead.