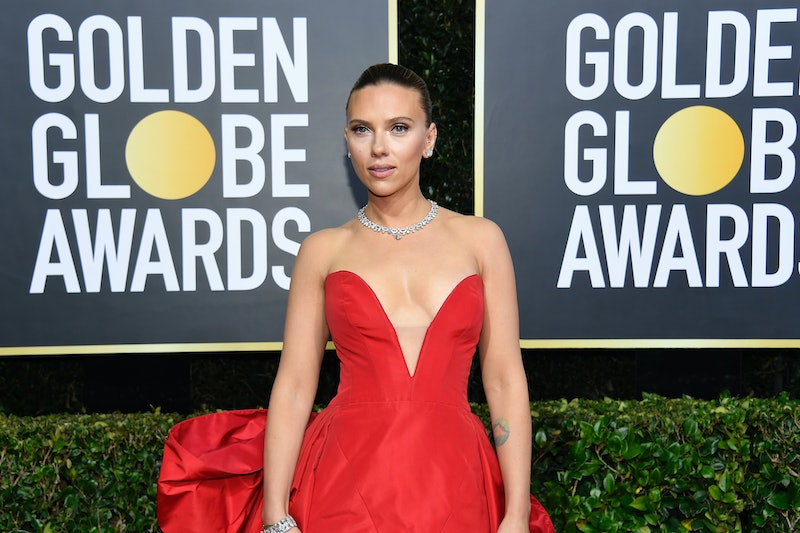 Just when you thought you'd seen all that the 77th annual Golden Globes had to offer, the stars switched gears and were off to post-ceremony gatherings where ensembles, like Scarlett Johansson Golden Globes after-party look, rivaled everything on the red carpet.

Ahead of the ceremony, the Golden Globes nominee hit the red carpet in a plunging red Vera Wang gown (made custom just for her) that brought a modern spin to Old Hollywood glamour. But, when it came time to head to the after party hosted by Netflix, Johansson changed out of her timeless, floor-sweeping dress into a pink feathered frock from Monique Lhuillier's Fall 2020 collection.

The Marriage Story star paired the playful mini-dress with Saint Laurent pointy-toe pumps and sparkly Bulgari earrings for the star-studded affair. Meanwhile, when it came to beauty, she kept her hair off her face in a sleek bun and went with a natural, radiant makeup look that allowed for all the attention to be focused on the whimsical, pastel-hued dress.

While celebrities like Billy Porter and Sofia Carson wore feather embellished looks for the awards show, ScarJo opted to go fun and feathery post show. And although the belted mini-dress was very different from her elegant ceremony gown, it was equally as eye-catching. Plus, it's further proof that you should have the feather trend on your radar for 2020.

Though the actress' red carpet gown hit on both the color of the night (which was red, in case you're just catching up) as well as the bow dress trend, her after-party look proved to be just as trend-forward. One of the biggest trends to come off the Spring/Summer 2020 runways was feathers, with Burberry, Prabal Gurung, Valentino, and more designer labels showing feathered-adorned pieces for the season.

Now, unsurprisingly, the head-turning trend has made its way to this year's award show fêtes. And it only seems natural, considering feathers are innately festive and practically beg to be worn to celebratory events. So, keeping that in mind, since there are still more prizes to be handed out, there's a pretty good chance you'll be seeing a lot more celebs sporting feathers this year.