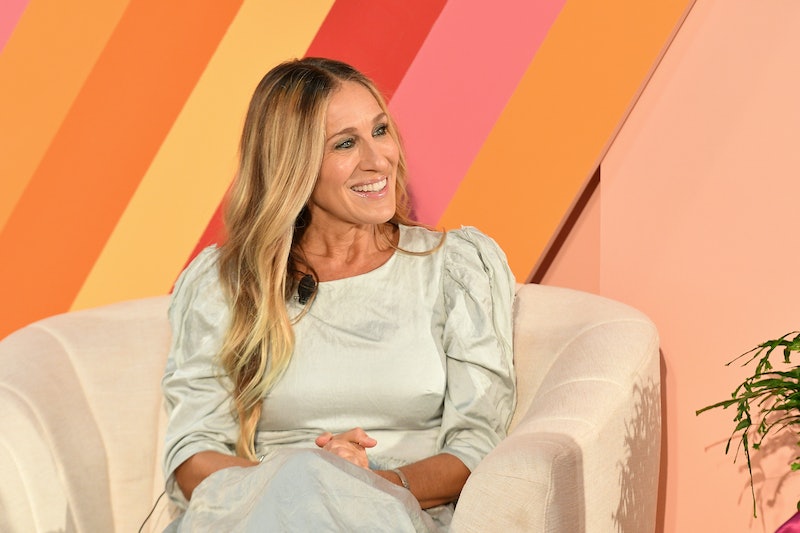 It's no secret that celebs tend to sartorially emulate their on-screen persona every now and then, whether it's intentional or not. Jennifer Aniston, for example, has had her fair share of style moments that paid perfect homage to the ever-stylish Rachel Green. Hilary Duff has rocked getups that Lizzie McGuire would very likely approve of, and last but certainly not least is Sarah Jessica Parker. The actor is perhaps the one celeb who consistently churns out ensembles that nod to her role as the iconic Carrie Bradshaw. Need more proof? Then draw your eyes to Parker's bold blue Michael Kors dress that would seamlessly fit into her fictional counterpart's wardrobe.

It was hard to miss SJP on the streets of New York City on Sept. 18. Dressed in a bright-blue midi-length frock, the style icon looked like she stepped straight off the Sex and the City set, thanks to her high-octane ensemble that, quite literally, shined from every angle, thanks to various metallic accents. How very Bradshaw, no?

The hero piece in her outfit was a blue Michael Kors dress that featured all-over studding, three-quarter length sleeves, a fitted waistline, and bold, sharp '80s shoulders. The piece hails from the designer's Resort 2020 collection and made quite a splash when it debuted on the model, who wore it with a white waist belt, a coordinating bag, and crisp white pumps.

SJP put her own distinctive spin on the styling because, well, she's SJP. She opted out of a waist belt, which allowed the dress' already cinched-in top to stand on its own. No white accessories were mixed in either, but rather a few glitzier ones that further upped the glam of her daytime look.

The actor slipped into her sparkly SJP by Sarah Jessica Parker Mary-Jane pumps that she wears all the time and finished off the daytime getup with a chunky chain necklace, a handful of bracelets, and a Fendi bag — all accouterments Bradshaw would, undoubtedly, also accessorize with.

As per usual, her long, shiny locks were in loose, beach-y waves, while her makeup consisted of a subtle smoky eye and a glossy lip.

Replicate SJP's (and Bradshaw's) style by shopping The Zoe Report's roundup of chic dresses that would seamlessly fit into both tastemaker's wardrobe.

Much like Parker's, this Michael Kors Collection dress has studs scattered throughout that add a dash of edge. Wear it for work and play.

This sweet and edgy LBD will be your new favorite. It features a bangle of beads at the hemline and a cute ruffle outlining the neckline.

Just like Parker's, this dress is rendered in a poppy blue hue. Emulate the actor's look by slipping in metallic pumps.