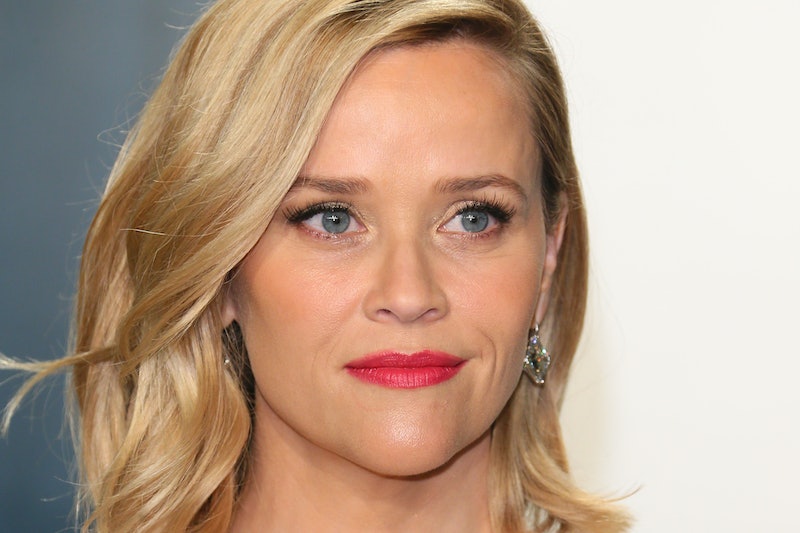 With all this extra time at home, there are two things you can be doing (if you aren't already). First, watching the new Hulu series Little Fires Everywhere, ASAP. Second, scrolling through Instagram to scope out all of Reese Witherspoon's at-home outfits. You'll quickly notice that, by no chance at all, Witherspoon and Elena Richardson (her on-screen persona) are surely taking style notes from one another. Both moms-on-the-go have sported luxurious power looks that are super similar, ticking boxes for both comfort and chicness.

On March 31, Witherspoon took to Instagram to share the first official episode of her new "Shine On At Home" series, which features uplifting conversations with different thought leaders on navigating life in quarantine. For her chat with New York Times best-seller Eve Rodsky, Witherspoon wore a patterned look that was polished and unfussy — in true Elena Richardson fashion. Past her blunt bob, Witherspoon sported a cream boat-necked sweater with cherry red striping, which popped cleanly off her pale blue wallpaper. Her mid-sized yellow gold hoops (a staple accessory for the actor) added a dainty touch to the at-home look.

Just days before that, she appeared in an equally-cozy ensemble to introduce the series, sporting an oversized marigold cardigan with a floral navy wrap top, which perfectly showcased her layered necklaces. She draped a pink strand of beads between her two delicate yellow gold chains, one of which dangled an engraved name plate. To finish the look, she kept her signature gold hoops look; and this time, slid on a pair of tortoise eyeglasses.

Both of the smart, sophisticated outfits were just a touch more casual than her on-screen ensembles, many of which fell right in the same color families. Take, for example, the red cardigan look Witherspoon's character wore in Episode 3, which was also dressed up with beads (pearls, of course) and a high-neck darted blouse for her family dinner at home. On her lower half, she donned a black center-buttoning skirt with a slim camel belt, which are easily interchangeable with cozy trousers for lounging. Her character's navy argyle cardigan from Episode 1 accomplishes a similar silhouette, trading out the oversized knit in Witherspoon's personal wardrobe and opting for something more snug. She styled it over a crisp white golf tee, and added matching pearls to complement her sparkling engagement ring.

Overall, both looks are true to Witherspoon's easygoing outfit formula, as confirmed through her always-engaging IG. To shop similar pieces from her Instagram (including her exact eyeglasses), continue ahead.