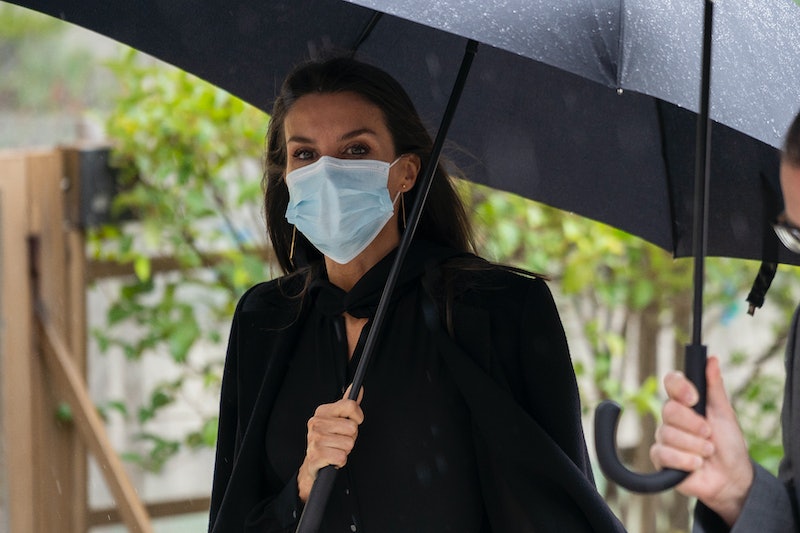 When looking at Queen Letizia's style file, you'll quickly come across tons of smart, polished pieces — suede pumps, belted pencil skirts, and plaid blazers, for instance — all of which are primed for ruling in style. That said, there are rare occasions when the Queen of Spain chooses slightly more laidback clothing items, the latest of which involved a surprising pair of casual, cool girl-approved shoes. Queen Letizia's combat boots are a relaxed alternate to her go-to heels, and they're ticking a box with fall's biggest footwear trend.

On Nov. 5, the royal was spotted out in Madrid, where she was walking to the FAD headquarters in the heavy rain. Though attending a meeting, the look she went with was notably bereft of the usual makings of a royal ensemble. Letizia chose an ankle-length, single-breasted trench coat, which passed on boisterous hues in favor of classic black. Underneath, she layered a simple knit long-sleeve in the same black shade, pairing it with pressed trousers in classic glen plaid. Then came accessories — a wide-profile clutch and a pair of black combat boots, which celebrities have been reaching for in record numbers as of late. To finish the look, she went with the classic, practical accoutrements — an oversized umbrella, for braving the wet weather, and her obligatory face covering. Overall, the entire look is the perfect understated outfit for a day of meetings, whether over Zoom or IRL — and you can likely recreate it with pieces that are already hanging in your closet.

Should you require a few new styles to pull it off, there's tons of options for getting her look — including The Row's Adonide coat, which is nearly a dupe of Letizia's. For her pants, Joie has a version that's on sale for 70% off — and they're extremely chic. As for her cult-loved combat boots, theres tons of brands putting their own spin on it — like Parisian footwear brand Clergerie, whose slightly heeled version helps to get the same look that Letizia nailed.

Recreate the whole ensemble with the styles ahead: