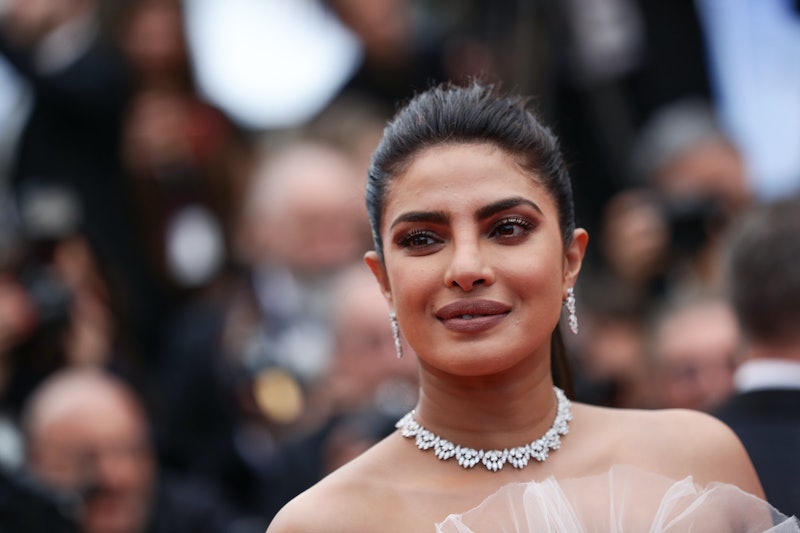 Now that there's no more Cannes red carpet on which to flaunt their outfits, the Jonas newlyweds have moved their personal runway show to the streets of London. The couple's one-year anniversary of dating called for a romantic evening at Nobu, of course. Priyanka Chopra's fringe sweater dress was the perfect date night ensemble.

After leaving the French Riviera, Chopra stopped by Ethiopia for a few days to show her support for the UNICEF-led programs there. She posted regular updates on her experiences bonding with schoolchildren and sampling Ethiopian coffee, urging people to donate to the cause on Instagram.

Now, the actor is reunited with her singer husband in London at last, and just in time for a very special anniversary. The two started dating around this time in 2018.

Naturally, the couple celebrated at Nobu on Thurs., Jonas in a simple blue henley and jeans and Chopra in a fringe-adorned sweater dress. Her white midi — pencil-cut and featuring a thick knit turtleneck — is by London-based designer David Koma. It originally debuted on the Fall 2019 runway with that same wide black belt around the waist. Chopra completed the look with a basic pair of black Casadei pumps and a shoulder bag to match.

Whether intentional or not, the dress is sort of reminiscent of her pre-wedding looks. Remember that Marchesa gown with the white feathery skirt Chopra wore to her bridal shower, or the feather-adorned white sweater dress she sported on a yacht in Amsterdam during her extravagant bachelorette party? Perhaps white, wispy fringe and feathers have come to symbolize her love for Jonas in some way.

In any case, her latest look adheres to the emerging focus on '70s detailing, but with an immensely chic twist. It's plenty romantic for a date night at Nobu or for your next girls-only wine bar outing all the same.

Chopra's dress isn't available yet, but there are similar alternatives to help you get her look, ahead.

Your average t-shirt dress made chic with tiers of fringe, this v-neck mini is also a perfect date night piece.

Opt for something slightly more casual, like this bohemian-inspired long-sleeved macramé mini with fringe trim.

This spring-ready sweater dress with just a touch of white fringe detailing deserves a spot in your spring wardrobe ASAP.

For a more formal evening look, opt for this satiny, gold-flecked party dress.