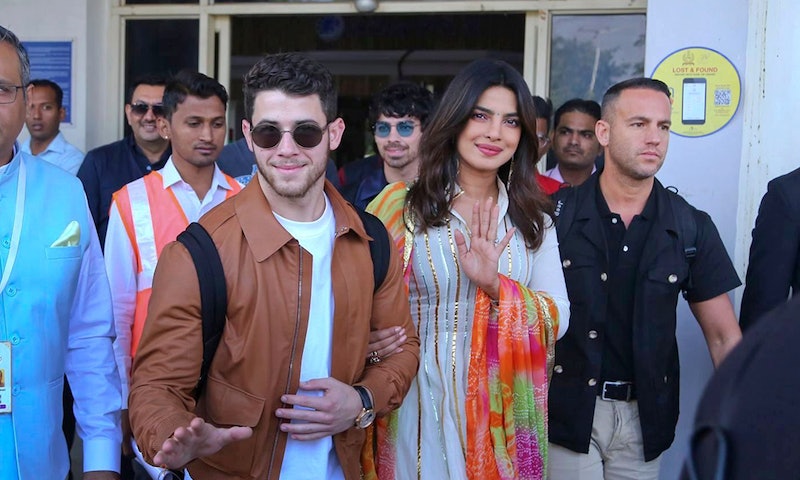 Hollywood's favorite couple just touched down in Jodhpur, India, which can only mean one thing: Priyanka Chopra and Nick Jonas' wedding is officially in full swing. The love-stricken actors got engaged in July after just two months of dating, and now they'll be exchanging vows in two days. The fashion-forward actor certainly isn't wasting any time to show off her bridal style, hopping off the flight on Thurs. in the prettiest custom dress.

Abiding by Indian customs, the couple has ditched the Western concept of a one-day wedding and is instead having a multi-day extravaganza in Chopra's home country. The festivities kicked off with a traditional puja ceremony on Weds. at the mother-of-the-bride's Mumbai residence. On the second day, the couple flew to their wedding destination, a city in the Thar Desert called Jodhpur, where they'll reportedly tie the knot at the Umaid Bhawan Palace.

Of course, Chopra upgraded her typical airport style for the special trip, opting instead for a bespoke dress by high-fashion Indian designer Abu Jani Sandeep Khosla. The long-sleeved, light-blue frock features both Western and Indian design elements, including a collared v-neck, a tiered skirt, and metallic detailing. Every seasoned traveler knows to carry an extra layer along on the plane, and the Quantico actor wrapped up in a multicolored shawl.

When asked about her bridal style just a month before the wedding, Chopra told Entertainment Tonight, "I always believed that anything and everything that I wear, I have to be comfortable and cute," so this custom airport-ready outfit certainly fits the bill.

The look — which was curated by celebrity stylist Ami Patel and her senior stylist, Rashi Morbia Kumar — followed a similar color palette to Chopra's outfit the previous day. On Weds., she sported a traditional Indian suit consisting of a baby-blue dress with cream and pink embellishments, mesh-cuffed pants, and a see-through shawl with lace and tassels on the trim.

People have been speculating about the always-fashionable Bollywood actor's bridal style for months, expecting her Indian-inspired looks to be designed by her favorite Sabyasachi or Khosla Jani and her Western-inspired outfits to perhaps be the work of Vera Wang, Marchesa, or Ralph Lauren.

The bride wore copious amounts of feathers leading up to her big day (remember the dress she wore to her bridal shower at Tiffany & Co.? Or the elaborate two-piece Georges Chakra set she sported during her bachelorette party in the Netherlands?), perhaps hinting toward incorporating the trend into her bridal gown, too.

Jonas stuck by his bride's side as they arrived in Jodhpur. He sported simple khakis, a white tee, white sneakers, and a leather bomber with shades. His former bandmate brothers and parents were, of course, in tow.

The couple is expected to participate in a traditional henna tattooing ceremony called mehndi, then sangeet, where they'll sing and dance, before the grand finale on Sat. Jonas and Chopra will reportedly have back-to-back Christian and Hindu ceremonies, and there's still many pre-wedding looks to come before then.