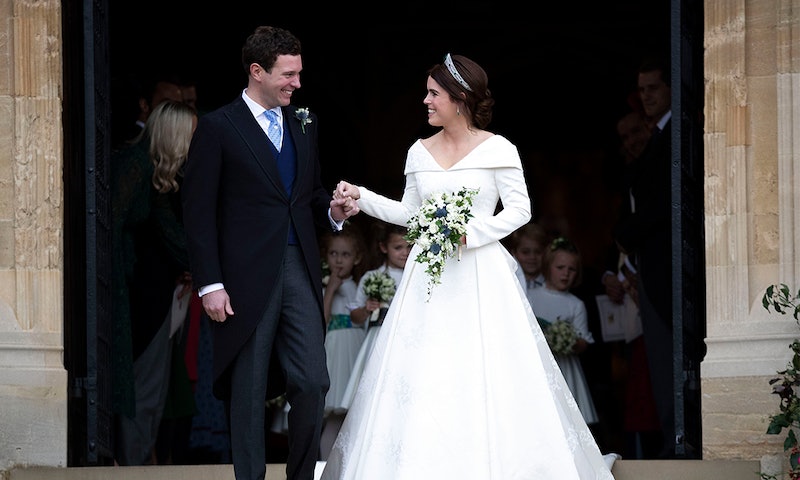 Princess Eugenie and Jack Brooksbank's highly anticipated wedding is finally here. Like all royals, the Princess kept her wedding dress details under wraps until the Oct. 12 ceremony at Windsor Castle. In addition to her stunning, backless gown, Princess Eugenie's wedding tiara was a beautiful, bold choice.

Eugenie opted against a veil and instead wore an emerald and diamond tiara from her grandmother Queen Elizabeth's collection. The dazzling headpiece is part of the "Greville bequest" collection given to the Queen by Margaret Greville, a friend of Queen Mary's, in 1942. The Greville Emerald Kokoshnik tiara is a century old, made by Boucheron in 1919, Kensington Palace revealed. The centerpiece of the antique is a 93.70-carat emerald set in platinum, surrounded by six smaller emeralds in a sea of rose-cut diamonds on either side.

A tiara is an essential accessory for any royal bride. Eugenie could have worn the York Diamond Tiara that her mother, Sarah "Fergie" Ferguson, wore on her wedding day, but chose to follow in the footsteps of Kate Middleton and Meghan Markle and borrowed one straight from the Queen's jewelry vault instead. The bride wore her hair in a wispy chignon styled by Sonny-Jo MacFarlane, which perfectly framed her diamond-and-emerald earrings (a gift from the groom).

Eugenie's tiara is in the style of kokoshnik, a kind of headdress that women in the 19th-century Russian Imperial Court traditionally wore after they were married. With its remarkable emerald center, the Princess' tiara is certainly more colorful than the Cartier Halo Tiara Middleton wore during her nuptials to Prince William in 2011, and the Queen Mary Diamond Bandeau that Markle chose earlier this year.

It isn't often that emeralds make an appearance in the royal wardrobe, either, although Princess Diana did often wear the Art Deco Emerald Choker that was given to her as a wedding gift by Queen Mary. The choker was part of the Delhi Durbar parure, and while it was mostly worn in its intended necklace form, Diana iconically wore it as a headband — earning her the name "Disco Di" — during the 1980s.

Born into royalty, Eugenie has been a princess all her life. She met her boyfriend of seven years, Jack Brooksbank, at a ski resort in Switzerland when she was 20 years old. On her wedding day, she opted for an open-back, long-sleeve gown designed by two of her favorite designers, Peter Pilotto and Christopher De Vos. The dress' lengthy train trailed behind her as she ascended the steps of St George's Chapel at Windsor Castle.

Eugenie and Brooksbank's wedding was filled with members of the royal family. Eugenie chose her only sister, Princess Beatrice, to be her maid of honor on the big day. Newlyweds Prince Harry and Meghan Markle returned to Windsor Castle just five months after their own ceremony, and Prince William and Kate Middleton also made an appearance.

Of course, Eugenie's grandmother Queen Elizabeth was in attendance, and she watched the Princess wed Brooksbank in the tiara she herself inherited 76 years ago.