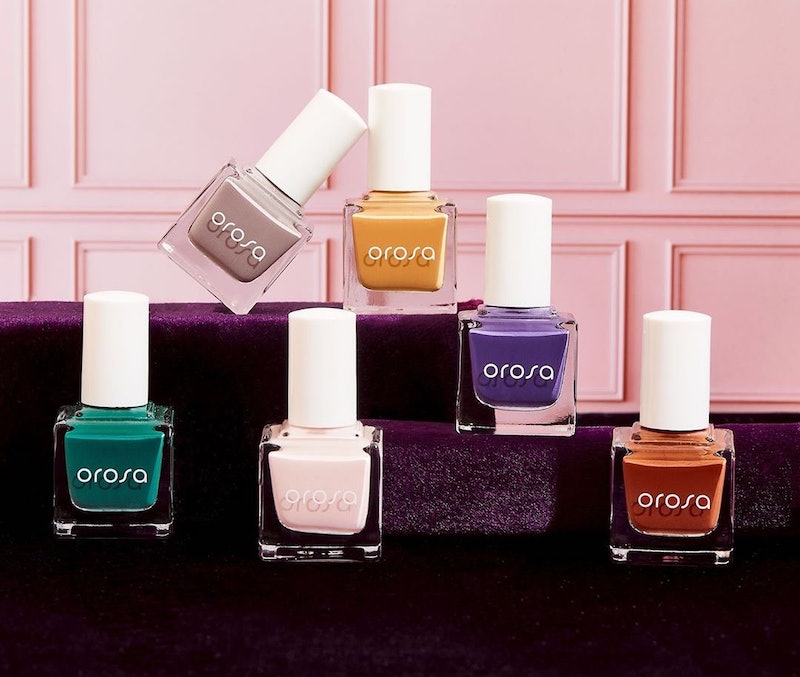 Nibbling on a pastry in the grandiose lobby of an old hotel after a long, picturesque train journey through places like Europe, sadly, won't be a reality for quite sometime. But until you can officially resume your travels, Orosa Beauty’s Night Train collection is taking on the challenge of transporting you to far away places this fall. Sans tickets and suitcases, this new line of nail polishes is the next best thing to actually boarding a rail car.

With most of this year's travel plans cancelled and falls getaways being shut down or restructured, the launch of the Night Train Collection couldn't have come at a better time. The $62 set features six new shades of lacquer, which you can buy separately, as a whole kit, or in two three-piece break-off series, adorably titled the Day Trip Set and the Scenic Route Set.

The color palette and names are nearly fit for a Wes Anderson movie, and the brand even drew inspiration from the experience of traveling through Eastern Europe. The power the colors have is proven by just looking at shades like the light pink Pâtisserrie and the emerald green Seat 103, which make it easy to picture yourself in a train headed up a mountain or checking in at the fictional Grand Budapest Hotel.

Predictably so, travel-inspired makeup like this has been popping up quite a bit during 2020. Just think back to OPI's Muse of Milan collection and the horde of new fragrances that have been released this year, like Valentino's Born in Roma, all of which contribute to that sense of escapism.

From these collections, it's clear that things like scents and colors can do a lot for the mind, and while Night Train's hues are reminiscent of getting away, they also reflect the shades that usually emerge come fall, giving you two in one: a mini vacation and a trendy lineup for this season's manicures.

Shop the entire collection, or just a handful of the new shades, below.