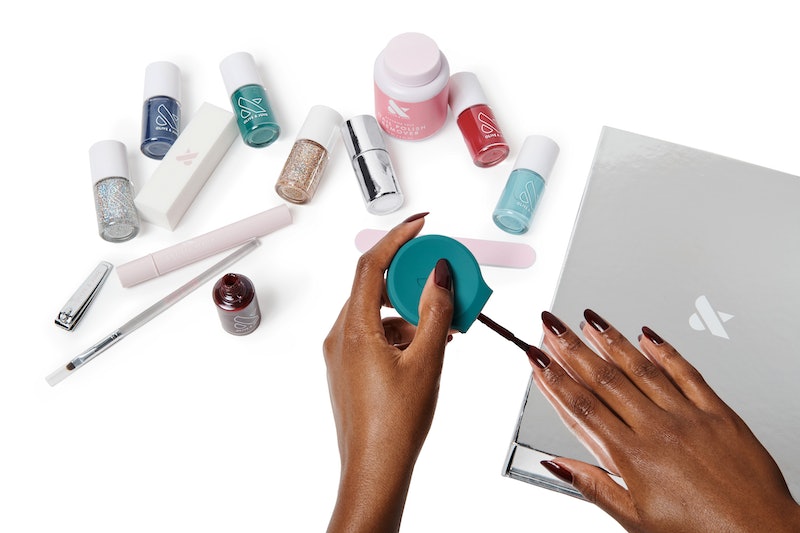 To truly embrace a holiday manicure, your fingernails should either represent mulled wine, flashy ornaments, or sparkly wrapping paper at some point during winter. This year, the Olive & June Winter Collection is making that easier than ever to achieve. Not only will you be armed with the best jewel tones, but you'll also have access to the brand's first-ever glitter polishes.

The brand gifted fans with the new collection on Oct. 16, offering single shades for purchase at $8 apiece, as well as two festive kits — The Winter Box and The Winter Set — at $94 and $72 respectively. This follows the launch Olive & June's advent calendar, and while perfect for the holidays, the winter hues clearly work for looks meant for New Year's and beyond. In the line are eight new shades — four jewel tones, two brighter shades, then two glitter lacquers — a first for the brand.

This arsenal of jewel tones include a dark garnet hue called Obsessed; Besties, a dark emerald green; a deep sapphire titled OMG; and a lighter ruby red named Nailfie Time. But not everyone likes to go darker when the seasons change. For those who prefer punchier tones even during the holidays, the line also includes a bold turquoise and hot pink.

Completing the line are Obvi and Exclamation Point, two glittery polishes that in actuality, provide major punctuation to any party look. The first is full of golden glitter and the latter contains holographic silvery sparkles.

It may come as a surprise seeing the usual sparkle and jewel tone polishes back this year, seeing that so many brands have been choosing unusual colors that aren't typically associated with the corresponding season. But Olive & June isn't the only brand still wholeheartedly embracing glitter for the end of 2020. OPI's winter collection was filled to the brim with sparkles, as well as Zoya's new holiday line Intriguing, proving that you can still get that classic splash of sparkle and color.

Get a jumpstart on your festive mani and shop all the tools and shades needed from Olive & June, below.