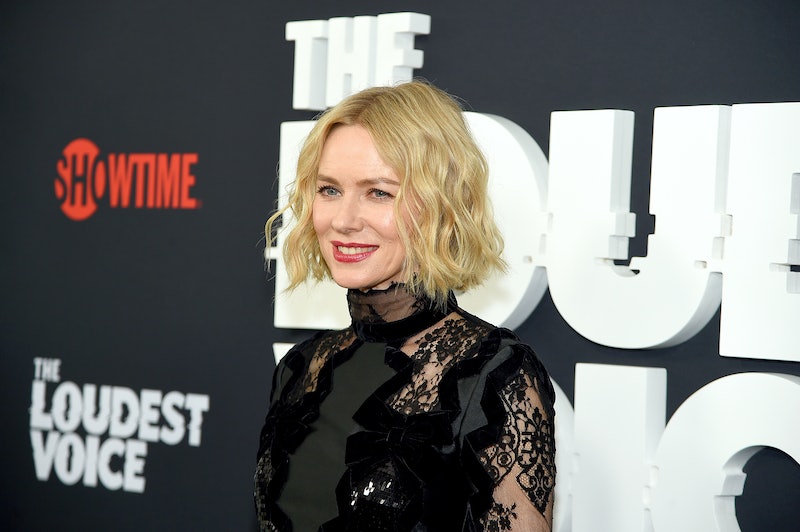 When watching an awards show, it can be hard to tell which came first — a celebrity's gown or their chosen makeup look. In the case of Naomi Watts' Chanel beauty look at the 2019 Emmy Awards, the black Christian Dior haute couture dress kicked everything off. "Inspired by Naomi’s gown, we wanted to do a classic beauty look with a fun bright lip," notes an interview quote from Chanel Makeup Artist, Kate Lee, in a press email.

And Watts and Lee weren't the only ones with vibrant lipstick on the mind. Coral lips turned out to be a major Emmys 2019 trend, with Brittany Snow, Jameela Jamil, and D'Arcy Carden also joining in. "For the lips, I wanted to build a matte orangey-red lip with depth and luminosity," said Lee. "I perfected it by starting with Chanel Le Crayon Lèvres in Mordoré - Nude and blending it with Chanel Rouge Allure Ink Fusion in True Red."

Though as you may suspect, building up this one-of-a-kind lip color was one of the very last steps in the entire routine. To begin, Lee dipped into Chanel's new Ultra Le Teint Velvet foundation. "For a perfect complexion, I damped a beauty blender in Chanel Hydra Beauty Essence Mist and applied Chanel Ultra Le Teint Velvet in 30 where needed," the makeup artist explained.

Then it was time to add in a multidimensional glow. "For a touch of shine, I applied Chanel Baume Essentiel in Transparent and rms beauty Lip2Cheek in Spell on her cheekbones for a subtle flush and a little dimension. I followed with a very light dusting of Chanel Les Beiges Healthy Glow Sheer Powder in 30, which is about two shades darker than Naomi but it added a soft, sun-kissed finish," Lee noted.

After a touch of Beautycounter's brow pencil in Light, Lee moved onto creating the glam yet minimalist eye look. "On the lids, I first used the light taupe shade from Chanel Les 4 Ombres in Blurry Mauve on the base of the lids and then used the bronze mauve shade of the quad to carve out the outer socket and build a warm glow," Lee said. "I then lined the inner corners of Naomi’s eyes with Chanel Le Crayon Khôl in Clair for some natural depth," she added — noting later that this extra touch creates "luminous and striking eyes."

After a swipe or two of Chanel's Inimitable Waterproof mascara in Noir — "my go-to red carpet mascara," said Lee — Watts was ready to take the red carpet by storm. And fortunately for you, each product from her look is available to shop now and listed below, so just keep on scrolling (though you will have to DIY your very own version of that perfect coral lip).