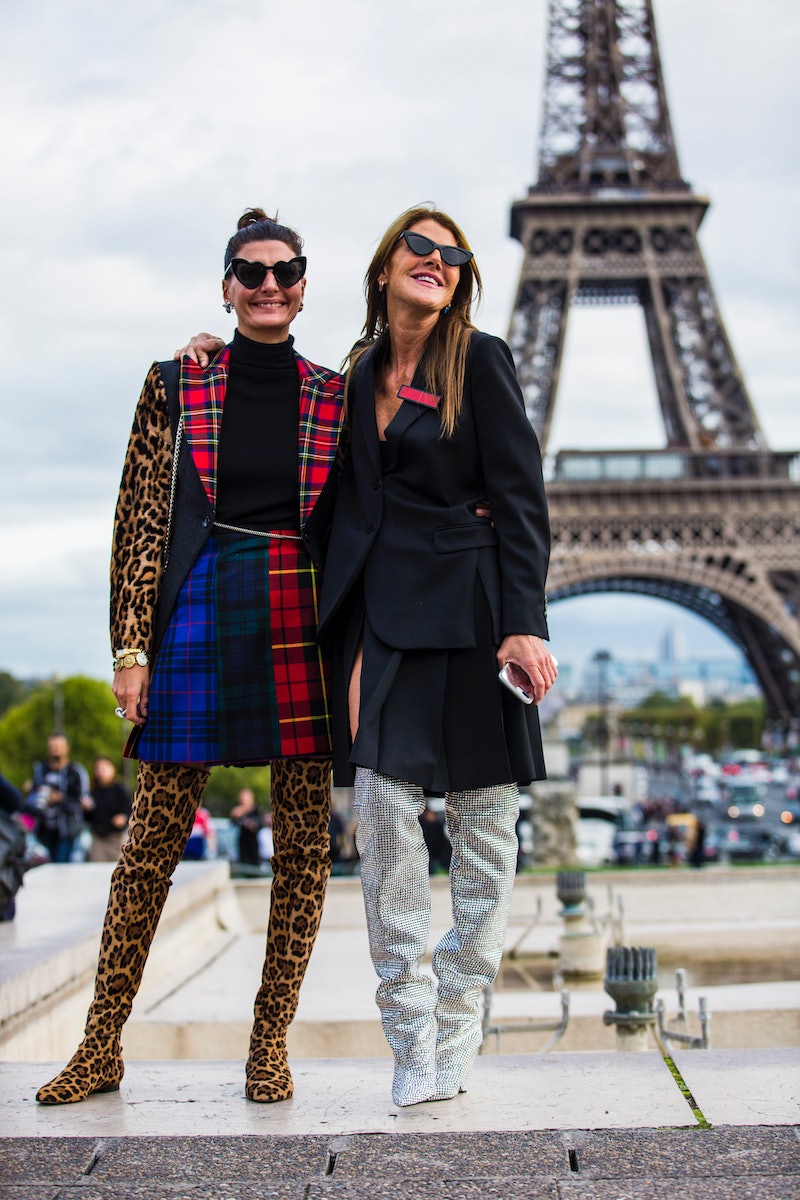 It's trendy to venture to destinations that are off the beaten path, and in this day and age, every corner of the world is more accessible than ever before. While a lot of these less-touristy places can offer the experience you're craving, let's face it: If Paris or Rome has always been on your bucket list, nothing can replace the real thing. Luckily, there are some genius money-saving travel hacks that make these otherwise pricey destinations more accessible.

Matt Kepnes, author of the New York Times bestseller How To Travel The World On $50 A Day and founder of the blog Nomadic Matt, knows a thing or two about traveling on the cheap. Here are a few of his general rules:

Bailey Freeman, destination editor to South America and Antarctica for Lonely Planet adds that the "key" to finding lower fares is to travel in the off-season. "The off-season refers to the time of year that a destination sees the least visitors, usually this is due to weather patterns and/or vacation schedules," she explains. "Because fewer people are traveling to the destination during this time, booking availability is higher, which leads to lower prices on everything from hotel accommodation to park or museum entrance fees." (This could be why off-season vacations are becoming a popular travel trend.)

Whether you're dying to tour Kensington Palace, take in the view from the Burj Khalifa, or see a Broadway show, get ready to book your next trip. Ahead, travel pros share some insider travel hacks to saving money while sightseeing and eating in some of the world's most expensive destinations.

Evan Godt, managing editor at Lonely Planet, explains how the timing of your trip to Paris can pay off. "The first [Sunday] of any month, you can get into all the most famous [national] museums — including Centre Pompidou, Musée d’Orsay, and the Louvre — for free."

He mentions that "serial sightseers" can take advantage of all-inclusive passes. The Paris Museum Pass includes admission to more than 50 sights and monuments for two, four, or six days, and the Paris Passlib includes unlimited transport to hot-spot zones, an optional add on for a skip-the-line Eiffel Tower ticket, and more.

"There are also a number of free things to do in Paris," Godt says. "Make sure to picnic in Jardin de Luxembourg or stroll through Cimitière du Père Lachaise [Paris' largest cemetery], where you can visit Édith Piaf, Jim Morrison, and Oliver Wilde."

To cut costs, Kepnes plans his sit-down meals for lunch, not dinner. "Going to restaurants in Paris is not cheap," he points out. "It will cost you an arm and a leg to eat here but during lunch, restaurants do a pre-fixe menu for between 10-15 Euros [$11-17]. It’s the same food you would buy for dinner but at half the cost."

Godt says that when eating out in Paris, he has a handy phrase that helps save cash. "My favorite travel hack is to order une carafe d’eau [tap water] when I’m at a restaurant. In France, if you’re ambiguous, the server may just bring you bottled water." And when you just want a quick and cost-friendly meal? "For cheap eats, check out the city’s oldest covered market, Marché des Enfants Rouges," he says.

“One of the best things about London is that nearly all of its museums are free to enter," says Godt. "There’s a discount theater booth in Leicester Square if you’re interested in other forms of entertainment. And, for getting around, hop on a city bike for the first free half hour."

In addition to visiting museums, Kepnes adds that there are tons of no-cost things to do in London, like taking walking tours, seeing churches, and strolling through markets and public parks. (Check out his post on 70 free things to do in London.) But if you want to see more major sights, Stephanie Bolling, travel expert at The Penny Hoarder, says a pass is worth the money. "Invest in an inclusive London Pass if you’re planning to sightsee with admission into attractions like the Tower of London, Westminster Abbey, and St. Paul’s Cathedral," she suggests. "For a flat fee — best purchased online in advance — you get entry into all of them and can skip the queue."

And when it comes to hopping around the city? "Buy an Oyster Card," Kepnes suggests. "This prepaid card can save you about 50 percent on each metro. If you leave and have extra on the card, they will also refund the balance."

It's no surprise that eating out in London can get pricey. However, you can enjoy the comfort food of a classic pub lunch, or grab a quick bite at one of the many food carts in town. Not to mention, you can scope out one of the city's many markets for cheap eats or ingredients to make a simple meal wherever you're staying.

It's the city so nice, they named it twice — but things are twice as expensive, too. However, Kepnes explains in his New York City Travel Guide that many of the city's world-famous museums offer free admission during certain times. "The Whitney Museum of American Art is free on Friday, the Solomon R. Guggenheim has 'suggested' donations after 5 p.m. on Fridays, the Museum of American Folk Art is free, the Cooper-Hewitt National Museum of Design is free on Tuesday evenings, the Steuben Galler is free, the MET is free (suggested donation is $20), and the Museum of Modern Art is free after 4 p.m. on Friday." Godt adds that other free attractions include Central Park, the New York Public Library, and the Staten Island Ferry, which "offers an amazing view of the Statue of Liberty."

Itching to experience a Broadway show? If you're up to see any of them (you really can't go wrong), Kepnes advises scooping up some same-day tickets. "The TKTS stand in Times Square offers 40 to 50 percent off select shows," he says. "You need to arrive at the counter the same day to see what they have, but it’s usually a widespread and good selection. Be prepared to wait in line for about an hour. TKTS also have offices at the South Street Seaport and in Brooklyn."

If your goal is to tour as many New York gems as possible, Kepnes suggests picking up the New York Pass for admission to over 100 attractions, including the Empire State Building, Top of the Rock Observatory, Madam Tussauds, a hop-on hop-off bus tour, and tons more.

While "the city that never sleeps" is home to some of the world's best restaurants, fine dining comes at a cost — but it's not your only option. "Food trucks were a New York City staple long before the national craze," says Bolling. "Have a mouth-watering meal or two at one of these in lieu of pricey restaurants." Another tip? "Find the bars that give you food freebies with a drink order. Rudy's doles out free hotdogs and popcorn all night and the Crocodile Lounge hands out free mini pizzas."

Kepnes adds that seafood lovers can get their fill at $1 oyster happy hours, adding that John Dory Oyster Bar and Jeffery’s Grocery have "the best deals." What's more, you can always duck into a corner pizza shop and grab a slice — you're in New York, after all.

Good news for those craving la dolce vita: "Rome is one of the more affordable big cities in Europe, if done right," says Bolling. "See Roman ruins scattered throughout the city for free. If you want admission to a popular attraction, buy admission in advance online to skip lines and save on the door admission price." You can also grab a metro pass and utilize the public transit system, although the city is incredibly walkable.

Godt adds that, like Paris, the museums are free on the first Sunday of every month. You can also purchase package passes online to get more bang for your buck.

Let's face it: One of the major reasons to visit Italy is for the food, right? "Save money by never eating on a main street, or stopping in a place with someone outside pushing a menu," advises Bolling. "Those are overpriced tourist traps. Walk down side streets and find a local spot to enjoy that trademark Italian cuisine ... Just be mindful that some restaurants and cafés charge you to sit down, so opt for standing room if you’re on a budget." These off-the-path places, she says, often offer wine by the half liter for under five bucks. Or, you can always grab a snack at the market, a slice at a pizzeria, and let's not forget the countless gelato shops.

What's more, coffee connoisseurs won't be disappointed. "Rome is probably the cheapest city to stay caffeinated in," says Bolling. "Walk into any local coffee shop and buy an espresso for €1 [just over $1]. Skip the pricier 'Americano' and don’t order a cappuccino after 11 a.m. if you want to live like the locals."

“At first glance, Dubai might strike you as flashy and almost indecently expensive," says Godt. "But beneath the excesses, there are things to see cheaply, like the souq markets in Deira, Karma, and Bur Dubai." He says to save money, opt to visit public beaches, which "have fewer facilities, but are otherwise indistinguishable from the private ones.”

When it comes to taking in view from atop the Burj Khalifa — aka, the tallest building in the world — Kepnes says to skip the popular sunset time slots, as tickets are about 30 percent more expensive. Another potential money-saver is to pick up The Entertainer, a magazine containing local offers. "You can get a hardcopy at a supermarket or bookstore for 495 AED [about $135] or download the app for 445 AED [about $121]," he explains. "While it’s not cheap, chances are you will get you money’s worth if you plan on doing a lot."

On his Dubai Travel Guide, Kepnes mentions that, "Groupon is very popular in Dubai," so it's easy to find deals at local restaurants. And like many large cities around the world, there's always the option of chowing down at food carts. Plus, "you can find amazing Asian food for next to nothing," says Godt.

One other hack to try is to stick to the local happy hours. "The lifeblood of any drinker, happy hours are where you can go to save a buck," says Kepnes. "Dubai is full of happy hours (and drink specials can be found in The Entertainer too)."