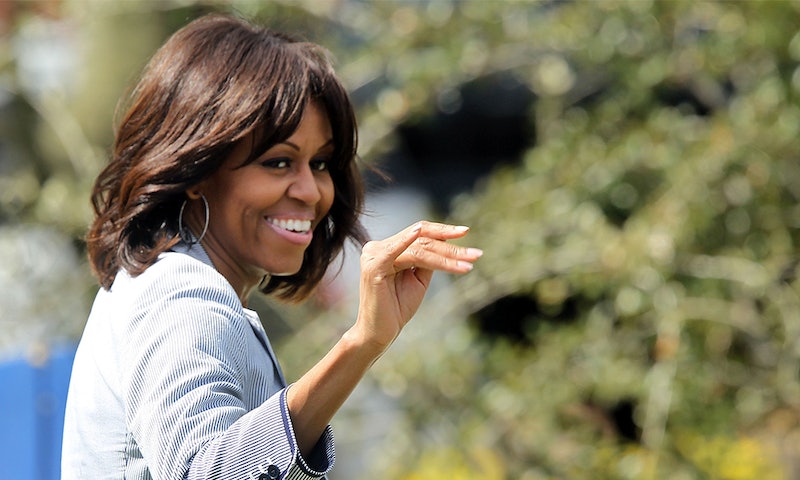 The former first lady is so stylish she's wearing the same denim brand that Gigi and Bella Hadid wear when they're off duty. If you watched The Tonight Show Starring Jimmy Fallon on Tues., you probably swooned over Michelle Obama's high-waisted skinny jeans. It's official: These are the pants your wardrobe needs right this very second.

Fallon got Obama into all kinds of shenanigans on Tues., from dancing in the hallways of 30 Rock to performing magic tricks (in an attempt to surprise unsuspecting visitors on the elevator — it worked). All the while, the always-sleek first lady sported an all-black outfit that you can bet will inspire the rest of your winter looks from here on out.

Obama wore a long, structured blazer with contrast white stitching over a simple black t-shirt tucked into 3x1 jeans. The skinnies were a straight-up throwback to the '90s, in a dark charcoal hue with an acid-wash finish. Made from Italian denim, the high-waisted pants feature laser hem destruction, yielding trendy fray around the cropped ankles.

The luxury denim brand has a celebrity following that extends far beyond just the Hadid sisters, who are known fans. Jessica Alba, Gwyneth Paltrow, Kate Bosworth, and Kerry Washington have all sported 3x1 jeans, too. Even models with the boldest street style, like Kendall Jenner and Alessandra Ambrosio, reach for these pants when they're not on the runway.

Over the years, Obama has coined her classic yet trend-forward style. She rocked a strong dress game when she called the White House home, but now that she and President Obama have stepped out of the spotlight (well, at least slightly), the former FLOTUS isn't afraid to go comfortable in jeans.

She's been known to water the garden in AG Adriano Goldschmied jeggings and wear a pair of classic cropped gray skinnies with her Converse sneakers. She's sported colored denim and destroyed denim, but once told former first daughter Jenna Bush Hager that she draws the line at mom jeans.

"I'm not a mom jeans kind of mom," she said in a 2014 promotional video for her "Let's Move" fitness campaign. Her latest look is certainly an elevated take on the '90s trend, and one that you should get on board with immediately.

Ahead, shop the exact 3x1 jeans Obama loves, along with The Zoe Report's favorite pairs.

Obama's jeans feature a super-high waist and subtle tears at the hem. The faded-black hue is bound to go with anything in your closet.

Check out these statement pants: cropped jeans in the same charcoal wash as Obama's, with destroyed hems and a trendy frayed racing stripe on the leg.

If you're in the market for something more polished, these dark-wash, cropped jeans might be more up your alley.

Similar to Obama's but in a lighter wash, these simple frayed-hem jeans are perfect for your off-duty outfits.

These wine-colored velvet pants are the jeans your winter wardrobe needs.