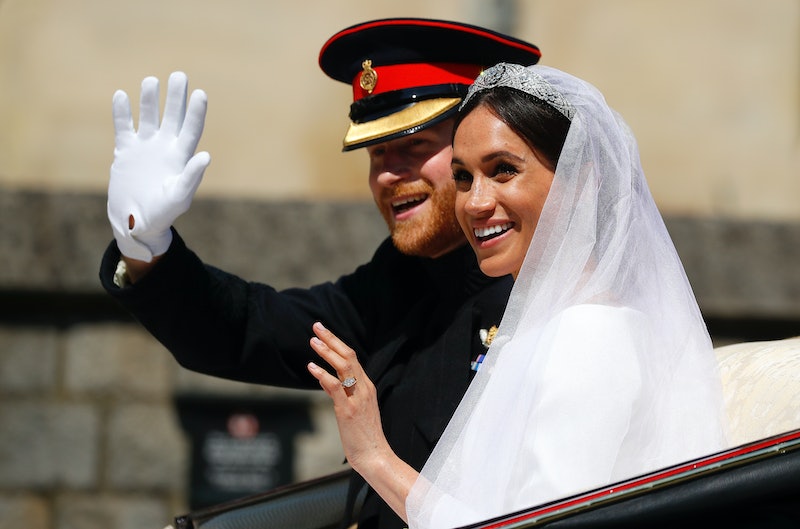 It was the manicure heard 'round the world — pale, pink, and perfectly filed, Meghan Markle's wedding nail polish was one that will forever go down in history. While there's been speculation and guesses over the hue she chose for her nuptials, it wasn’t until this year that it was officially disclosed. So whether you're dying to copy the look for your own vows or just hoping to get the chicest pink mani around, you now have access to the exact color and brand she wore.

Exclusively revealed to Vogue UK, the Duchess of Sussex had her nails done by DryBy London — an institution for Brit beauty lovers. The manicurists used CND Shellac, specifically one coat of Unmasked and two coats of Negligee to top it off. On her toes, she donned two coats of Cashmere Wrap, a slightly taupier champagne color. The shades were the perfect complement to her natural makeup, two sleek white gowns, and two polished updos she selected for the day.

While it was certainly an iconic look, pink undoubtedly remains a popular choice of nail varnish for the royal family for many different occasions — Queen Elizabeth often wears a coat of Essie’s Ballet Slippers after all. Both the Duchess of Cambridge and Princess Eugenie, too, wore a gossamer pale pink lacquer for their ceremonies (theirs being far more translucent than Markle’s opaque shade). This color also made an appearance in Markle's engagement photos and a very milky white version of pink was worn in the first photos with baby Archie.

Since entering the royal life, Markle frequently has these ultra feminine neutrals in rotation, but this hasn’t stopped her from trying out polishes that aren’t as muted. In a stark contrast to nude and pink, she’s also worn black and other darker shades on both her fingernails and toes out to events, making it no surprise that she took a slightly untraditional path for her wedding manicure (at least for a royal) with non-sheer polish.