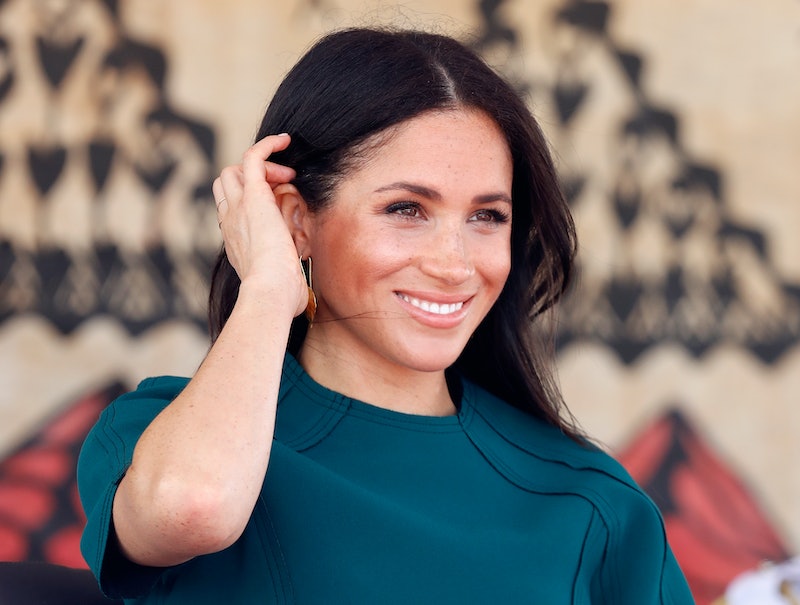 During her surprise appearance at the British Fashion Awards on Mon. evening, the Duchess of Sussex showed up to Royal Albert Hall in London wearing a totally unexpected nail color. It's no secret that barely there hues are a mainstay for royal women — just take a peek at Kate Middleton and Queen Elizabeth's hands as evidence — but Meghan Markle wore jet-black nail polish as she presented the British Womenswear Designer of the Year award.

If you know anything about Markle's royal style, it's that she clearly isn't afraid to break — or bend — royal protocol. The Duchess regularly swaps dresses for suits and pantyhose for bare legs, and she has a knack for infusing her polished looks with of-the-moment trends. But since becoming a royal in May, there's one style rule she's taken rather seriously: Markle rarely (if ever) wears nail polish.

Although Markle has kept her nails neutral throughout her royal tenure, she took a step out of her comfort zone on Mon. evening with, what appears to be, a classic black polish. The hue blended perfectly with her one-shoulder Givenchy gown, offering a chic contrast against her gold jewelry.

Although Mon.'s shade is definitely the darkest the Duchess has experimented with, Markle has played with nail color since joining the family. Although subtle, Markle veered away from super-sheer shades during a visit to London's Nelson Mandela Centenary Exhibit in July. The Duchess made headlines by sporting a soft, rosy hue, which was noticeably darker than the barely there shade she opted for at her wedding, as well as her engagement photos.

Markle's latest shade was perhaps inspired by Mon. evening's event — it was a fashion-focused evening, after all. The Duchess of Sussex was in attendance to present Clare Waight Keller with the British Womenswear Designer of the Year award. Keller, who is the artist director of Givenchy, was the mastermind behind Markle's stunning wedding dress. Markle has continued to look towards Givenchy for formal events since becoming a royal, which made her appearance at the awards all the more special.

While Markle's nail color was certainly a royal risk, it no doubt paid off. The mother-to-be looked as chic as ever, and her jet-black nails served as the perfect finishing touch. We've grown accustomed to seeing Markle in laid-back, super-neutral beauty looks — she's no doubt the queen of no-makeup makeup and perfectly imperfect updos — making her nail polish seem like a true change of pace.

If you, too, are looking to change things up this season, why not pull a Markle and swap your typical holiday hues (think: reds and pinks) for an unexpectedly dark shade? Now that black nail polish is officially Markle-approved, there's no better time to try out a moody color yourself.