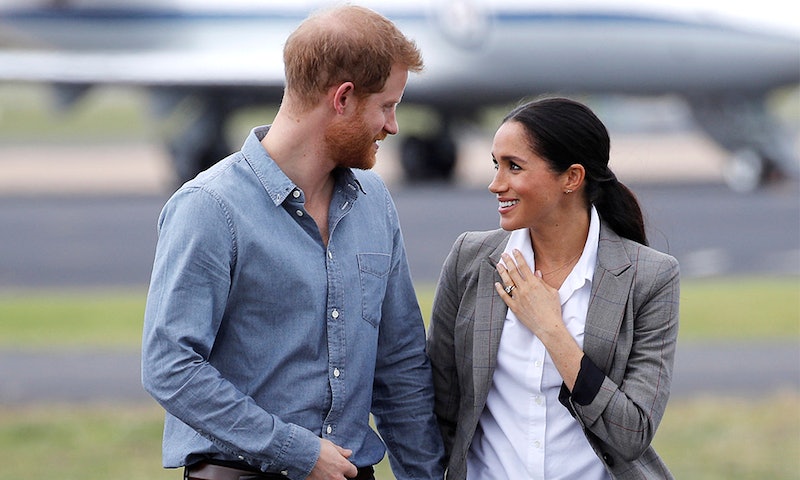 The Duchess of Sussex has debuted a new hairstyle on the second day of her royal tour of Australia. Known for her signature low bun, Meghan Markle's ponytail was a fresh change for fall. The simple updo was a perfect pick for a rainy day — and it's incredibly easy to recreate.

On Wed., Prince Harry and Meghan Markle made their way from Sydney to the more central city of Dubbo, Australia, to speak at the Clontarf Foundation and Girls Academy Dubbo Senior College. Huddling with Harry under an umbrella to hide from the rain, the mom-to-be wore black skinny jeans and a white button-up with an oversized menswear-inspired blazer from Serena Williams' collection and J.Crew booties. The look was typical of Markle's signature style, except for one detail: her ponytail.

The Duchess rarely strays from her signature low bun, and when she does, she typically wears her hair down in loose curls. On the second day of the 16-day tour, however, she sported a super-polished ponytail. Markle parted her hair in the middle (per her usual look), pulling it back into a low pony at the base of her neck. She finished off the look by elegantly twisting her hair around the ponytail. Unlike the wispy, loose bun we've grown accustomed to seeing Markle in, the ponytail was sleek, smooth, and glossy.

It isn't often that Markle sports a ponytail. One of the only times she's made an appearance with this look since her engagement to Harry was at Prince Louis' christening in July, when she wore an olive-green dress and matching brimmed hat. Before then, she would only rarely rock a ponytail on the red carpet during her acting days.

The next time you're looking for the perfect rainy-day hairdo, look towards Markle's royal-approved low pony for a quick fix. Slicked back in the front, the pony will prevent wispy pieces from peeking out in humid or rainy conditions.

Ready to recreate the Duchess' new hairstyle but don't know where to start? Ahead, The Zoe Report's favorite products to make your ponytail last.