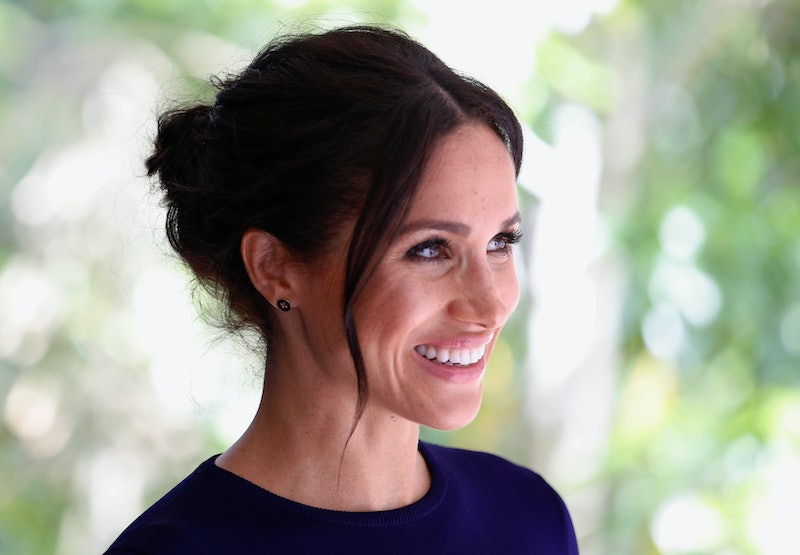 The Duchess of Sussex made a surprise appearance at the British Fashion Awards in London on Mon. evening. More unexpected than her attendance, though, was the gorgeous one-shoulder dress Meghan Markle sported for the occasion. The mother-to-be graced the stage of Royal Albert Hall in one of her most daring looks to date — and you're about to fall in love with it.

Although Markle's schedule is typically chock-full of royal engagements, the Duchess attended the awards for a touching reason: Markle presented Clare Waight Keller, artistic director of Givenchy and mastermind behind the royal's iconic wedding dress, with the British Womenswear Designer of the Year award. It's no secret that Markle frequents Givenchy designs, so it's only fitting that she looked towards the brand for her look on Mon. night.

Markle's one-shoulder Givenchy gown is definitely in the Duchess' wheelhouse when it comes to color — black is a mainstay in her wardrobe — but the unique neckline and single strap is fairy cutting edge for a royal. True to her signature style, Markle paired the gown with the perfect, slicked-back bun, minimal makeup, and a stack of chunky gold bracelets for a sleek contrast.

Meghan, who cradled her baby bump, was all smiles as she presented Keller with the award. "As all of you in this room know, we have a deep connection to what we wear," she said. "Sometimes it's very personal, sometimes it's emotional. But for me, this connection is rooted in really being able to understand that it's about supporting and empowering each other, especially as women.

The Duchess continued, "When we choose to wear a certain designer, we're not just a reflection of their creativity and their vision but we're also an extension of their values of something in the fabric, so to speak, that is much more meaningful."

Keller gave Markle a sweet mention during her acceptance speech, thanking the Duchess for choosing her to design her wedding dress. "I got to know Meghan on such a personal level and to have someone like that trust you in an incredible moment in their life is something that is just the most unbelievable honor," Keller said. "And I can't thank you enough."

It makes sense that Keller and Markle share a special bond, considering the amount of thought (and attention to detail) that went into Markle's bridal look. The custom long-sleeve piece even paid a subtle tribute to Markle and Prince Harry's relationship: a piece of blue fabric from the dress Markle wore on their first date was carefully sewn into the inside of her gown. "It was my something blue," Markle said during a segment on Queen Of The World, a documentary about Queen Elizabeth II.

Mon. evening was certainly a big night for Markle, who in addition to breaking out a daring, one-shoulder dress, bent royal protocol with black nail polish. One thing's for sure, though: Markle has kicked off her maternity style with some seriously stylish outfits, and the awards ceremony was no exception.