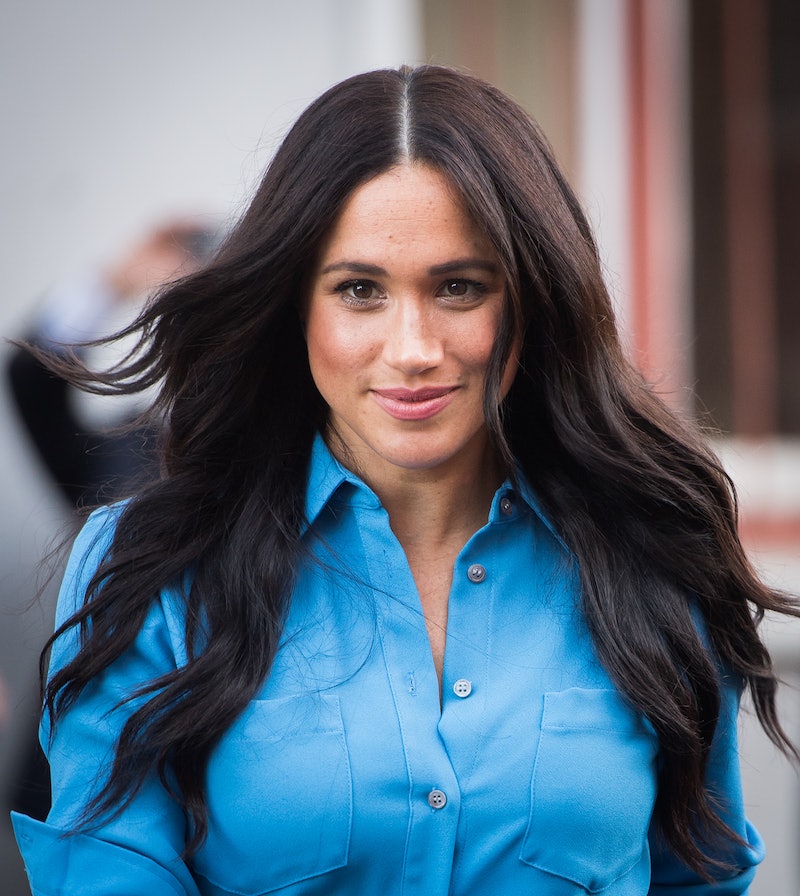 When you're in a rush to do your hair, it doesn't take long to realize that finding a look that's as equally functional and quick as it is stylish, is difficult. There are few hairstyles that can be labeled as such, but there is one guaranteed option — one that Meghan Markle has proved time and time again is a fail-proof solution when you're falling short on ideas. You may have guessed from its frequent appearances that Meghan Markle's low ponytail would be the answer to your hair woes.

Recently, this look dropped by yet again, cementing itself as one of the most reliable hairstyles to date. The debut of the ponytail came during a video call to celebrate the one-year anniversary of the The Smart Set Capsule Collection, a collaboration done between the charity Smart Works' and Markle, that supports their client base of women who are searching for job opportunities.

For this specific occasion, she had it pulled back into her classically low-slung style, but flicked the length of her hair over her left shoulder. Low ponytails like this are an eternally stylish go-to for all purposes, and Markle is one celebrity who consistently relies on the look.

This same sleek 'do was last seen on Markle in March, where she paired it with a stunning azure blue dress. Unsurprisingly, it was instantly marked as an unforgettable moment that will no doubt go down in royal style history.

But her iconic ponytail was only one component of her impeccable ensemble during this particular call. Markle's makeup was superb, too, featuring defined eyebrows and her classic brown smoky eye. She also wore a flush of pink blush and a glossy pinkish nude lip color. For her outfit, she decided on a clean white blazer and rosy brown top, both well-suited for her chat.

During the virtual meeting, Markle spoke with women who were positively impacted by Smart Works, an organization that provides interview clothing and training for unemployed women in underserved communities. They reviewed their stories as well as the importance of the confidence one can get from a look they feel great in — something Markle has certainly mastered.