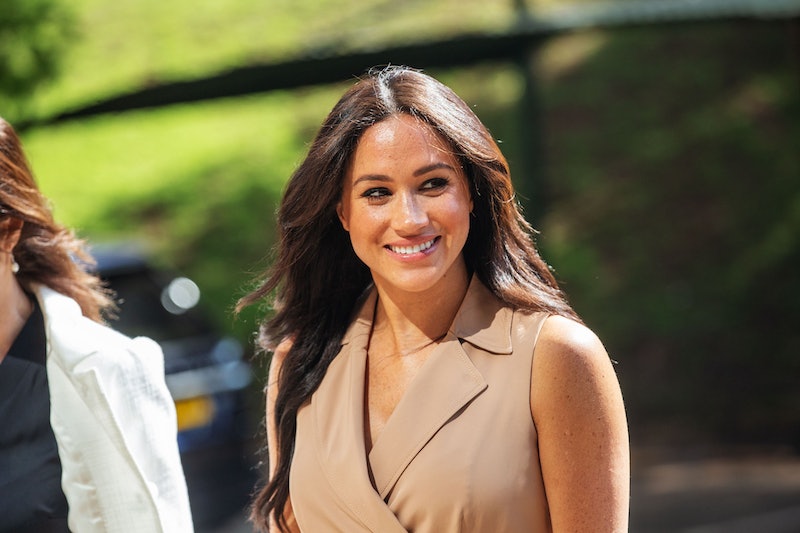 If you've been keeping tabs on the royal family, you've likely become aware of their penchant for all-things forest green. So then, it should come as no surprise that the Duchess of Sussex was just bedecked in the vibrant color, styling it with a key accessory can actually be purloined right now. Architected by Gabrielle Hearst, Meghan Markle's handbag features a demi-satin finish — an iteration of the silhouette that's, unfortunately, totally sold out. There are a few other versions of the wallet bag on the market, all of which provide near-infinite styling options.

Earlier today, Markle made her final royally obliged appearance for Commonwealth Day, where she wore a look that was as polished as ever. Her dress, a bespoke piece from UK-based designer Emilia Wickstead, featured a tea length hem and a side-sweeping cape. Next was her fascinator, which was swaddled in emerald netting and punctuated by a pair of Birks Snowstorm earrings. On her feet, she wore a pair of nude heels from Aquazzura, which provided the perfect tonal separation from the rest of the clover-hued look. All things considered, her pouch was still the star player, its untraditional silhouette adding a contemporary spin to the traditional ensemble.

Style set members the world over have been toting tiny bags of all shapes and textures for the past few seasons, with Gabriela Hearst purses dominating much of the real estate. The likes of Kate Bosworth, Priyanka Chopra, and Oprah Winfrey have been seen with the exact same silhouette for occasions high (the royal wedding) and low (running errands in New York).

The purse's versatility has caught the attention of many, and its well-intentioned approach rakes in extra brownie points — to protect its wearers, several pieces use a special silver fabric that blocks radiation from mobile devices from reaching women's reproductive organs. The brand is also 100% plastic free, utilizing compostable packaging and recyclable cardboard hangers to eliminate the material.

To shop the forever piece, shop similar styles in other textures, ahead. And be sure to keep eyes on Markle — while her royal presence may be shifting, style-mongers are projecting that she'll still be as on-trend as ever.