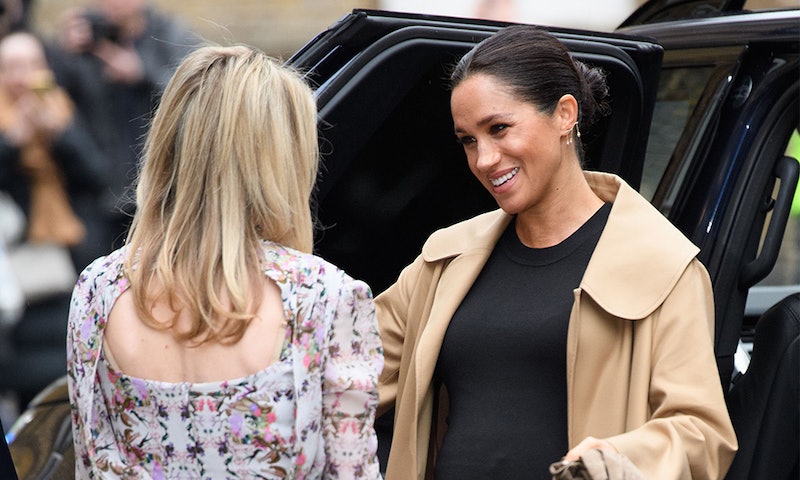 The Duchess has been hiding away for weeks, looking after that budding baby bump. Thankfully, her surprise outing in London will put an end to your withdrawals. Meghan Markle's cow-print heels are the fashion fix you need to hold you over until her next look.

On Thurs., the royal made an unexpected visit to one of her four just-announced patronages, Smart Works, a London agency that helps unemployed women regain skills. She stepped out of the back of a town car in the most perfect LBD — a short-sleeved midi by the maternity brand Hatch — and a beige Oscar de la Renta trench coat.

The most stylish part of her outfit, though, was her animal-print heels. Fan site Meghan's Mirror identified the shoes by a photo the Duchess posted long ago. They're reportedly an older version of Gianvito Rossi's "Plexi" heels in a very unexpected cow print with trend-forward PVC on the sides.

The bold shoes made the royal's outfit pop. Pairing together two solid neutral colors could be a bore, but Markle's outfit shows that all you need is a little bit of animal print to jazz it up. She completed the look with suede gloves, a square black handbag, and dangly earrings by Kimai.

The visit was a total surprise, even to the folks at Smart Works, who were only notified early Thurs. morning that the royal was on her way. Markle's unexpected appearance came immediately after Kensington Palace revealed that she had chosen not one, but four patronages.

They are "issues with which she has long been associated including the arts, access to education, and support for women and animal welfare," the press release said.

In addition to Smart Works, her other patronages are the Association of Commonwealth Universities, an animal organization called Mayhew, and The National Theatre.

Her shoes are, unfortunately, not on the market anymore, but there are other elevated animal-print heels out there to help take your LBD to the next level — Markle style. The Zoe Report has rounded up a few favorites, ahead.

If you're partial to a mule, opt for these neutral black-and-white leopard-print heels instead.

A pair of bold snake-print heels is a must-have for your shoe collection.

Play on the trendy mix of animal print and PVC with these Markle-inspired leopard-print heels.

Bet you can't find an outfit that doesn't pair with zebra print. These statement heels feature the cutest suede ankle ties, too.