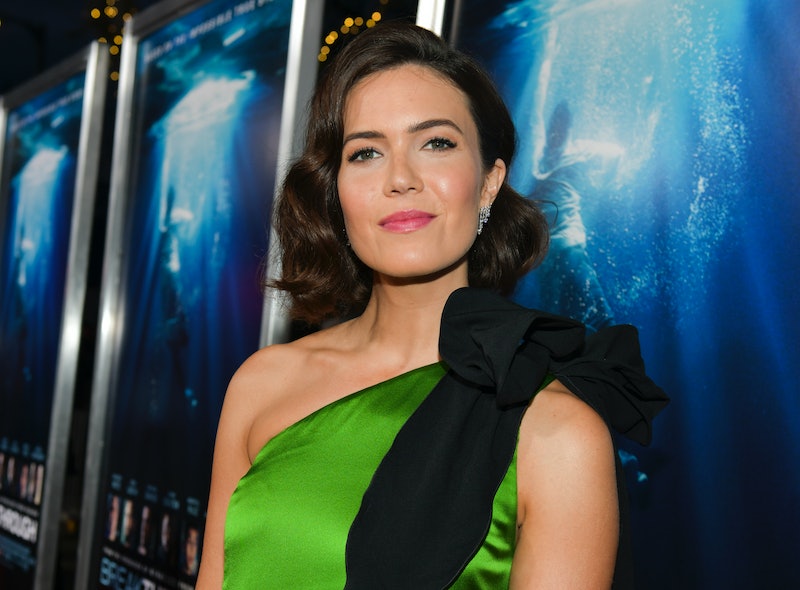 It was such a subtle change, you probably missed it, but Mandy Moore's new hair color — which made its debut on Tues. during the NBC and Universal EMMY Nominee celebration — is destined to be the next big hue for fall 2019. And since it's never too early to start prepping your wardrobe for the new season, it's also time to think hard about your cold-weather beauty looks. Think: lots of warm, neutral smoky makeup moments and an "Autumn Glow" dye job to boot.

Moore hasn't had any major switch-ups done to her hair in quite a while, but that all changed on Tues. It may not have been a drastic transformation — subtly has been the go-to among the celeb set, including Lea Michele, who also had a slight color adjustment done at the beginning of Aug. — but it's so stunning, every brunette will be running to the salon to recreate the This Is Us actor's gorgeous new hue.

As is often the case with celebrity transformations, Moore debuted the dye job on the red carpet. On Tues., the actor attended the NBC and Universal EMMY Nominee celebration, held in West Hollywood, and everything about her evening attire screamed fall perfection, from her gorgeous Proenza Schouler gown with black, brown, and white detailing to her fresh, slightly-warmer hair color that was courtesy of Hollywood's favorite beauty pro, Nikki Lee.

"As it's mid-August, it's not too early to think about fall color trends," Lee shared in a press release. "This 'Autumn Glow' is a wonderful new brunette color for Mandy. It's rich and warm with flickers of golden light!" she added, before calling out an affordable drugstore product to maintain the color.

"To prevent your 'Autumn Glow' from going brassy, try Garnier’s anti-brass treatment. It will keep your color beautiful and treat your hair at the same time," Lee explained.

With a new season just around the corner, there's no better time than now to get that transformation you've been dreaming about. Want something drastic? Consider getting this year's most popular cut: a bob.

Prefer something a bit more understated? Well then, brunettes, you might want to request Moore's "Autumn Glow." And once you do, scoop up the product Lee recommends to keep brassiness at bay, below.

This anti-brass treatment is infused with avocado, olive, shea oils, and +CoolTone Technology to keep your color looking fresh for as long as possible.