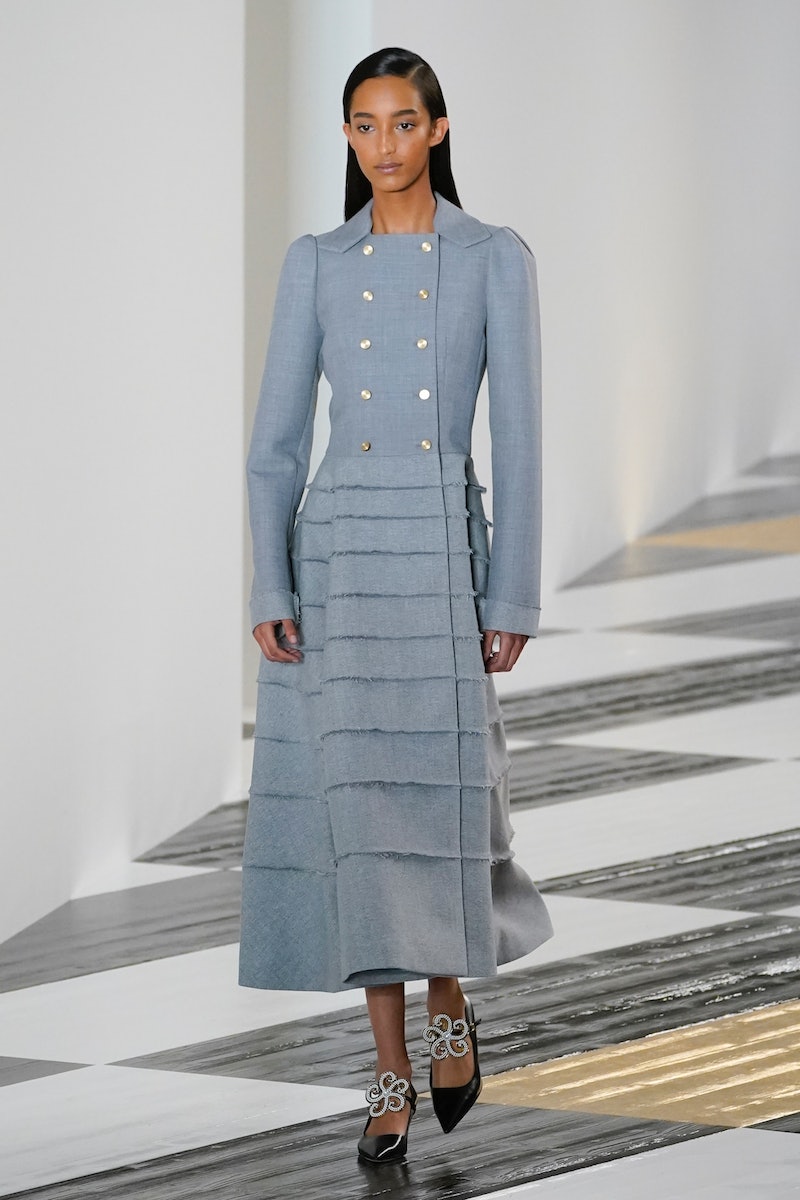 Jonathan Anderson has carved a space for himself in the fashion world that is all his own. His work on both his eponymous label JW Anderson (which presented in London), and as creative director at Loewe always manages to turn trends on their head and to embrace the unexpected. For Loewe's Fall/Winter 2020 runway collection, Anderson embraced his signature quirky-cool aesthetic with the intention of embracing playfulness and fun, not taking fashion too seriously. The result was a show that while elegant, had a whimsical air — a lively wake-up on a crisp Friday morning in Paris.

There were nods to some of the biggest trends from other runways this season: feather headpieces, metallic fabrics, oversized sleeves, capes, and relaxed suiting. But, for Anderson, his interpretations always go one step beyond the rest — on trend, but never overtly trendy. Pants aren't just slouchy, they're balloon-like, and a caped coat includes gathered shoulders, indicating exactly where the arm would be. The sense of whimsy is never lost throughout the show. Beyond the brand using words like "optimism" and "excitement" to explain the collection via Twitter, it's clear in every piece that Anderson makes beautiful clothing that is actually fun — both to wear and to look at.

Though Loewe is a Spanish brand, there were clear threads to the past work of French couturiers of the early 20th century in the fall collection. The masterfully draped and pulled gowns and corseting remade a past glamour into a modern and entirely wearable creation. Silky double-layered dresses and ones with bright metallic-printed puff-sleeves were paired with black square-toe loafers with the brand's swooping "L" logo sparkling on top.

Anderson also looked outside of traditional fabrication methods, collaborating with artist Takuro Kuwata, who received special mention at 2018's Loewe Craft Prize. Kuwata created ceramic pieces affixed to the front of dresses, and attached to the drawstring pulls of the brand's signature Flamenco clutches. Loewe also tapped 92-year-old artist Zilia Sánchez, whose abstract painting hung in the space. This marriage of artistry and fashion is something that Anderson has successfully pursued in his time at the brand. Last season, he focused on crafts of the 16th and 17th centuries, bringing lacework and embroidery into the collection, while embracing the aesthetics of Spanish royalty.

But beyond imagination and artistry, the success of a modern brand hinges on its ability to actually sell the clothes (and accessories) it sends down the runway. In this case, the crisp coats, swingy dresses, oversized bags, and both the embellished pumps and simple sneakers worn afoot are all items begging to be worn, not just by the brand's signature customer but by those who are looking for ways to re-infuse their wardrobe with energy and fun. The collection is regal, to be sure, but it's also democratic.