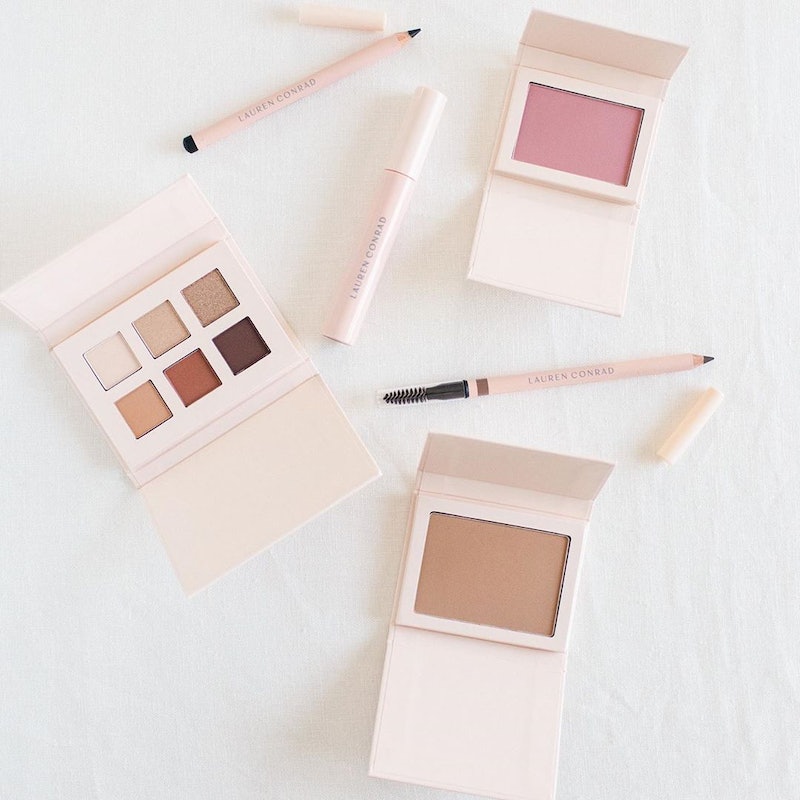 In August, Lauren Conrad dropped an eponymous makeup brand entirely out of the blue. The Laguna Beach legend-turned-fashion designer announced the surprise launch with a five-piece core collection at the ready, and before two months could pass, she doubled her offering. The September expansion debuted a handful of everyday must-haves — blush, mascara, etc. — but the new eyeshadow palettes are a Lauren Conrad Beauty breakthrough.

The pioneer of romantic, ethereal aesthetics has achieved in weeks what many can't in years: a comprehensive makeup range covering all the bases, from lips to cheeks to brows. After reportedly being a longtime beauty admirer, Conrad whipped up a collection of her own (unbeknownst to everyone), which was announced and unveiled in one swift go.

The inaugural lineup included four shades of lipstick, three shades of lip gloss, a lip and cheek tint, liquid eyeliner, and a liquid highlighter, comprising the designer's daily essentials. Then, only about a month after the initial brand launch, it acquired a powder blush, eyeliner pencil, eyebrow pencil, mascara, and two eyeshadow palettes, too.

The five new additions round out the basic collection, promptly turning Lauren Conrad Beauty into a convenient one-stop shop of minimalistic makeup routines.

The highlight of Lauren Conrad Beauty's second launch, however, is perhaps the two eyeshadow palettes. The Sunrise palette is a blend of soft neutrals with a pop of terracotta and chocolate whereas the Magic Hour iteration is a combination of rich browns and pink. Both six-pan palettes feature satin, matte, and shimmer finishes for subtle smoke or dramatic sparkle.

Like the rest of the line, nothing exceeds $30. Lauren Conrad Beauty is entirely vegan, eco-conscious, paraben-free, PETA-approved, and gloriously uncomplicated, despite all its classifications. Shop the palettes and fellow fall additions, ahead.