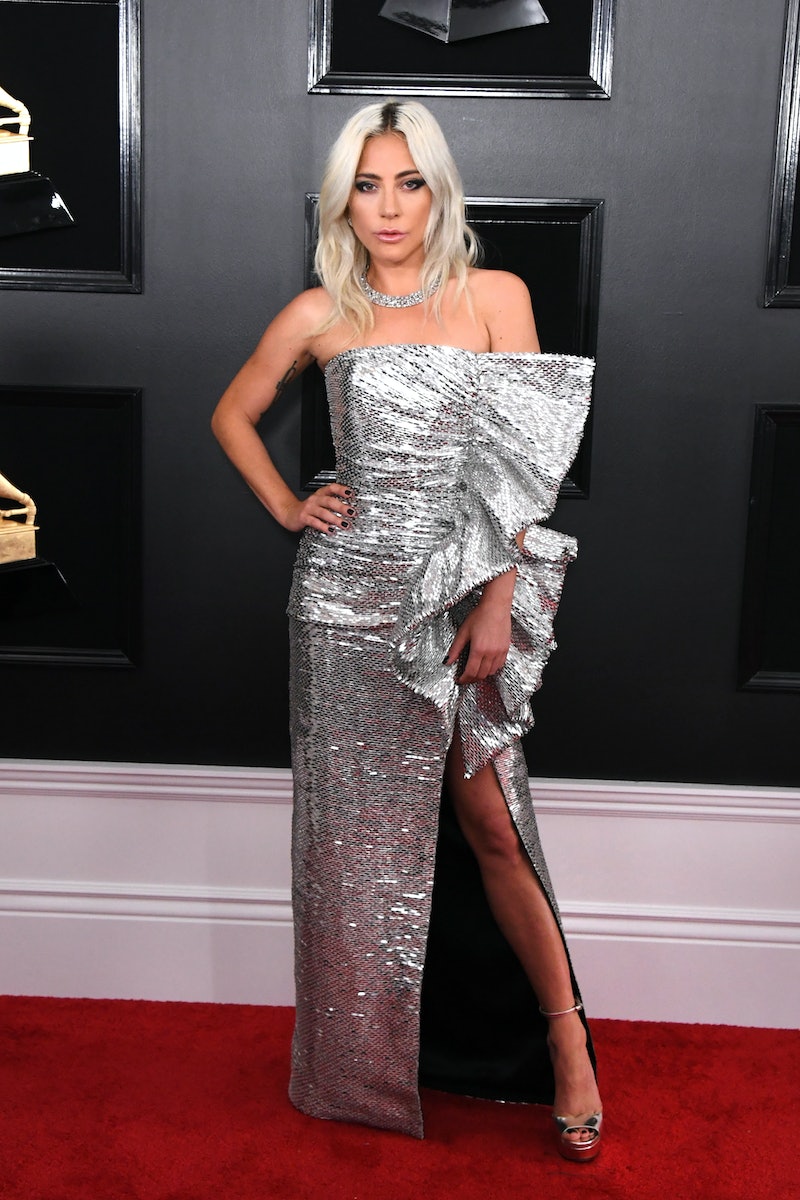 Red carpets are always the perfect place to display high-fashion runway looks in unique ways, and this year's Grammy Awards was no exception. Case in point: Lady Gaga's 2019 Grammy dress, which was straight from Celine's Spring 2019 runway — but looked noticeably different this time around. Yes, the singer's strapless gown was altered for an entirely new look.

Gaga's dress originally debuted as a mini on Celine's Spring 2019 ready-to-wear runway, not to mention it was paired with combat boots. For her rockstar take, Gaga went long with the look and wore it with silver platform heels and soft, undone waves. Also noteworthy was the 100 carats of Tiffany's diamonds that decorated her neck.

The dress itself is part of an especially dynamic collection from Celine, inspired by the sparkly, pouf-sleeved silhouettes of the '80s. The lineup also marked the debut of Hedi Slimane's reign in the French design house. This aesthetic felt decidedly Gaga, so it's no wonder she went for this particular style for Grammys night.

With award season in full swing, Gaga has already made quite a few headlines for her memorable outfit choices. At last month's Golden Globes, she appeared in a Cinderella-style Valentino gown from the brand's Fall 2018 runway, which she paired with teal-blue hair color. The dress was dramatic to say the least, featuring puffed, off-the-shoulder sleeves and an incredibly long train.

At this point, Gaga is known for her head-turning designer gowns and looks at the Grammy Awards. She's always the one to look out for — and with good reason. Last year, the singer wore a stunning tulle Giambattista Valli gown for her acclaimed on-stage performance and Armani Privé for the red carpet. In 2016, the singer famously channeled David Bowie in a colorful Marc Jacobs gown.

As for this year's event, Gaga already had even more of a buzz than usual, thanks to her success both acting in and writing music for A Star Is Born. And it wasn't just her fashion choice that ended up winning big. Before the show even started, she pulled in wins for both Best Pop Solo Performance and Song Written for Visual Media.

Once inside the Staple Center, Gaga quickly grabbed the first award of the night, Best Pop Duo/Group Performance, which she earned for "Shallows," her Oscar-nominated duet with Bradley Cooper. The artist also treated viewers to a gorgeous rendition of her winning song, alongside collaborators Mark Ronson, Andrew Wyatt, and Anthony Rossomando, which she performed while wearing a crystal-encrusted catsuit.

Whether it's due to her memorable red carpet looks, or her award-winning music, Gaga is certainly no stranger to making an impact at awards shows — Grammys included. Ahead, The Zoe Report rounded up the singer's most show-stopping ensembles from Grammy's past.

At The 2019 Grammy Awards In Celine

At The 2018 Grammys In Gaimbattista Valli

At The 2018 Grammys In Armani Privé

At the 2016 Grammys In Marc Jacobs

At The 2015 Grammys In Brandon Maxwell