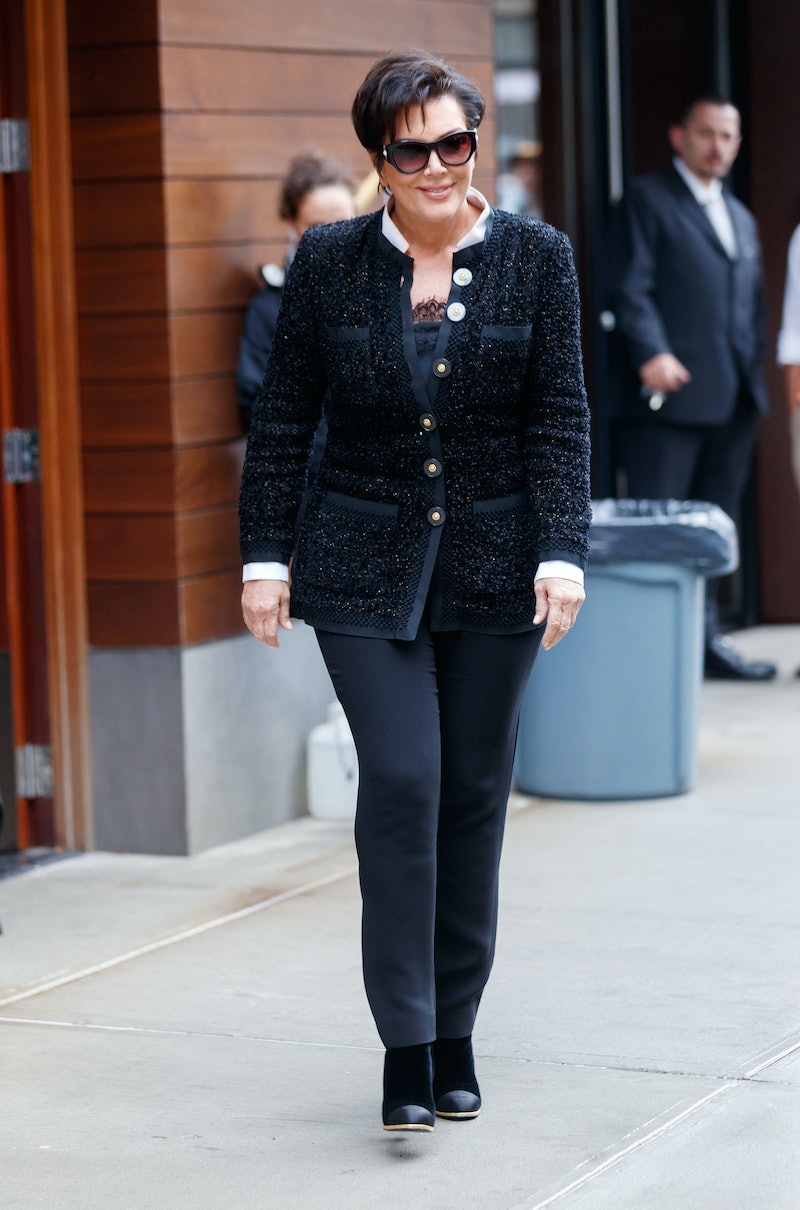 You know what they say: The devil works hard, but Kris Jenner works harder. And while the 63-year-old mogul is expertly managing her tribe, Kris Jenner's street style stays on point. Jenner might be one of the busiest people on the planet, but her smart, chic sensibilities are never neglected, making the mother-of-six a style icon in her own right.

When you have an empire to run, it's important to dress the part, and Jenner's style shows she means business. Executives like Steve Jobs and Mark Zuckerberg have been known to stick to a uniform of sorts, reaching for the same staples daily — and Jenner is no different. While she doesn't swear by turtlenecks and New Balance sneakers, Jenner she knows what works for her, and she sticks to it.

Blazers, sleek pants, and loafers remain in constant rotation in Jenner's closet, and she's remained loyal to her signature pixie cut over the years (aside from a rare departure to a blunt bob in March). By consistently delivering a polished, refined, and fashion-forward aesthetic, Jenner's style serves as a great source of workwear inspiration.

If you're looking to command attention while putting your most stylish foot forward, adopt a few of Kris's go-to items into your closet. The Zoe Report rounded up a handful of picks that fall in line with the Jenner's style sensibilities, so all you have to do is add to cart and proceed with world domination.

It's actually a rarity to see Kris Jenner not wearing her signature blazer. The infinitely versatile staple is timeless and will never go out of style, so snag one of the options below to add to your collection.

Whether you work in an office or not, no wardrobe is complete without a good blazer, and this oversized style from Acne is an excellent choice.

This sequined blazer is sprinkled with luxury, which feels like something the head of the Kar-Jenner clan would totally go for.

Switch things up and opt for this creamy satin style that feels a little bit retro but still so now.

Put simply, Kris Jenner wears the pants, and they're generally of the black, fitted variation. Working as a foundational staple you can build around, basic black bottoms of different finishes can be dressed up or down and will make getting out the door a little bit breezier.

Get you a trouser that can do both, like these straight-leg joggers that will work with sneakers or pumps.

These distressed black skinnies will offset a buttoned-up look by adding a touch of edge.

Spring is officially here, which means it's about time to bring on the dresses. Jenner loves a good shift dress and usually sticks to simple, full-coverage styles. Aside from the occasional floral or leopard-print moment, her dress picks usually fall in line with the rest of her aesthetic: classic but cool.

Though this style is pretty simple, the puffed sleeves and cuffs are a smart finishing touch.

Pair this style with over-the-knee or Chelsea boots to step out of your ordinary workweek color scheme.

Nothing says business like a crisp white blouse, and this shirtdress is so unique (and 100 percent Jenner-approved).

Despite keeping her style classic and orderly, Kris Jenner is the queen of extra when the occasion calls. Often reaching for patent leather finishes, vibrant hues, or even the occasional fur, Jenner amps things up in the outerwear department. Consider some of the slightly toned down (but still statement-worthy) options, below.

If you haven't snagged your own Saks Potts number, take the plunge with this classic, all-black style that will still make a statement.

Kris and daughter Kim are both big fans of a Max Mara moment. Jenner has reached for this exact teddy bear style on numerous occasions.