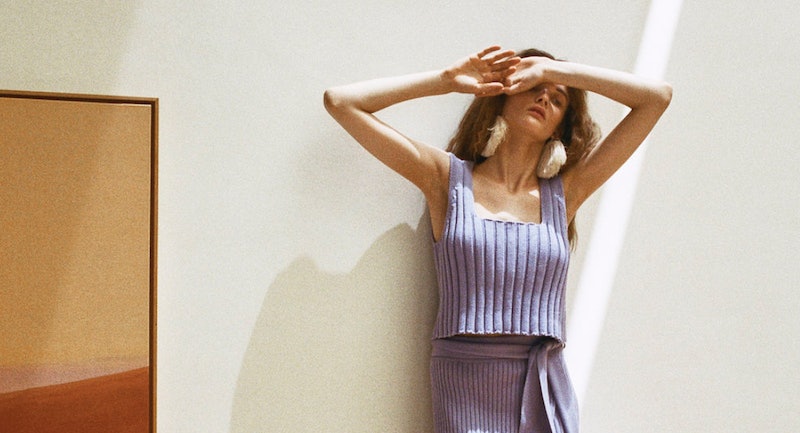 My Instagram saved folder is always a really good indicator of what I'm obsessed with at the moment. And since it's a culmination of things I've been adding for months, it's also often the place I look for trends that are unknowingly budding right under my nose. This season, it happens to be knitwear for summer. And now that I've realized that, I can't get enough.

It's not that lightweight knits are anything new — it's just that in 2019, they've taken on an Insta-worthy nature that's becoming increasingly hard to resist. And I'm not the only one who's obsessed. I've seen multiple editors post about buying Aritzia's perfect knit tank tops in a variety of colors (can you blame them?) and brand-new knitwear label YanYan popping up on my feed constantly starting mere days after it launched.

At this point, I've fully bought into the trend. There's not a linen or cotton fabric to be found in my saved folder anymore — it's all crochet crop tops and funky ribbed pants, and probably will be for the foreseeable future.

IMHO, it's actually superior to typical summer fabrics. Summer knitwear reimagines your favorite fall staple in the form of a drape-y, vacation-ready piece. It hangs beautifully, sometimes allowing for a little breeze, and looks unexpected thanks to its inherent juxtaposition.

Most importantly, it's easy to style. If there's one word that describes knitwear, it's "effortless," which means that you can throw on any piece with anything and the outfit will look like it was meant to be. A knit skirt? Add a t-shirt and sandals. A sweater tank? Throw it on with Bermuda shorts and sneakers. Essentially, you can rely on it for a foolproof way to put together an outfit that'll make your friends jealous without trying.

Which explains why I'm obsessed — and why you're probably about to be, too. Ahead, check out 10 of the pieces that have flooded my Instagram saved folder as of late.

I can't scroll through Instagram these days without a piece from Fiorella Pratto popping up, and it's easy to see why. The brand takes classic pieces like knit skirts and tanks and gives them unexpected proportions and colors, and does it all with beautiful fabrics like the supima cashmere this skirt is made from.

This Insta-famous brand is no stranger to summer knits — it's a staple in its lineup of slinky, summery styles. And it knows what it's doing: Every piece the label makes nails the perfectly draped, effortless appeal of warm-weather knitwear, including this simple-but-chic set.

Sometimes, you just want to stick with the classics, and this pretty cardigan makes it easy. Tie it around your shoulders on cooler summer days or to prepare yourself for the inevitable office chill.

Skip the typical Bermuda shorts this year and opt for this 100 percent cashmere pair instead. It's an unexpected take on a timeless piece that'll turn even the most basic outfits into a chic, put-together look.

A loose, shapeless dress is a must-have in any summer wardrobe for those days you need to throw something on and go. Plus, you can wear it straight into fall by swapping your sandals for a pair of knee-high boots.

YanYan quickly became an editor fave when it launched in March 2019 because it managed to bring some fun back into knitwear. Among its offerings are knitted fluorescent yellow bike shorts and these slightly less wild pants that are currently at the top of my wishlist.

Here to blur the lines between activewear and everyday clothing even further is Live The Process. While it may not be the *best* tank for sweatier workouts, it does look really cute paired with leggings or biker shorts on those days you just want to lounge.

Rodebjer took knits to another level with this skirt, adding one of this season's must-have details: fringe. And unsurprisingly, it's already got the influencer stamp of approval. Pair it with its matching shirt for a head-to-toe knit look, or wear it with a simple tank top to keep things cool and minimal.

Leave it to Khaite to put a totally new spin on a piece you wear every day. You could wear this piece under another knit if you want to go all out, or throw a sheer blouse over top for a pop of color and texture. Or honestly, just wear it on its own with a high-waisted midi skirt. The options are endless, because this will look good with everything.

She Made Me
Maalai Midi Dress
$495

The pieces from this Byron Bay-based brand are crocheted by hand by local artisans in Bali. This particular dress took more than two weeks to make, and only six were produced — and the result is a dress that'll make you want summer to last forever.