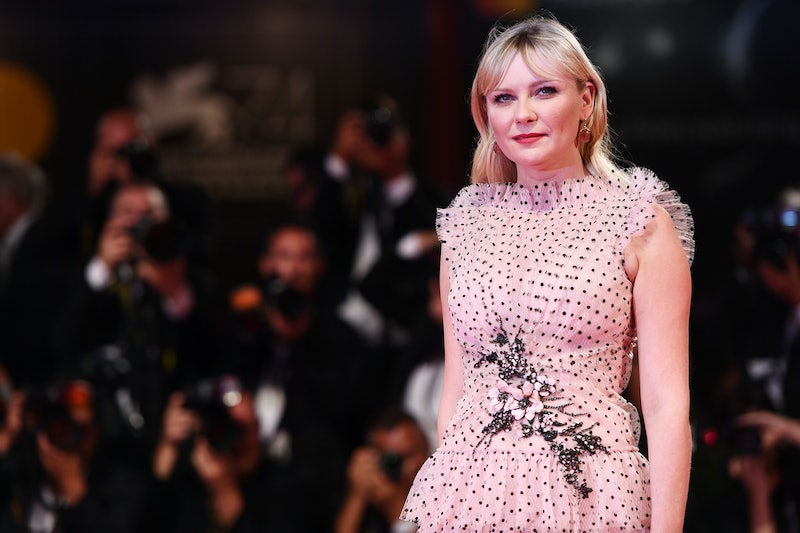 This Bring It On icon looked like a modern-day Brigitte Bardot on Thurs. night's Late Show. It wasn't just on account of that drop-waist LBD, either. A half-up hairstyle with curtain bangs gave Kirsten Dunst a retro look worth copying immediately.

You're about to get your much-needed dose of Dunst on Showtime's new series, On Becoming a God in Central Florida, which is slated to premiere later in the month. In the show, she plays a behind-the-times mom from the '90s, an aesthetic that has seemed to slither into her real-life style as well.

One couldn't help but think of how adorably retro her hairstyle was as she chatted with Stephen Colbert on the Late Show sofa. Her long, blonde bangs were parted in the middle and swept to either side, curtain-style. The top half was pulled back loosely and secured with a chunky black bow.

The rest of it cascaded down her chic puffy sleeves in sleek waves. Dunst wore a glamorous black party dress from Khaite's Pre-Fall collection that turned into polka dot-adorned tulle just above the knee. A bold red lip courtesy of makeup artist Mary Wiles gave the dress the perfect pop of color, just what it needed.

Owen Gould, whose client roster also includes Sienna Miller and Emily Ratajkowski, was responsible for the precious throwback look. He posted a photo of Dunst on Instagram, captioning it, "wrapping up this week with a bow."

The accessory in question seems to be from Anthropologie's Hadley Bow Barrette Set, which comes with an identical one in off-white. The combination of the feminine ribbon and the way Gould styled her face-framing bangs in that nostalgic way made for possibly one of her best hair moments to date.

Dunst's look is going to become a hairstyle mainstay, especially for all the girls enduring the notoriously torturous process of growing out bangs. Let the actor's hairstyle be your savior. How to recreate it, ahead.

For some, all that's needed for these undone waves is a misting of this miracle spray. It's loaded with rice protein to give your hair texture without weighing it down.

Others might need a little extra help from this wave-creating wand. Consider it your new best friend.

Next up: bangs. Copy Dunst's super-'70s look by parting your fringe down the middle and sweeping to the side, holding it tight with this 48-hour hold spray.

Lastly, secure your half-up hairstyle with one of these cute bow barrettes.