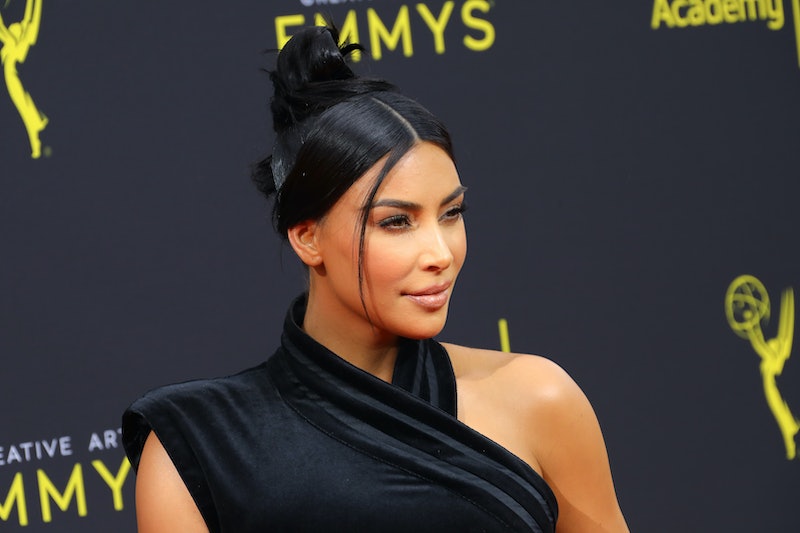 If you've been keeping up with the red-carpet fashion from this year's awards season, you've likely noticed that citrus colors are trending — with tangerine, lime, and lemon hues popping up on A-listers ceremony after ceremony. And now, Kim Kardashian's yellow outfit proves that the sunny shade is poised to be just as big for street-style, too. The entrepreneur took a break from neutrals and sported a vibrant look that just so happened to include a pair of viral Bottega Veneta sandals, too.

For an appearance on Good Morning America on Feb. 5 in New York City, Kardashian went for a full yellow-on-yellow ensemble. Styling a light-yellow, fitted high-neck top with a body-hugging, citrusy-yellow skirt, the look just further proves that the color is a lot more versatile than you think. The mogul and mom-of-four completed her head-turning outfit with a set of the uber-popular, square-toe thong Bottega Veneta Stretch Sandals in metallic gold.

Keeping the rest of her look simple, Kardashian skipped adding any other accessories to the bold ensemble. And when it came to glam, she styled her long locks down with a natural wave and opted for her signature bronzed and glowing makeup look. The SKIMS founder top it off with a light pink glossy lip color and nude polish on her nails.

As previously mention, shades of yellow have been popping up all over the red carpet lately; with Queen & Slim star Jodie Turner-Smith recently donning a yellow Gucci gown at the BAFTAs and Awkwafina wearing the shade to the Critics' Choice Awards. On top of that, who can forget Zoey Deutch's Golden Globes yellow Fendi jumpsuit that earned her a spot on best dressed lists.

The Spring/Summer 2020 runways also saw their fair share of yellow. Brands like Akris, Balmain, Sies Marjan, Lacoste, and more all offered up pieces in the eye-catching color. So, it was really only a matter of time before the shade began trending on the street-style scene — and leave it to Kardashian to kick it off.

Now ready to bring this striking color into your wardrobe? Get ahead of the trend, and start scoop up pieces below that'll allow you to recreate a look similar to KKW's.