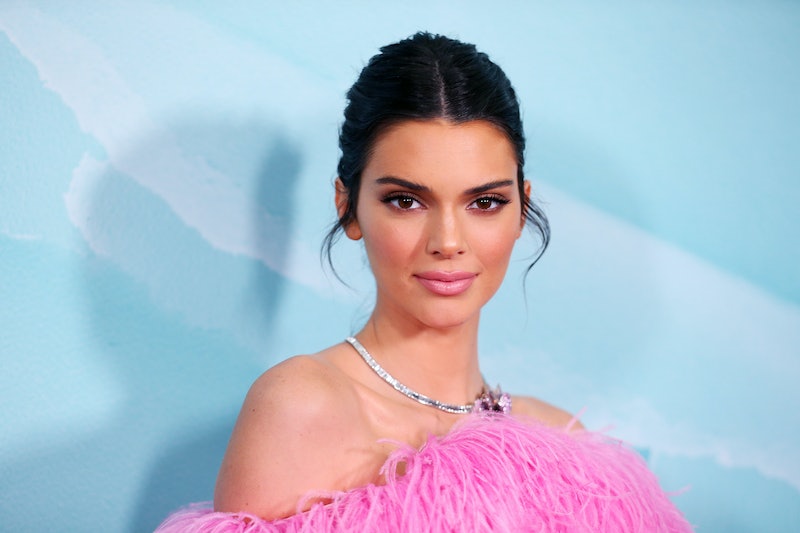 Bold colors have been the stars of all the most noteworthy hair and beauty looks of 2020. While it seems that's not changing anytime soon, celebrities are starting to use those hues in a different way — rather than making bright shades the focus, they're being used to breathe new life into timeless beauty looks. Stars have freshened basic hair shades with blue, created cat-eyes out of lavender eyeliner, or in the case of the Jenners, revamped the shape and color of of a classic nail style. Kendall Jenner's blue French manicure is the most recent look that serves as a modern transformation of a classic, but even cuter is the fact that hers is the colorful matching version to her younger sister's mani.

On Aug. 23, Modern Pamper Salon shared two images on its Instagram Stories of the chic nail work the Jenner sisters had done. Both sets of nails were undoubtedly French manicures, but not the usual rounded or almond tips with the expected pink and white. The tips were squared off, which made for a unique contrast against the rounded inner line, and both had transparent base coats, but went for different colors on the tips.

Jenner chose a bright sky blue, and because it only appeared at the ends of her nails, it felt more minimalist rather than a bold splashy manicure. Kylie on the other hand opted for white, which makes sense seeing that she already experimented with a matte rainbow French manicure back in April.

But it's not just the Jenners who are getting creative with colorful manicures — it seems like many stars are trying to pile on as much color as possible before fall catches up. Fellow model Hailey Bieber had daisy decals drawn onto her nails and more recently, oranges, at the same salon as the sisters. Also playing with color was Vanessa Hudgens, who recently rocked a set of half-and-half neon orange nails.

If you're looking to twist a classic, or simply find a matching manicure for you and your BFF, you can shop colors similar to the Jenners', below.