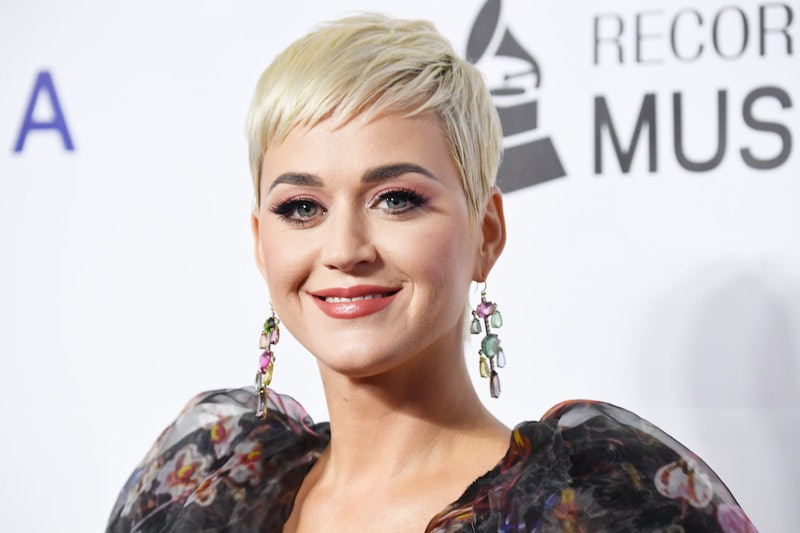 Miley Cyrus, Bella Hadid, and nearly every member of the Kardashian-Jenner clan will forever go down in history as the great hair chameleons of our generation, but none have risen to the merit of Katy Perry. The American Idol judge has test run every style, cut, and shade in the book, from hot-pink waves to a purple pixie. Her latest change, however, is a little more, shall we say, street-ready. The long, blonde "goddess" hair Katy Perry just debuted is a look you might even feel inclined to recreate.

This girl has had more hairstyles than Serena Williams has Grand Slam titles. Lately, the people have gotten pretty used to seeing her with that now-signature platinum bob (following the famous bleached pixie), which means it must be time to change it up. On Saturday, the singer introduced the most voluminous below-the-shoulder waves that could very well be (nay, are almost definitely) a wig.

Perry has put her hair in the hands of Chris Appleton and Ricky Henry in the past, but the guy behind this one is Jesus Guerrero — the same guy who constantly puts Kylie Jenner in wigs. He's also responsible for many of Chrissy Teigen and Shay Mitchell's major transformations. Perry marked "Hater's Headquarters" as the location on her Instagram post, referring to the many who have been so open about their distaste for her pixie cut.

"If you don't love me at my pixie cut then you don't deserve me at my Goddess glow," the singer captioned her photo. Her sandy-blonde waves take up most of the frame, but what little you can see of Perry's face is adorned with the most ethereal makeup (courtesy of Michael Anthony).

Knowing this hair chameleon, it's only a matter of time before she returns to her beloved pixie, just as she so promptly did in April, when she last surprised everyone with a dreamy wig moment. At the very least, you'll likely catch her on the next American Idol sporting her new usual: a bleached, above-the-shoulder bob.

Until then, go ahead and flag her new waves for your summertime inspiration because this bombshell look and the beach would get along just great.