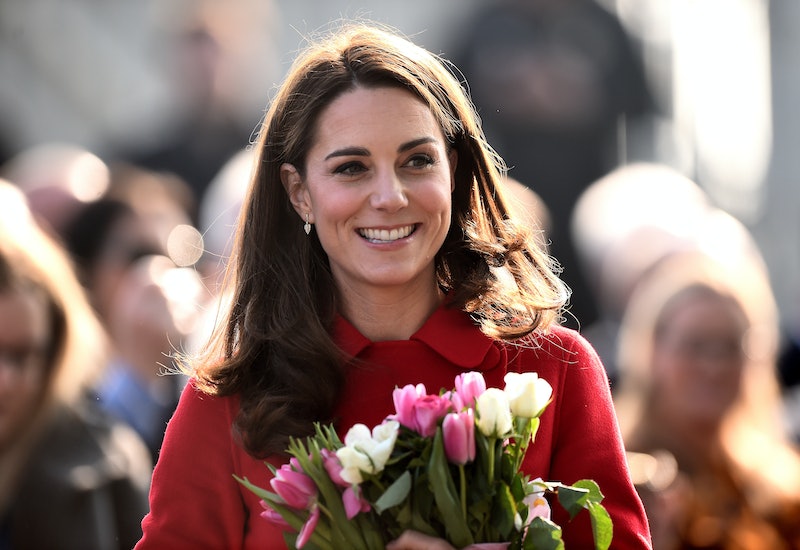 Kensington Palace must be pretty empty with both duchesses away — one in Morocco and the other in Northern Ireland. While Prince Harry and Meghan Markle were enjoying the warmth of sunny Africa, Kate Middleton headed north to surprise the Irish, and it certainly isn't bathing suit weather up there. Once again, Kate Middleton's red coat dress kept her warm.

Middleton arrived in Belfast alongside Prince William on Weds. for an unexpected two-day trip to "celebrate the young people of Northern Ireland," a press release from Kensington Palace said. Their first stop was Windsor Park Stadium, home of the Irish Football Association, where the couple learned about how its outreach programs benefit local communities.

Middleton met the crowd in the trusty layer she's relied on for years: an adorable red coat dress by Carolina Herrera. The double-breasted coat features a polished collar and an A-line fit typical of the duchess' timeless style.

The royal first debuted the statement piece in 2016, during her and Prince William's tour of Canada. Then, she wore it again to a rugby match in Paris in 2017. Like the last time, Middleton wore it over an all-black outfit on Weds., letting the cuffs of her sweater peak out from the arms of the coat.

The mom of three paired it with the basic black skinny jeans that every girl owns and sleek lace-up booties by L.K Bennett. The suede footwear features a big block heel and silver hardware, giving her a slightly edgy look. Like the coat, they've been a staple in the royal's wardrobe for a while, too. She wore them with a lime-green dress earlier in the month.

Just days before her latest look, Middleton's sister-in-law Meghan Markle wowed in another Carolina Herrera number in Morocco. The pregnant duchess opted for a blue maxi with a dreamy floral print by the designer, who has long been a favorite of the royal family.

It's no wonder why Middleton keeps her bold red coat in rotation. What's a better way to dress up your go-to all-black winter outfits, anyway? Steal her look with similar red coats, ahead.

Get the duchess' look with this classic A-line coat in her go-to red hue.

Opt for this menswear-inspired, blazer-like coat with big metal buttons instead.

Give your classic overcoat an upgrade by going with a bolder color.

Everyone knows that Middleton loves a long coat. Cop her look with this fiery red, floor-length layer.

Ditch the buttons for this super-elegant tie-front coat. The duchess would absolutely approve.