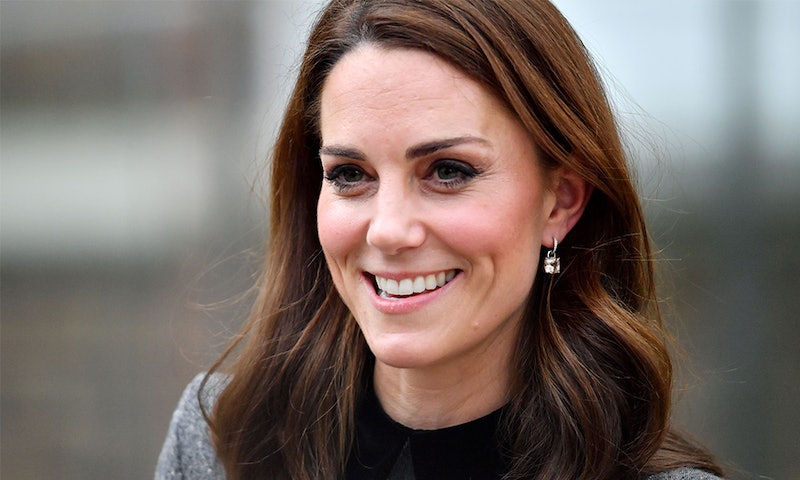 Kate Middleton just got some quality one-on-one time in with Queen Elizabeth during their first-ever solo engagement together. The 92-year-old monarch and her potential successor looked as different as they ever do (in the exact outfits you would have expected them to wear, too). The Queen's monochromatic skirt suit and Kate Middleton's gray coat dress couldn't have been more representative of their respective styles.

The royal women arrived together in a town car at King's College in London on Tues., where they participated in the official opening of Bush House, a new building on campus. It was a significant occasion for both, being their first joint public event since Middleton became a duchess nearly a decade ago.

Neither of them dared to switch up their looks for the historic event. Queen Elizabeth dusted off pale-pink cashmere separates she's worn before by her go-to designer Stewart Parvin and Middleton debuted yet another version of her favorite gray coat dress.

Any fan of the duchess' fashion already knows that a neutral coat dress is the biggest staple in her wardrobe. In the past, she's worn a similar version by Jesiré to the National Portrait Gallery, one by Alexander McQueen for her Singapore State Visit, and another by Michael Kors on Anzac Day in Australia.

If you were offered a glimpse into the duchess' closet, you'd most definitely see a grand array of gray coat dresses hanging inside, but none as chic as her latest bespoke number by Catherine Walker. Like her other Catherine Walker coat dress (and just about everything she wears), the piece features a fitted bodice and a flowy, pleated skirt.

This particular version, however, has a contrasting black collar and a belted waist, unlike the one she wore by the same designer in Nov. The lack of buttons in the front give it a sleek dress feel. Once again, Middleton paired it with black tights and chunky-heeled suede pumps by Gianvito Rossi.

Inspired by Kate Middleton's latest look? You should be. And lucky for you, you don't have to go bespoke to get it. The duchess' outfit is easier to recreate than you think with these similar pieces, ahead.

As you may well know, this royal adores herringbone. Cop her coat dress look with a warm wool-blend dress in the classic woven pattern.

You can go ahead and consider this ribbed-knit mini with feminine tie sleeves Middleton-approved.