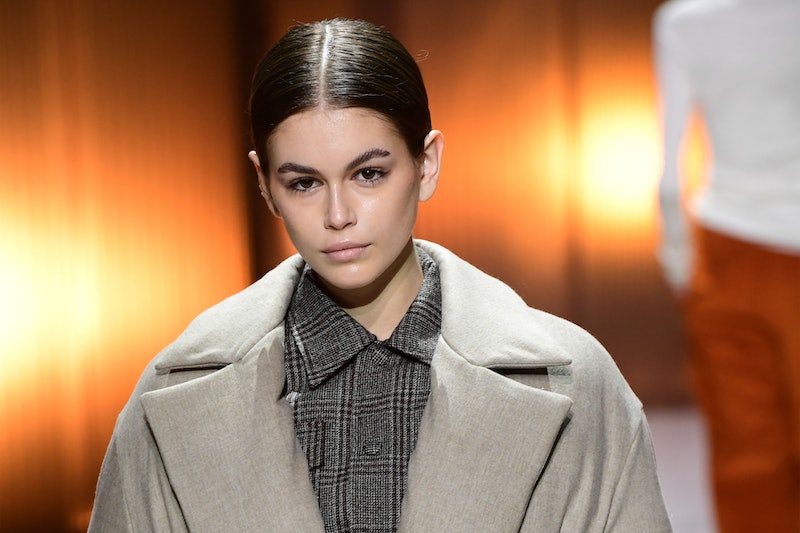 The familiar carefree aura of summer corresponds with a certain look: a fresh face, short, sun-bleached hair, a breezy white button-down with the top few left undone. Kaia Gerber embodies it, light blonde hair and all.

The model would normally be easy to pick from a lineup with her signature cocoa tresses, a Gen Z-ified carbon copy of her iconic mother, Cindy Crawford. Slowly, over the course of the year, the 18-year-old has been lightening up her look, first dipping a toe into the blonde (more like bronde) pool in April. This time, though, she dove right in.

Her recent Instagram selfie announced the freshly bleached look by way of a coolly unkempt bob swept all the way over to one side. She may or may not have subtly debuted the blonder-than-ever shade in an earlier post teasing her pant design for Bleusalt, but the caption on her latest self-portrait — "zoom bleach" — confirmed that it was, indeed, a dye job and not just a clever light trick.

Does this mean Gerber has taken the situation into her own hands and bleached her poor chocolate locks at home? Perhaps with a bit of video-chat guidance from a professional? Or not? She does have a history, after all.

Rebelling against just about every rule for DIY hair dyeing ever, the model — rather recklessly — admitted to "highlighting" her hair in April with ~actual~ hydrogen peroxide. (Do not try at home.)

"I literally put the straight peroxide on my hair and then dried it with a blowdryer — just to hit it with heat," she told Refinery29, "and it definitely lightened my color a shade or two, just a subtle change." She also noted that she found said method "online somewhere" and was skeptical of recommending it, to the presumed horror of colorists everywhere. A quick Google will reveal the many risks of bleaching at home: hair loss, scalp burns, rashes, allergic reactions... the list could go on.

In any case, the apparent DIY job turned out not to fry her dramatic bob to a crisp in the end. Instead, she wound up with a chic 2020 take on platinum, leaving an inch or two of brunette roots to peak through.

Inspired by Gerber's look? Put the bottle of peroxide down and go to a professional.