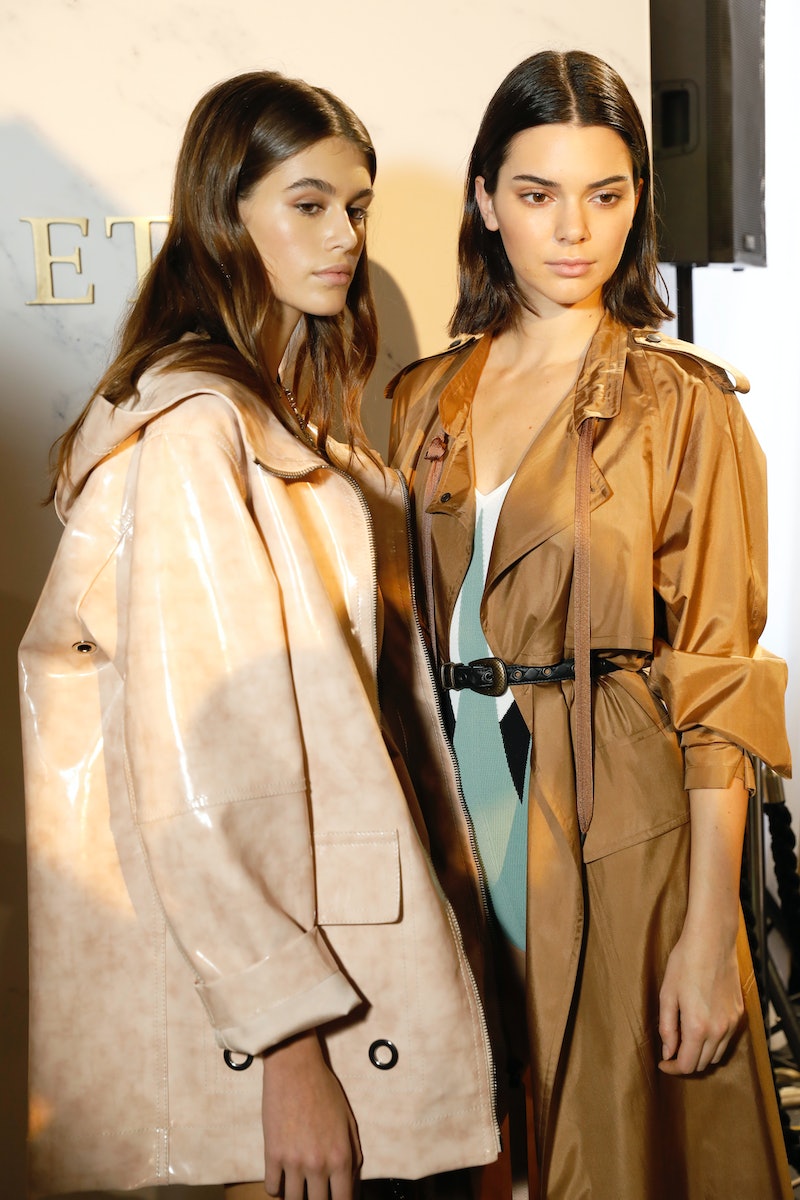 Back in Feb. 2018, Alexander Wang presented his final show at New York Fashion Week, after announcing that he would officially follow the pre-collection schedule moving forward. That meant that rather than presenting his highly anticipated ranges in tandem with the typical NYFW schedule, he would showcase them in June and Dec. Fans of the designer finally got what they've been waiting for on May 31, when Wang's star-studded 'Collection 1 2020' show took New York City's Rockefeller Center by storm — and it featured a very inspiring beauty moments on the likes of Kendall Jenner and Kaia Gerber.

The Big Apple's iconic Rockefeller Center was lit up more than usual on Fri. night, thanks to Wang's al fresco 'Collection 1 2020' runway show. As expected, the event drew in massive crowds, but it wasn't only industry elite and fashion editors who were able to take in the designer's latest range — which was actually split up into four different "acts," all of which paid homage to Wang's childhood heroes. The entire show was open to the public, with fans and passerby given the opportunity to witness the presentation from the upper plaza.

The four-part show included collections inspired by Donna Karan, Calvin Klein, and Ralph Lauren — Wang's childhood heroes. The first section hit on all-things workwear, but with the designer's signature twist. The jackets were oversized, and the blazers über structured. A tight black catsuit was a bold but practical alternative to a typical power suit. Section two played off of '90s minimalism, following an outerwear-as-underwear aesthetic that Calvin Klein helped make famous, while the third act was all about "preppy Americana" à la Ralph Lauren. Picture lots of suede fringe (on pants and jackets alike), Western-inspired shirts, and woven leather belts.

The fourth and final act saw the designer's model muses in pieces that felt most in line with Wang's usual design aesthetic (read: relaxed suiting, sportswear-inspired jerseys, and draped dresses). Kaia Gerber strutted down the runway in a twisted, off-the-shoulder LWD, while Kendall Jenner debuted a three-piece ensemble, consisting of baggy white capris, a white tank top, and an oversized jacket.

Both models donned white sock booties, but the one similarity that sent the beauty world into a frenzy? Gerber and Jenner's matching wet-hair look that's actually super simple to replicate. The best part? You really only need one product on hand to achieve the perfect post-beach 'do (without the sand, of course), deeming it the ultimate lazy-girl hairstyle to sport all summer long.

Wet-hair looks have been cropping up everywhere this season. Kim Kardashian West took the aesthetic to a whole new level with her 2019 Met Gala getup, which channeled a California girl stepping out of the ocean, while Shay Mitchell is known to sport the saturated look both on and off the red carpet.

Achieving this particular hairstyle is quick and easy. Simply start with damp, towel dried hair, eventually working a generous amount of strong-hold gel into your roots. Take the comb and brush it (and the gel) through your tresses from root to tip to create that slicked-back effect à la Gerber and Jenner.

Ready to try your hand at the ultimate lazy-girl summertime hairstyle? Ahead, shop The Zoe Report's roundup of must-have products to use to accomplish the wet-hair look with ease.