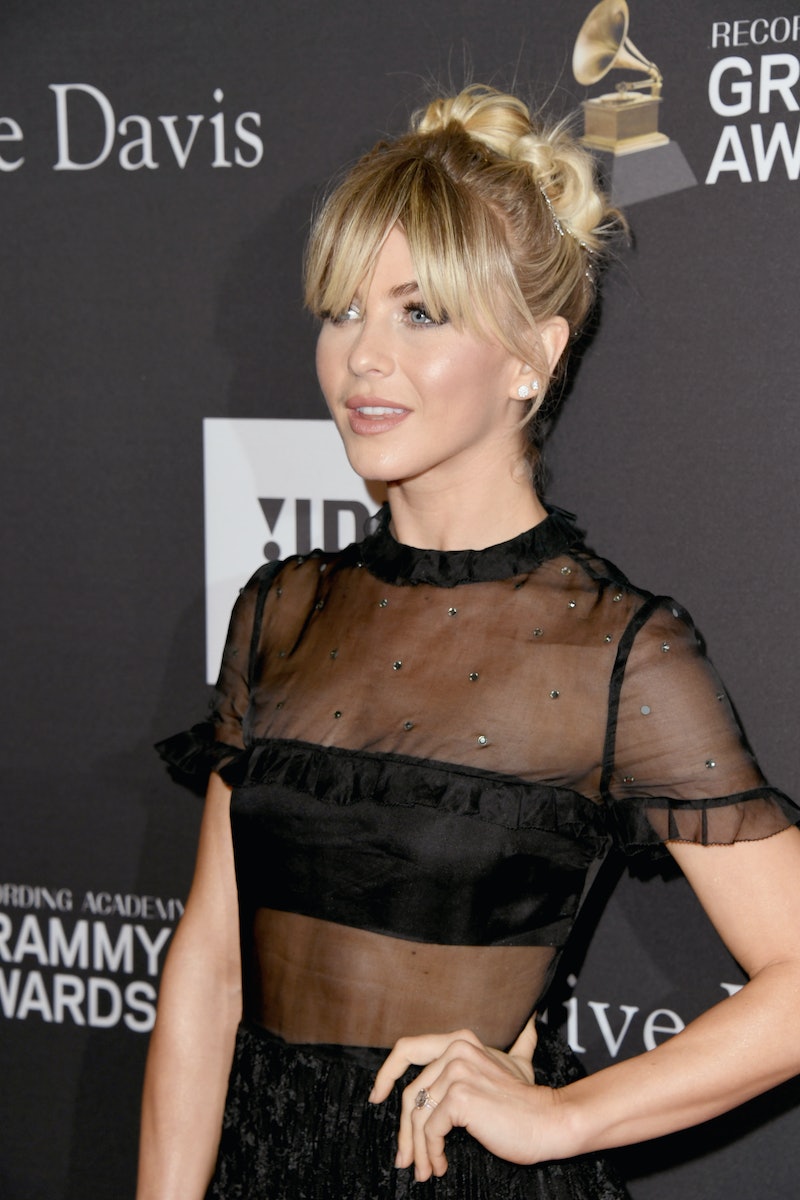 It's safe to assume your attention is currently being channeled across the pond right now as designers showcase their Spring/Summer 2020 collections and style stars are strutting their stuff in the streets before and after presentations — and you can't be blamed, because some seriously stylish things are going down (you've seen Kendall Jenner's freshly blonde tresses, right?). But that doesn't mean the fashionable folks stateside come to a grinding halt. There are plenty of chic moments cropping up, and Julianne Hough's bob haircut is proof. If you haven't made the chop yet, take Hough's cut as cue that this trend is here to stay for fall.

As a judge on America's Got Talent this season, the dancer and actor has had no shortage of glamorous moments both on-screen and while walking the red carpet. All along the way, Hough has stayed loyal to her bright platinum blonde lob, styling it wavy, slicked back, and in low ponytails. But at the AGT finale, which aired on Sept. 18 on NBC, the star debuted a shocking and much shorter new 'do when she stepped up for her photo op (in a stunning red sequin number and matching red lip, no less).

The polished true bob now falls a good couple of inches above her shoulders, where before it would graze those glam sequined ensembles she tends to favor on the AGT set. And according to Refinery29, Hough and her hairstylist Riawna Capri made the decision to do the chop impulsively backstage directly before the show's finale.

The only hint that fans got? An Instagram posted by Hough about a week before the finale aired, in which she's coyly wielding a pair of haircutting shears. At least now it's evident she didn't cut those golden locks herself.

In her first official outing with the fresh, on-trend bob (which follows the likes of Bella Hadid's new super-short hair and Courteney Cox's truncated, shaggy strands), Hough kept it incredibly sleek and straight, parted at the side and tucked behind her ears to showcase her famous baby blues, rosy cheeks, and a classic red lip. But to add a little interest, she opted for a sprinkling of gold glitter at her part, ensuring all eyes were on the spur-of-the-moment new style. If anything, this is the most shining example yet that a bob is in order for the season ahead.

While you dial up your salon to make the cut, grab some key sleek bob-perfecting products, below.

This heat-activated styling creamy balm is your sleek and straight blow dry secret. It's non-greasy and won't weigh your hair down, but will seal each strand so it's smooth, soft, and frizz-free. 500 five-star ratings don't lie.

One of Ulta's top-rated straighteners, this BaByliss Pro features a duo of ultra-thin ceramic plates that allow you to reach every last strand high up at the root for a sleek look from top to ends.

John Frieda's 3Day Straight Flat Iron Spray relies on a blend of keratin protein to protect and strengthen tresses and impart a super-glossy, smooth look. It'll also lock out frizz and ensure your straight style stays that way for a whopping three days.