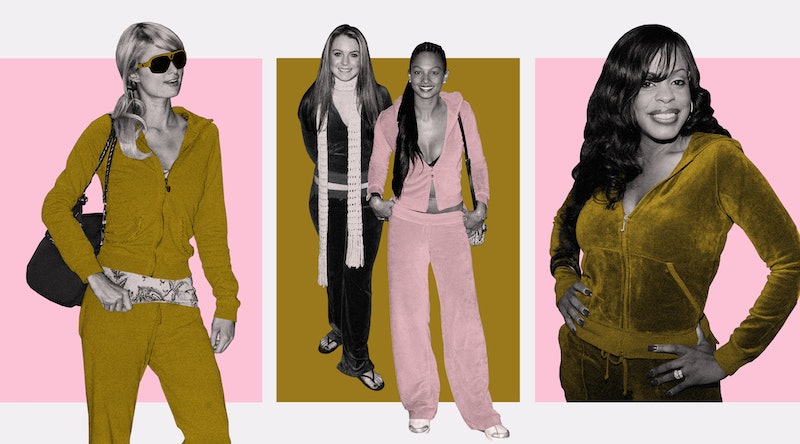 In 2001, a young, upstart brand called Juicy Couture introduced its tracksuit, and the world was never the same. Dramatic? Yes. But entirely hyperbolic? Not exactly. In the years just after Juicy’s 1995 launch, the U.S. was enjoying a prolonged period of unprecedented economic growth. It was the era of excess, and Juicy’s plush zip-ups and matching sweatpants became the bedazzled picture of a new kind of luxury.

“That cushy velour connotes the blasé, black-card concept of, ‘I have so much money, I can essentially wear pajamas out,’” says Liana Satenstein, senior fashion writer for Vogue.com. “There was a lot of money going around during that time, and people weren't afraid to show it.”

Deirdre Clemente, an associate professor of history at the University of Nevada, Las Vegas and the author of Dress Casual: How College Kids Redefined American Style, explains that tracksuits have roots in 1930s collegiate track and basketball teams. These sets were worn in the same way professional athletes do today, as warm-up gear personalized for the team and/or player. And before the body-hugging, candyfloss-velvet variety, tracksuits came in jersey, a then-revolutionary knit famously popularized by Coco Chanel herself.

Adidas is often credited with “inventing” the tracksuit, at least commercially: In 1967, the sportswear retailer released its inaugural apparel collection with a three-striped set made in collaboration with German soccer star Franz Beckenbauer. The garment has been taking on a life of its own ever since, becoming synonymous with everything from New York City’s hip-hop and rap culture in the 1980s to Britpop bands like Oasis and Blur a decade later.

Then along came Juicy, the brainchild of Pamela Skaist-Levy and Gela Nash-Taylor, two long-time friends who started their design career with maternity pants. In 1996, the pair moved on to launch rock-inspired graphic tees bearing the brand’s terrier-adorned logo.

“Officially, the Juicy tracksuit launched in 2001,” says Alexandra Taylor, SVP Marketing of Juicy’s parent company Authentic Brands Group, who has been with the label since it was acquired from Fifth & Pacific Companies, Inc. (previously Liz Claiborne Inc.) in 2013. “For [Skaist-Levy and Nash-Taylor] and really for the brand as a whole, the idea was to [create] more things that you would, at the time, consider ‘leisurewear,’ and do so in a more glamorous way.”

In 1999, two years before the Juicy tracksuit made landfall, Vanity Fair Contributor David Kamp forecasted the upcoming noughties to be what he called the “Tabloid Decade.” In retrospect, he wasn’t wrong: Before the dawn of social media, the relentless celebrity-gossip and paparazzi machine served as the bridge between previously-untouchable celebrities and the everyday layperson picking up People at their grocery store checkout line. There was such enormous demand for celebrities-as-content that the celebrities themselves started to game the system, staging curated off-duty moments to bolster whatever narrative needed telling. It was a game that Skaist-Levy and Nash-Taylor didn’t just know how to play, but one to which they wrote their own rules.

“Juicy was probably one of the first brands to embrace what we know today as influencer culture, with a grassroots celebrity-seeding strategy that would send out tracksuits to the celebrities [Skaist-Levy and Nash-Taylor] had connections with,” says Taylor. “Juicy was literally just infusing the market from a celebrity standpoint, whether celebrities were coming out of an airport or going into a store.”

Jennifer Lopez was one such figure. In 2001, Juicy gifted the pop star with a bubblegum-pink hoodie and matching sweat shorts to "chill and hang out in," she reminisced in a 2018 Instagram caption. Lopez ended up loving the set so much that she decided to wear it during the shooting of her “I’m Real” music video, in lieu of the couture her stylists had pulled. “I shocked everyone when I decided to wear it. It seemed fitting since the song is called ‘I’m Real,’ so I decided to be me!”

By 2002, Juicy started materializing on the red carpet, starting with early-aughts paparazzi princess Lindsay Lohan, who accessorized her forest-green tracksuit just as one did in those days: with flip-flops and a skinny scarf. But the garment didn’t truly reach that next, pop-culture-cementing dimension until Paris Hilton and Nicole Richie came in with the assist.

With the 2003 premiere of their iconic reality show, “The Simple Life,” Juicy tracksuits became their uniform, the frosted-blonde duo wearing them every day throughout much of the series’ five seasons. In 2004, Britney Spears even gifted her bridesmaids matching velour tracksuits for her secret wedding to Kevin Federline; while getting primped, she herself wore a white set with “Mrs. Federline” embroidered across the back.

The tracksuit’s skyrocketing success afforded the brand a new kind of trajectory. In 2003, the former Liz Claiborne Inc. acquired the company, and in 2004, the same year Spears wed Federline, Juicy opened its first store in — where else? — Caesars Palace on the Las Vegas Strip. Juicy was growing, and celebritydom was growing along with it.

Enter the big, messy Kardashian family: Keeping Up With the Kardashians aired in October 2007, the same month the stock market soared to an all-time high. Having worked as Hilton’s personal assistant years prior, Kardashian acquired fame on her own terms — and her fuschia tracksuit was present through all of it. Remember when paparazzi snapped Kardashian on her way to meet Kanye West — yes, really — for his appearance at the 2007 MTV VMAs? She was swathed in head-to-toe Juicy velour, with a monogrammed Louis Vuitton satchel on her arm.

Then, the Great Recession hit, and the concept of leisurewear was no longer sympatico with the worst economic downturn since the Great Depression.

“Post-recession celebrities now work really hard to demonstrate how hard they work,” writer and reporter Alex Ronan wrote in The Cut in June 2014, when Juicy was reported to be closing all its U.S. stores. “Instead of aggressively relaxing, many post-recession reality shows of the famous detail the often-grueling lifestyle of maintaining celebrity, which brings into sharper focus why Juicy sweats are so appealing in the first place.”

The Juicy tracksuit is not averse to controversy: Not only was the garment one of the most prevalent mascots of contentious tabloid culture, but it also represented the beginning of “athleisure” as we know it — a sector that still upsets the American public.

In 2016, two years after Ronan eulogized Juicy tracksuits in The Cut, The Washington Post published an editorial titled, “Yoga pants are comfy. They’re also an assault on manners and a nihilistic threat.” Juicy tracksuits weren’t yoga pants, though, but in fact, something even more egregious: They never once pretended to be anything more than an immortalization of that which once thrived beneath the Hollywood sign.

But something changed in the years following the tracksuit’s gradual decline: Consumers grew hungry, desperate, for an earlier, simpler time.

“Look at the state of the world — it's in shambles,” says Satenstein. “Nostalgia is a stellar limbo for millennials and Generation Z to float into. We're always looking back at the past, and idealizing that past. And it sure looks fun! Who doesn't want to imagine themselves as Paris Hilton, all cozy in a candy-hued velour Juicy Tracksuit, swiping her AmEx with not a care in the world?”

In March 2015, Juicy announced plans for a lofty reboot that banked on the same blinged-out sensibilities that tracksuits epitomized a decade prior. A year later, prized design collective Vetements linked up with Juicy on couture-ified tracksuits, and by 2017, the label hired celebrity stylist Jamie Mizrahi as its buzzy new creative director. And the brand is still rebounding, with a series of collaborations from Kappa to Apparis, the latter of which will debut Juicy’s first-ever faux fur tracksuit.

“It's become a cult item for Gen Z, and like any cult item, it has that cool factor, like, ‘I know about this moment in time. ‘I understand its nuanced cheek and the cultural boom behind it,’” says Satenstein. “I don't think it’s as polarizing anymore, whereas during the noughties, it was too mainstream, and felt maybe too brazenly rich, and flaunty. Now the narrative has flipped and cool kids are making it their own. If anything now, the Juicy tracksuit has become a unifier.”

Chief Gen-Z Cool-Kid Timothée Chalamet even wore his own ballet-pink velour hoodie in his November 2020 GQ cover shoot. If that doesn’t inspire shoppers to put their own spin on a tracksuit old or new, what will?

“It's definitely an item and a product that can make sense for any market or any age group, depending on how they want to bring it to life,” says Taylor. “It's a timeless piece that's allowed Juicy, the brand, as well as the tracksuit itself to live on and continue to be something that every generation makes their own.”