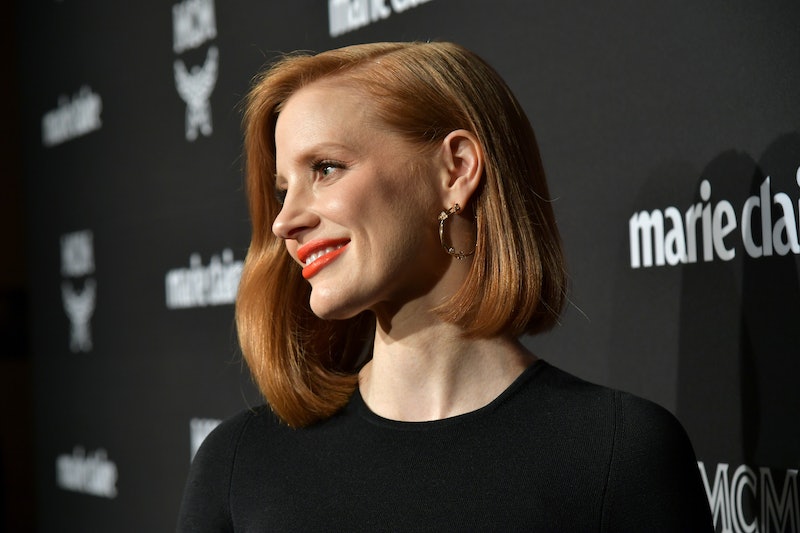 This season's biggest hair moments have been all about two things: short lengths and fun fringe. Charlize Theron recently rocked blunt baby bangs for the New York City premiere of Long Shot, while Julianne Hough shed some major inches ahead of the 2019 Billboard Music Awards. Now, it's Jessica Chastain's new bangs and bob that are making major waves in the beauty world, proving these two trends are here to stay. Get ready to pencil in some extra time in your schedule, because once you see her haircut, you'll want to book a salon appointment stat.

Chastain hasn't strayed much from her signature bob since it first made its debut in 2018. But on Tues., the actor showed off a slightly shorter cut and bold, can't-miss bangs, when she stepped out for a fan event for X-Men: Dark Phoenix in Mexico City. The unexpected beauty move was courtesy of celeb stylist, Renato Campora, whose impressive client roster also includes the likes of Priyanka Chopra, Naomi Watts, and Amber Heard.

Campora took to his Instagram on May 14 to show off a close up look of Chastain's hair makeover — and though many celebs have been opting for temporary clip-in bangs (read: Kendall Jenner, Bella Hadid, and Theron have all gone the faux route), it seems the actor's fringe is definitely the real deal, considering the caption included two scissor emojis.

Campora has already styled Chastain's new look in two completely different ways, both of which can be seen on the stylist's Instagram account. For Tues.' debut, the actor rocked soft, textured waves with her wispy bangs brushed to the side.

A day later, Campora took a drastically different approach — one that's bound to conjure up thoughts of Michelle Pfeiffer in the '80s cult classic, Scarface. And as it turns out, that's exactly what the hair pro was going for. "J e s s i c a~ C h a s t a i n ❤️❤️ #scarface vibe today," he wrote next to a close-up snap of the actor, whose bangs appeared noticeably blunter this time around.

Chastain is the latest celeb to jump on the bang bandwagon — and she's bound to inspire you to hop on, too. The best part about the eyebrow-skimming cut? You can style it countless different ways, whether sleek and straight or piece-y and brushed to the side.

The first step? Call your most trusted stylist and ask for versatile fringe à la Chastain. Then, shop The Zoe Report's roundup of easy-to-use texturizing (and smoothing) products, below.