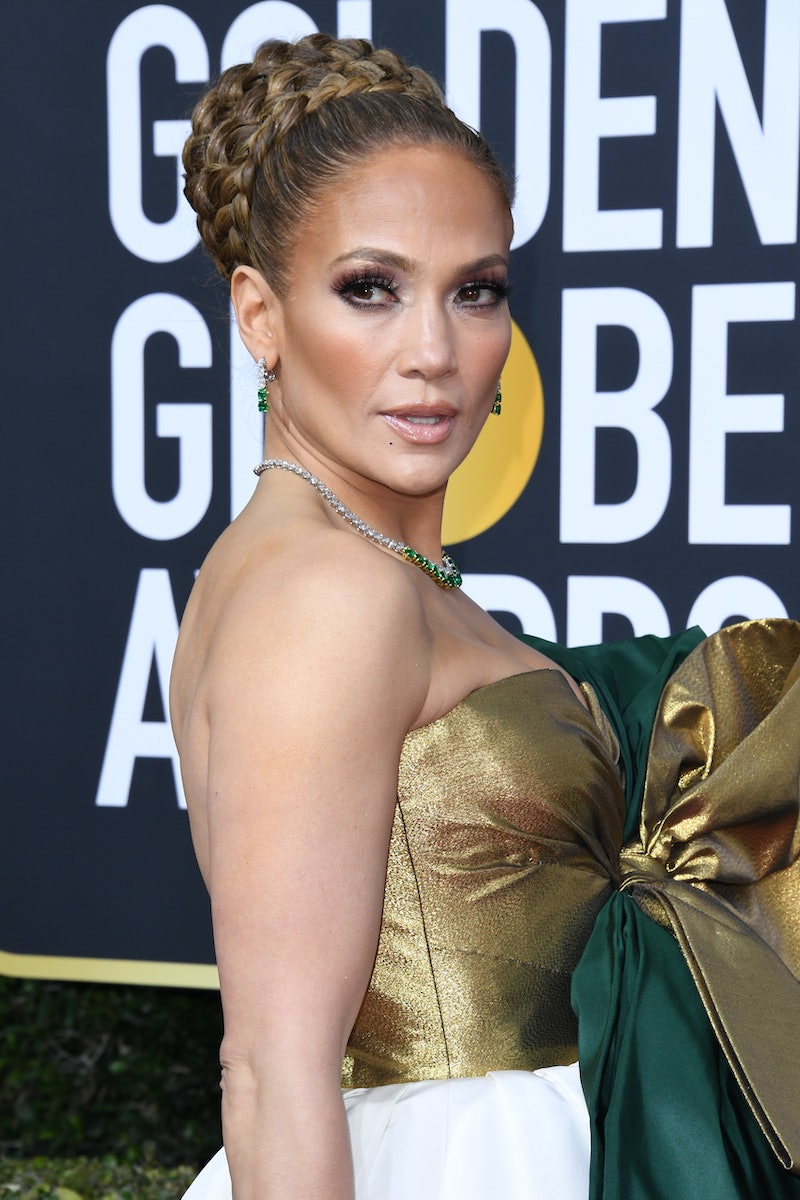 Of all the celebrities hitting the red carpet at the 77th annual Golden Globe Awards, Jennifer Lopez is arguably the most highly anticipated — and with good reason. The actor (nominated for Best Performance by an Actress in a Supporting Role in any Motion Picture for Hustlers) made quite the entrance in a tricolored strapless gown featuring a large, dramatic bow that covered her upper torso. However, the cherry atop the green, gold, and white cake was Lopez' Golden Globes hairstyle which was a braided bun, created by celebrity hairstylist Chris Appleton.

While the chignon's crown-like structure was a conversation starter on its own, there was something oddly familiar about the hairstyle that made everyone give it a second glance. If you were also hit with a wave of deja vu, that's because Lopez donned a similar look in her cult-classic 2002 film Maid In Manhattan. Yes, the modern-day Cinderella story included an iconic scene in which Lopez's character attends a glamorous ball to essentially break up with her love interest (played by Ralph Fiennes). She wears a borrowed gown and stuns in a beauty look that includes, that's right, an elaborate high bun. Quite the throw back, right?

Despite being filmed some 18 years ago, the hairstyle is clearly a classic one, and one that can be recreated easily for your next wedding or formal occasion. All it really requires is a sleek, high pony, braided, and wrapped at the base. If your hair is on the finer or thinner side, some added extensions could also help thicken the bun and give that dramatic J.Lo effect. For makeup, the singer went with her signature brown smoky eye and nude lip combo that always delivers an effortless smolder (and is also fairly easy to emulate as it happens.)

Also noticeably similar to her Maid In Manhattan moment were the glistening baubles complementing the updo. While the jewels used in the 2002 film were white diamonds, Lopez went for the color of the season at the Golden Globes, opting for emerald earrings and matching choker.

Thank you, J.Lo, for giving everyone a welcomed walk down memory lane.