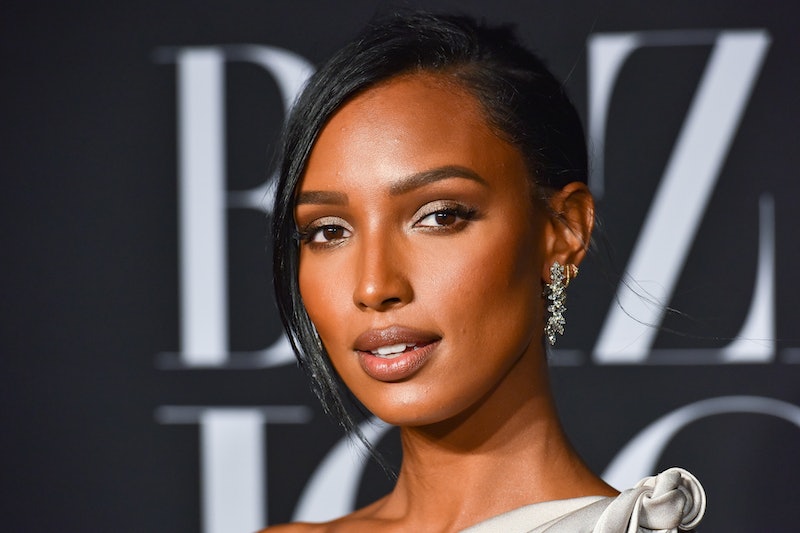 Pre-lockdown, Jasmine Tookes was seldom seen in anything other than sumptuous lingerie, face in full glam, strapped into a pair of Victoria's Secret Angel wings. Like most, though, the model has been exhibiting a more pared-down aesthetic lately, often involving a silky pajama set if not just a casual hoodie. And by the looks of her new Instagram video — in which she plugs her favorite everyday makeup products — Jasmine Tookes' beauty routine looks to have taken a minimalistic turn, too.

Anyone who frequents the model's YouTube channel knows that Tookes would make for a very successful beauty vlogger if she weren't already an established Victoria's Secret Angel. Between travel videos and closet tours, her cache is packed with tutorials and GRWMs. On Wednesday, her adventures in makeup made it onto her (followed by more than 4 million) Instagram feed.

Tookes laid out her entire work-from-home makeup regime in a 16-minute IGTV. In the caption, she says this 15-plus-step routine is her go-to for Zoom meetings, home shoots, "Insta work," and TikToks.

The model starts with a base layer of Laura Mercier's Tinted Moisturizer, followed by her "all-time favorite"MAC Cosmetics' Studio Fix Conceal and Correct Palette, which she calls the "perfect tones" for dark skin.

"I feel like drugstore makeup still hasn't really mastered great foundation and concealers for dark skin," she later said in the video. Most of the featured products hail from MAC Cosmetics, Hourglass, NARS, and Dior.

After concealer, she brushes a setting powder under her eyes, along her T-zone, and into her eyebrows, which she says get mysteriously oily, then proceeds to contour her nose with Bobbi Brown Bronzing Powder, buffing it into her eyelids. "I love when eyeshadow looks just like a gorgeous natural contour," she said.

For a subtle touch of warm smoke, she reaches for the Cozy and Flame shades in Tarte's Tartelette Toasted palette, brushing it into her creases and along her waterlines, then finishes the eyes with a sharp wing and Hourglass Unlocked Instant Extensions Mascara.

After a bit of blush and highlighter (both from Hourglass), she once again takes the MAC concealer palette and lines her lips with it — her favorite step. Tookes tops off her low-key work-from-home beauty with lip liner from Maybelline (the sole drugstore brand cameo) and a swipe of the now sold-out YSL + Zoë Kravitz Rouge Pur Couture lipstick, "the most perfect nude for darker skin."

The model calls out more than a dozen products in the IGTV video. Some highlights to recreate it, below.