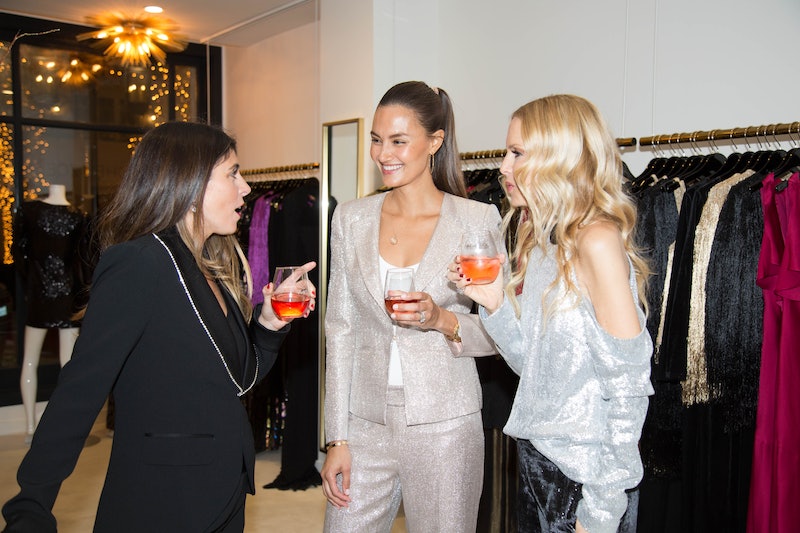 While it is easy to get swept up in December's festivities, supporting charities is an important endeavor—particularly during the holiday season. In an attempt to marry the gift-buying frenzy with fundraising, model Anne Marie Kortright and stylist and Zoe Report Founder Rachel Zoe teamed up to support their friend, Soprano's star Jamie-Lynn Sigler, who has Multiple Scleroris, with a shopping event in Zoe's Palisades store. The jubilant holiday event — featuring a 10 percent discount on every item in Zoe's collection, with 20 percent of proceeds going to The Tisch MS Research Center of New York — had an impressive turn out of friends and supporters.

Sigler, who came forward about her condition in 206 after 15 years of dealing with the degenerative disease in private, is one of the few celebrities known to be dealing with MS. Kortright, who is also based in L.A., was hosting to support the cause she's heard so much about as a longtime friend of Sigler's. It also felt good to host a meaningful event amidst all of the consumption-for-consumption's-sake holiday celebrations. "Asking people to come and shop for a cause, and raising awareness, is so much more worthwhile than mindless buying," says Kortright. Zoe, who is hosting a handful of philanthropic events in her store this month, agreed with that sentiment. "MS is such a horrendous and mysterious disease, so giving to research efforts to help find a cure while also raising awareness is very important to me," she says.

Sigler, who is involved with the Tisch Center, was particularly touched, "Rachel and Anne Marie approached me with this whole idea fully formed, and as someone who doesn't like to ask for help, it was really such a lovely gesture." I got a chance to talk with her about her experience with MS and her hopes for helping sufferers cope with the disease.

Multiple Sclerosis is a chronic, degenerative disease affecting the nervous system, specifically the myelin sheath of nerve cells in the brain, optic nerve and spinal cord. The disabling and painful symptoms range from fatigue, blurred vision, loss of balance and poor coordination, to slurred speech, tremors, paralysis, blindness, and failure of organ function. In addition to these symptoms, Sigler notes another major challenge is the isolation experienced by people with the disease, "MS to many people is an invisible disease. It's a group that largely suffers in silence because people are hesitant to tell people they have it. And people don't really understand what it looks like."

Sigler is doing her part to raise awareness by being open about the impact it does and doesn't have her on life in the hopes of inspiring hope in others, "I'm one face of a mask [of many sufferers], but I'm an independent woman, I have two kids, I'm a working mom, I'm very involved in every area of my life — I can push through and forward."

She is also working closely with the Tisch Center, helmed by Dr. Saud A. Sadiq, who is also her personal doctor, to support their research efforts. "He is tirelessly running the only FDA approved stem cell research study in the US right now," says Sigler, and they're making great strides. The first phase of the study successfully demonstrated a reversal of disability, with 70 percent of participants showing an increase in muscle strength. While the study is promising, it is still in its infancy and the daily lives of most MS sufferers are yet to be impacted. Sigler says the best strategy for people suffering from the disease is to create a support network. "I recommend reaching out to your friends and family. There is a lot of relief and power when you're open about it, and finding a group of people who know and protect you makes a world of difference."

Click here to donate to the Tisch Center for MS Research.