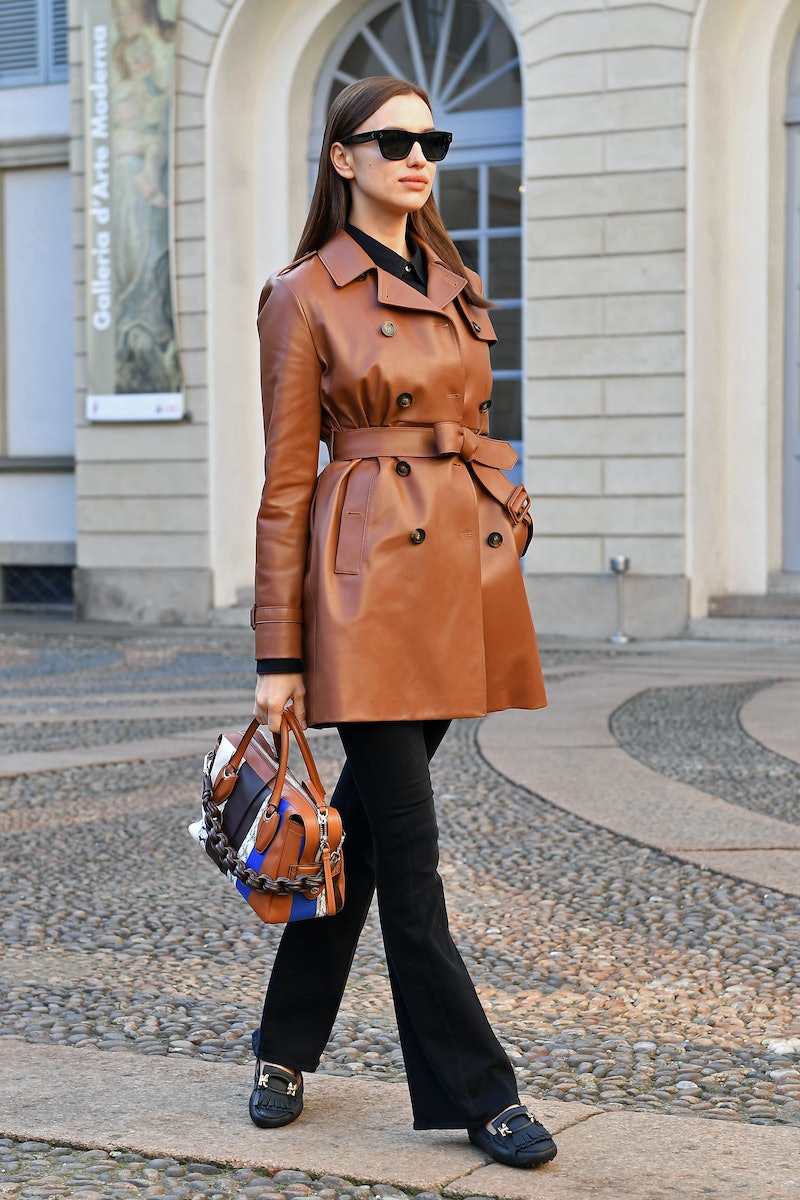 If you've long been on the search to find elegant shoes you can wear for work and play, you'll be so happy to know it officially ends with Irina Shayk's black loafers. The model just found a pair of flats that prove comfort and style are not mutually exclusive when it comes to your footwear. Prepare to kick your classic black heels aside for an equally chic alternative that you can wear all day long — sans foot pain.

Shayk has taken her impeccable style to the streets of Italy, jet-setting to the European country for Milan Fashion Week. On Weds., prior to walking the runways for Max Mara and Moschino, the model was snapped at the airport in the most perfect travel uniform. Two days later, she walked around the fashion capital in an equally covetable getup you'll want to recreate ASAP.

On Feb 22., the 33-year-old was seen arriving at the Tod's Fall/Winter 2019 runway show in black flare jeans, a black button-up, and a light-brown, double-breasted leather trench coat — an outerwear piece celebs like Kendall Jenner, Kaia Gerber, Bella Hadid, and Kourtney Kardashian have also sported recently. Black Celine sunglasses offered up some UV protection, while a blue, white, and light-brown handbag coordinated flawlessly with her coat.

Shayk grounded her outfit with black Tod's loafers — a pair that strikes the ultimate balance between comfort and style. What's more, they effortlessly prove that heels aren't the only shoes with the power to take a look to new heights.

What makes Shayk's loafers so chic is their elevated design. They feature gold-tone hardware detailing and a fun fringe front that takes simple black flats to a whole other level.

Shayk isn't the only celebrity to offer up a stylish, more comfortable replacement for classic pumps. Meghan Markle, who rarely trades in her heels for any other shoe, has been playing favorites with a pair of slipper-like flats that are so sought after, they've garnered a 15,000-person waitlist.

So, anyone who considers themselves to be anti-heel can officially rejoice, because Shayk just found a smart and sophisticated alternative. Ahead, shop the model's exact Tod's loafers, as well as The Zoe Report's favorites that are great for all-day wear.

A pearl-adorned sole elevates these simple, sophisticated loafers. Wear them with your favorite skinny jeans, leather trousers, or a classic LBD.

These & Other Stories loafers are a more affordable replica of Shayk's. Much like hers, they're decorated with eye-catching gold hardware that pops against the black leather upper.

Save money, but don't lose out on style, with these Halogen loafers that cost just under $100. The patent leather upper is ideal for rainy spring days, too.