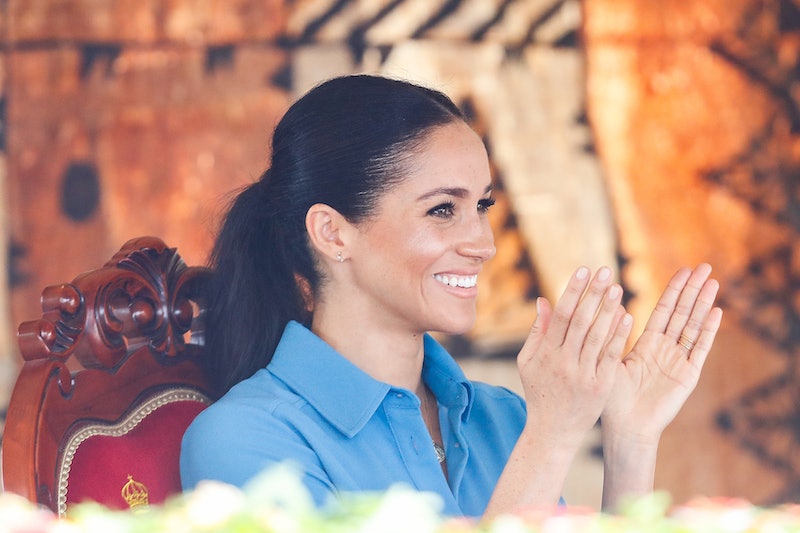 It's become common knowledge that anything the Duchess of Sussex wears is bound to sell out within minutes or, sometimes, even seconds after its royal debut. If you want to get your hands on a Markle-approved piece, acting fast is key. And while the Meghan Markle effect can make it seem nearly impossible to scoop up the royal's favorite pieces, brands are luckily churning out restocks at impressive rates. Get your credit cards ready, because Meghan Markle's go-to black flats are officially on the market again — and they won't be for long.

Markle has a thing for sleek pumps, but during her and Prince Harry's 16-day tour of Australia, New Zealand, Fiji, and Tonga back in Oct., she proved she's certainly not against trading in her heels for a flat-soled shoe. First, she stunned the world when she was photographed in a pair of sneakers for the first time since joining the royal family. And then, she managed to find the most perfect footwear pick for anyone who can't stand to wear heels: a pair of black flats from Birdies.

Markle chose to wear the black, slipper-like flats with a more sporty-casual look, combining them with simple black skinny jeans, a high-neck sweater, and a warm puffer coat. She styled her hair in a loose, low bun, and went for her signature no-makeup makeup look. The Duchess could just as well have picked sporty white kicks as the grounding element, but the choice of a slightly fancier shoe offered up a welcomed touch of sophistication without sacrificing comfort.

The flats Markle wore while leaving the Redwoods Treewalk in Rotorua in Oct. sold out immediately, garnering a 15,000-person waitlist along the way. But if you missed your chance to score the ideal anti-heel shoe, you're in luck, because your second opportunity just arrived.

On Tues., the brand officially restocked Markle's favorite style: the Starling, a velvety black slipper designed with quilted insoles and memory foam for added comfort that, wait for it, rings in at just $120. It's likely they'll sell out fast this time around, too, so it'd be wise to buy them sooner rather than later.

Sure, Markle's flats are incredibly comfortable, but the styling possibilities that come with them are nearly endless. Rock them with your go-to LBD, a pair of plaid trousers, or use them to dress up distressed jeans.

Ahead, shop Markle's exact black flats while they're still in stock, as well as The Zoe Report's handpicked selection of shoes inspired by the Duchess.

There's just so much to love about this fashion and comfort-focused shoe — and once you slip into them, you'll understand the hype.

These suede loafers will make your outfit appear incredibly polished in an instant. Bonus: The glistening gold heel adds an eye-catching and luxe detail.

Pearls are on the rise, and this black buckle loafer offers up a great way to get in on the trend, especially if you don't like wearing jewelry.

These are certain to become your new pair-with-everything shoe, especially once the warmer weather rolls around.

If you want a loafer that's a bit more casual-leaning, look toward these from Mango. This brown leather style pairs perfectly with vintage-wash jeans or light-brown trousers.